Going back to uni during a pandemic: part II

In the first part of this article we explored what mathematical models tell us about COVID-19 epidemics in universities, and they impact that testing and tracing might have. We now look at two other measures that can help mitigate an epidemic: reducing students' social contacts and making lecture rooms safe.

Testing isn't of course the only way of mitigating an epidemic. Another is reducing social contacts. The results of Brooks Pollock and her colleagues already suggest that not mixing together first years in halls of residence, but housing them with people studying the same course, can help. A slightly more extreme way of reducing contacts is to put students into smaller bubbles. Ideally, people within a bubble would live together, take the same classes together, socialise together, and have minimal contacts outside the bubble. If someone in a bubble is found to be infected, then the entire bubble will self-isolate immediately. 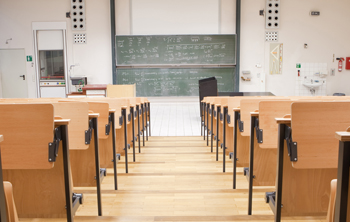 For the moment large lectures will take place on-line.

This idea has been explored by mathematicians from the Virtual Forum for Knowledge Exchange in the Mathematical Sciences (V-KEMS), who already looked at the problem of unlocking higher education back in June, in a two-day virtual study group hosted by the Newton Gateway to Mathematics. V-KEMS considered the population of freshers on a typical campus university. They used two compartmental models, one to get an idea of the effect of bubbling on the size of an epidemic on campus, and one to see how bubbling might affect a testing regime.

Unsurprisingly the models suggest that smaller bubbles (e.g. size 12) are better at curbing an epidemic than larger ones (e.g. size 48). However, as was pointed out at the IDP sessions, small bubbles stringently enforced during the week are a recipe for wild, illicit parties on the weekend. These can quickly drive up the effective reproduction number (the famous R value). And as V-KEMS' models also suggest, once the R value is sufficiently high (around 0.4 or bigger) the bubble sizes really don't make much of a difference anymore.

The models also suggest, however, that a good testing regime can liberate students from small bubble claustrophobia: the more testing there is, the bigger the bubbles can be. You can find out more about these results in V-KEMS' working paper on unlocking higher education. The authors stress that their findings are preliminary and tentative: the models have been put together very quickly, they rest on a number of assumptions, and could benefit from better estimates of parameter values. But they give a starting point for modellers to work from.

While socialising is a hugely important part of student life, we shouldn't ignore the main purpose of higher education institutions, which is to teach people. As of the beginning of July 90% of higher education providers said they will go for a blend of online and face-to-face classes. For example, lectures may be held online only, with small tutorials taking place in person.

But how risky is face-to-face teaching and how should classes be organised? That's another problem V-KEMS mathematicians began to explore at their initial workshop in June and which they reported on at the IDP sessions.

If there's an infectious person in a class, that person can pass the disease on via two routes: through the air by breathing and speaking and via the surfaces they touch. Both routes of transmission can be simulated using models, which the V-KEMS team tailored to a typical lecture room containing as many people as social distancing will allow. Wherever possible, parameter values - such as how many particles are released when people breathe or speak and the length of time the virus can survive on a surface - came from the latest research being done on the virus. 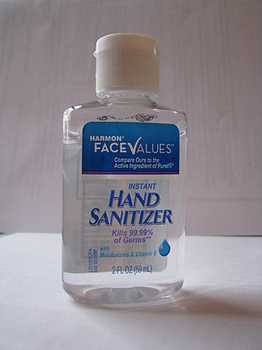 Cleaning, both of hands and of surfaces, makes a difference. Image: Simsala111, CC BY-SA 3,0.

Although these models are only preliminary they already give interesting insights. A reassuring point is that cleaning of desks, both by students at the end of the session and cleaning staff, really does help. But since even a clean surface should really be left alone for a couple of hours this should be combined with hot-seating: students from one class should not sit in the same seats as the students from the class before. This could quite easily be arranged, for example by colour coding seats.

A headache threatens, however when you compare airborne and surface transmission. One thing that would reduce the risk of airborne transmission, so the V-KEMS model suggests, is to have shorter teaching sessions, which makes sense: the less time there is for people to breathe and talk at each other, the lower the risk of airborne infection from an infected individual in the class. (This applies as long as the class is small enough; if you allow in more students, so there is less social distancing, then the increased risk of transmission swamps out the benefit of shorter classes.)

But unfortunately, this stands in tension with what the V-KEMS model for surface transmission suggests. As far as catching the virus from surfaces is concerned, it's better to have longer classes, as these mean less moving about and touching of desks and seats throughout the teaching day.

V-KEMS mathematicians are exploring this issue further. In the end the amount of face-to-face teaching students will get will also depend on other factors, such as how much space there is available to accommodate socially distanced groups, a potential need for staggered timetables to avoid congestion, and available staff time. One thing that seems clear is that the need for social distancing will lead to longer teaching days at many universities.

At the moment there isn't a clear answer to this question. Principles for managing transmission in higher education, issued by the UK Government at the beginning of September (and building on some of the work mentioned in this article), stress the need for testing and tracing, for a reduction of face-to-face teaching and environmental measures such as cleaning regimes, and for a reduction of students' social and household contacts. But they also stress that the situation is evolving rapidly and that new evidence might change the guidelines.

One thing all participants of the IDP sessions (and the Government principles) agree on is that good communication is hugely important. Students and staff need to know that higher education providers are doing their best in an unprecedented situation, but that some things we simply cannot be sure about yet. The role of mathematical models is to give us the best possible idea of how well different interventions will work, based on the available data. Experience over the next few months will confirm which approaches work best — and provide more data to inform the models that will help deal with COVID-19 in the long run.