An international team of astronomers has proved the existence of a gravitational vortex around a black hole, solving a mystery that has eluded astronomers for more than 30 years. The discovery will allow astronomers to understand the behaviour of matter very close to black holes. It could also open the door to future investigation of Albert Einstein's general theory of relativity. 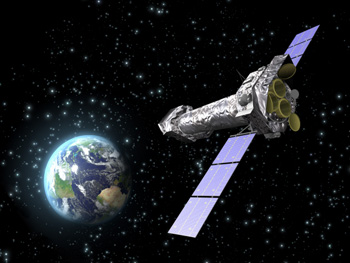 Matter falling into a black hole heats up as it plunges to its doom. Before it passes into the black hole and is lost from view forever, it can reach millions of degrees. At that temperature it shines x-rays into space.

In the 1980s, astronomers discovered that the x-rays coming from black holes vary on a range of timescales and can even follow a repeating pattern with a dimming and re-brightening taking 10 seconds to complete. As the days, weeks and then months progress, the pattern's period shortens until the oscillation takes place 10 times every second. Then it suddenly stops altogether.

This phenomenon was dubbed a quasi periodic oscillation (QPO). During the 1990s, astronomers began to suspect that the QPO was associated with a gravitational effect predicted by Einstein's general relativity which suggested that a spinning object will create a kind of gravitational vortex. The effect is similar to twisting a spoon in honey: anything embedded in the honey will be "dragged" around by the twisting spoon. In reality, this means that anything orbiting around a spinning object will have its motion affected. If an object is orbiting at an angle, its orbit will precess – in other words, the whole orbit will change orientation around the central object. The time for the orbit to return to its initial condition is known as a precession cycle.

In 2004 NASA launched Gravity Probe B to measure this so-called lense-thirring effect for objects orbiting around Earth. By analysing the resulting data, scientists confirmed that the spacecraft would turn through a complete precession cycle once every 33 million years. Around a black hole, however, the effect would be much stronger because of the stronger gravitational field: the precession cycle would take just a matter of seconds to complete, close to the periods of the QPOs.

An international team of researchers has used the European Space Agency's XMM-Newton and NASA's NuSTAR, both x-ray observatories, to study the effect of black hole H1743-322 on a surrounding flat disc of matter known as an accretion disk. 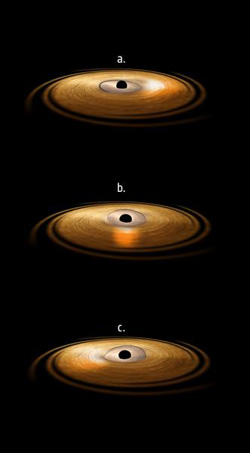 Close to a black hole, the accretion disc puffs up into a hot plasma, a state of matter in which electrons are stripped from their host atoms. The precession of this puffed up disc has been suspected to drive the QPO. This can also explain why the period changes: the place where the disc puffs up gets closer to the black hole over weeks and months, and, as it gets closer to the black hole, the faster its precession becomes.

The plasma releases high energy radiation that strikes the matter in the surrounding accretion disc, making the iron atoms in the disc shine like a fluorescent light tube. Instead of visible light, the iron releases X-rays of a single wavelength – referred to as a line. Because the accretion disc is rotating, the iron line has its wavelength distorted by the Doppler effect: line emission from the approaching side of the disc is squashed — blue shifted — and line emission from the receding disc material is stretched — red shifted. If the plasma really is precessing, it will sometimes shine on the approaching disc material and sometimes on the receding material, making the line wobble back and forth over the course of a precession cycle.

It is this wobble that has been observed by the researchers.

"Just as general relativity predicts, we've seen the iron line wobble as the accretion disk orbits the black hole," says Matt Middleton of the University of Cambridge. "This is what we'd expect from matter moving in a strong gravitational field such as that produced by a black hole."

This is the first time that the lense-thirring effect has been measured in a strong gravitational field. The technique will allow astronomers to map matter in the inner regions of accretion discs around back holes. It also hints at a powerful new tool with which to test general relativity. Einstein's theory is largely untested in such strong gravitational fields. If astronomers can understand the physics of the matter that is flowing into the black hole, they can use it to test the predictions of general relativity as never before — but only if the movement of the matter in the accretion disc can be completely understood.

"We need to test Einstein's general theory of relativity to breaking point," adds Adam Ingram of the University of Amsterdam. "That's the only way that we can tell whether it is correct or, as many physicists suspect, an approximation — albeit an extremely accurate one." (See here for more.)

Larger X-ray telescopes in the future could help in the search because they could collect the X-rays faster. This would allow astronomers to investigate the QPO phenomenon in more detail. But for now, astronomers can be content with having seen Einstein's gravity at play around a black hole.

Adapted from a press release by the European Space Agency, licensed under a Creative Commons Attribution 4.0 International License.