How new geometries reshaped our world

Judith Grabiner Share this page
This article is based on Grabiner's talk at the Ada Lovelace Symposium. You can watch a video of the talk below.

In the first part of this article we saw how the ancient Greeks' notion of geometry permeated centuries' worth of human thought: from science and philosophy to politics and art. The early 19th century, however, experienced a geometrical revolution. People realised that space didn't have to be exactly like what the ancient Greek Euclid had implied. In this article we'll see how this realisation shaped philosophy, science, culture and art.

Before we do that, let's start with an experiment. Imagine a plane containing a straight line L and a point P that's not on L. How many lines are there in your plane that are parallel to L and pass through P? 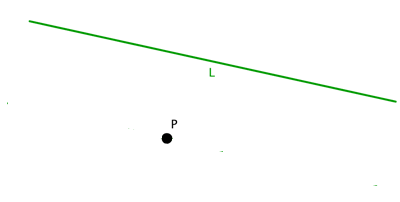 How many lines are there that pass through P and are parallel to L?

If your answer is "obviously only one" then your intuition is firmly Euclidean. Euclid also believed — and proved— that there could be only one (in fact the result follows from the fifth of Euclid's postulates of geometry, see the box).

But what if you consider lines drawn on a surface other than the flat plane? The picture below shows a saddle-shaped surface called a hyperbolic paraboloid: 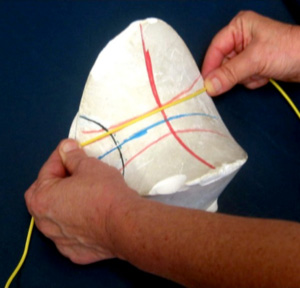 The lines drawn on the shape are the "straight lines" of the paraboloid: they are paths of shortest distance between points. But notice that the red and yellow lines are both parallels of the blue line, yet they pass through the same point. What's more, the blue and yellow parallel lines are not everywhere the same distance apart, as you would expect from parallel lines on the plane.

It turns out that the hyperbolic paraboloid forms a perfectly decent geometric space. It's this realisation — that space doesn't have to be as Euclid and our intuition suggest, but could be otherwise — that 19th century thinkers found so revolutionary. Carl-Friedrich Gauss, one of the discoverers of this fact, never even got up the nerve to publish his work on this subject. But as was shown by the mathematician Bernhard Riemann (among others) there are many more non-Euclidean spaces besides the hyperbolic paraboloid, including positively curved spaces and spaces of three or more dimensions (you can find out more here).

Now let's turn to the impact of this realisation on human thought.

The philosophy of space

Once you start thinking about the nature of space, you soon arrive at the question of what space actually is. Is it a thing? Is it a substance? Is it even real? The philosopher Immanuel Kant said that space is in the mind: when we make a geometrical construction, it's not the shapes we draw on paper that are important, but the way we see them in our mental space. We order our perceptions in our mental space and its properties are the same for all human beings. Kant's space was Euclidean. It's hard to imagine ordering our perceptions in a non-Euclidean space, so perhaps non-Euclidean spaces are not really as real as Euclidean space.

But we can do it, said the physicist Hermann von Helmholtz. For example, look at the reflections in a convex mirror. You may have one of these on your car. The mirror image is a three-dimensional non-Euclidean space. Note the parallel lines that form the top and bottom edges of the supermarket shelves not always being the same distance apart. Can we learn to order our perceptions in such a space? If you've made it safely so far using your car's convex mirror, the answer is "yes". 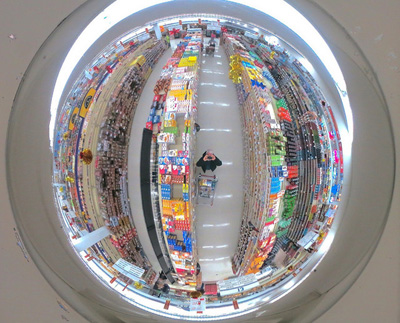 You might say that the mirror is just an illusion, and that only our own world, the Euclidean world, can be real. But are you really that sure? The further-away people in the convex mirror appear smaller than they actually are, but if a yardstick were attached to them, the yardstick would also appear much smaller, so measurements within the mirror would be as consistent as they are in our world. The person in the mirror, your reflection, could equally insist that only the mirror world is real. It's hard to argue — as Helmholtz says, there is no geometrical experiment that you can do that will decide the question of which one of these worlds is the real one.

So in contrast to Kant, Helmholtz thought that the postulates of geometry are not dictated by the human intellect or by logical necessity. For Helmholtz, whether space is Euclidean or not is a question for experience.

And here's an even more radical view. Henri Poincaré also saw the new geometries as revolutionary, but he disagreed with both Kant and Helmholtz. If, as Helmholtz said, geometry came from experience, geometry would not be an exact science. Still, Poincaré knew that we have more than one kind of space in our minds. So, the postulates of geometry are not synthetic a priori intuitions (as Kant said), they're not experimental facts (as Helmholtz said), and they aren't necessary self-evident truths (as the previous thinkers Descartes and Lagrange had said). Geometrical axioms, says Poincaré, are conventions.

So, how should we decide which conventions to use — those of Euclid, or one of the new non-Euclidean ones? Poincaré said that our choice may be guided by experience, but — as long as we avoid contradictions — it remains free. "What are we to think of the question: is Euclidean geometry true? The question has no meaning. We might as well ask if the metric system is true, and the old weights and measures are false. One geometry cannot be more true than another; it can only be more convenient."

This was a revolutionary shift of viewpoint: mathematics no longer exactly fits reality, instead we choose the mathematical model that does best what we want it to do.

The psychology of space

Even before non-Euclidean geometry, philosophers, like Bishop Berkeley, pointed out that we don't see distance. What we see are visual angles — we infer the geometry of what's out there from the angles that we actually see.

Here's a very easy example of what they mean. Look at the corner of a room, where the ceiling and the two walls meet. 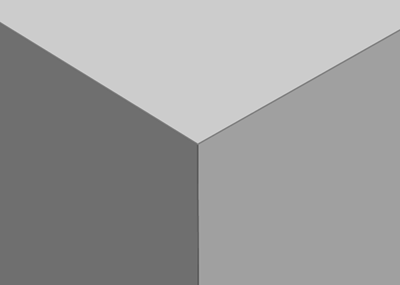 These are clearly three 90-degree angles are coming together. But if you measure the individual angles as they actually appear, each of the angles is greater than 90 degrees. Our visual space is not the same as the space we claim that we see.

The invention of non-Euclidean geometry made psychologists think a lot about such things. Helmholtz, for example, did an experiment where he asked people in a dark room to arrange little points of light on a table into two parallel lines that get progressively farther away. But the lines these people made out of these points of light weren't parallel but turned out to curve away from the observer. Helmholtz thought that visual space was non-Euclidean. The prevailing view now is that the space of visual perception isn't represented by any consistent geometry.

This is all European material. What happens in other cultures? The cultural linguist Steven Levinson has shown that people in different cultures have other ways of ordering their perceptions than in an external Euclidean space.

In our own culture, GPS navigational systems are changing people's supposedly innate intuitions of space from something absolute to something that is all about the relation between objects. I once asked a taxi driver in Maryland if his GPS system had changed how he thought about space. He said, "Yeah! I used to have the whole geography of greater Baltimore in my head. I don't any more. Like to take you somewhere, say, I'll turn left out of the airport, take the expressway to such-and-such exit, then turn right. And when I leave you off, I'll just reverse that — turn left, get on the expressway, turn right into the airport. I'll get back, but — I won't know where I've been."

One especially interesting thinker on the topic of space was the Spaniard José Ortega y Gasset. Ortega used the new geometries to argue that provincialism — assuming that our own experience or values are universal — is wrong. Euclidean geometry, Ortega says, was provincial. It was an unwarranted extrapolation of what was locally observed to the whole universe.

Ortega said that reality organises itself to be visible from all viewpoints. "Einstein's theory of relativity, which requires new geometries of spacetime, promotes the harmonious multiplicity of all possible points of view." Not just for mathematics and physics, but also for politics and culture. There is a Chinese perspective, Ortega says, that is "fully as justified as the Western."

The new geometries inspired many types of artistic freedom.

To cite just one example, look at this portrait of Pablo Picasso, painted by Juan Gris in 1912. It's a perfect example of what Ortega called "reality organising itself to be seen from all points of view." 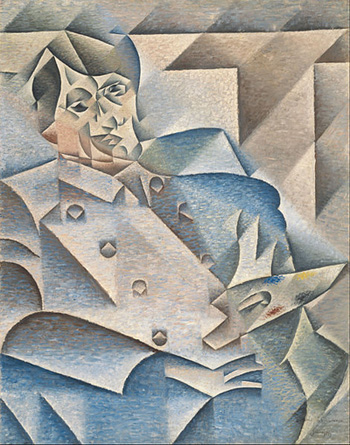 Notice the planes and angles from multiple points of view, especially in the face. And Picasso is not placed in a visually graspable three-dimensional space at all. Other artists, including Cubists and Surrealists such as Man Ray, were also impressed by the rise of the new geometries.

Now let's turn to architecture. For instance, take Zaha Hadid, the first woman to win the Pritzker Architecture Prize. As an undergraduate she specialised in mathematics. Here's what she says about the world of the twenty-first century: "The most important thing is motion, the flux of things, a non-Euclidean geometry in which nothing repeats itself, a new order of space."

Here's another building that became internationally famous recently. The roof is another hyperbolic paraboloid. It's the Olympic Velodrome in London.

So, artists are influenced by the new geometry, they cite its authority and its prestige on their behalf, they use it as part of their creation of self-consciously modern art, and they help us see a different world.

Euclidean geometry said, "Reason can figure out the whole universe, and it's symmetric and stable and uniform and there's a reason for everything, and everybody who studies it will come to agree." That's not the world we live in now, and the creation of non-Euclidean geometry had a lot to do with the way all of us see the world that we do live in.

By the way, the type of geometry can be measured