When Einstein formulated his general theory of relativity he noticed something disturbing. According to his equations, gravity should cause the Universe to contract until it eventually collapses in on itself in a big crunch. This idea jarred with Einstein, so he introduced a repulsive component of gravity into his equations which exactly balanced the attractive one, giving an elegantly static Universe. The term became known as the cosmological constant. When Edwin Hubble's observations later showed that the Universe wasn't static, or even contracting, but expanding, Einstein described the cosmological constant as the "biggest blunder of his life". 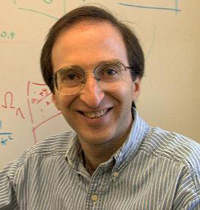 This year's Nobel Prize for Physics has been awarded for a discovery which tops Hubble's in proving Einstein wrong. Not only is the Universe expanding, but the rate at which it's doing so is accelerating. If it continues this way, we are heading for a big freeze at ever-increasing speed. Ironically, the best explanation for this comes from the supposed blunder Einstein introduced to force a balanced Universe: an anti-gravitational force that drives the Universe apart. One half of the Prize went to Saul Perlmutter, Head of the Supernova Cosmology Project and the other went jointly to Brian P. Schmidt and Adam G. Riess for their work at the High-z Supernova Search Team.

It's hard to imagine an expanding Universe. It's tempting to think of it as expanding into something, just as a balloon expands into the space around it when it's being blown up. But if the Universe is all there is, what is it expanding into? One way of visualising an expansion without an edge is to think of a two-dimensional rubber sheet that extends infinitely in all directions. If this sheet was somehow being stretched, then no matter where you stood on it, you'd see everything expanding away from you. 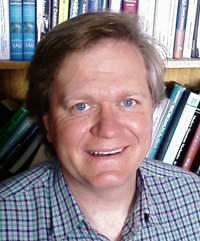 Despite Hubble's discovery of an expanding Universe, many physicists sympathised with Einstein's longing for equilibrium. They hypothesised that the Universe's expansion might be slowing down and eventually come to a halt, so that we'd still end up with a balance, suspended between a big freeze and a big crunch. When the two competing teams, one headed by Perlmutter and the other headed by Riess, began their work, they were expecting to find evidence for such a deceleration. When they saw the opposite they were amazed, but the agreement between the two group's results left little doubt that they were correct.

The teams combed the sky for a special kind of stellar explosion, known as a type Ia supernova. Surprisingly, these supernovae, no matter when and where they occur, always leave behind roughly the same kind of luminous signature — the light curve as it's called — of brightening and then dimming light. They can therefore serve as standard candles: by observing their apparent brightness and comparing it to what you know to be their intrinsic brightness, you can work out how far away they occurred. Knowing the distance and the speed at which light travels, you can then work out how long ago these explosions happened.

The idea seems simple enough, but putting it in practice isn't easy. Type Ia supernovae aren't easy to find and they fade faster than the time it takes to gain access to a large telescope. When you do manage to observe one, you have to account for variations in the characteristic brightness of the supernovae, factor out the effects of background light emitted by galaxies, and the interference of intergallactic dust. Working in competition, the teams overcame these challenges and eventually identified around 50 supernovae whose light revealed that stars and galaxies were rushing away from us at accelerating speed.

The discovery of acceleration revived interest in Einstein's supposed blunder. It seems that after all he wasn't wrong to introduce the cosmological constant into his equations. His mistake was to give it a particular value that would ensure a static Universe. With a different value the cosmological constant offers the simplest explanation for accelerating expansion.

However, it is far from clear exactly what kind of physical phenomenon hides behind the cosmological constant. Scientists have dubbed the mysterious force that drives expansion dark energy and estimate that it makes up around 75% of the Universe. A common view is that dark energy is a vacuum energy, arising from quantum fluctuations which mean that the vacuum isn't actually empty, but full of particles that pop in and out of existence. Unfortunately there's a huge gulf between the amount of dark energy theory predicts there should be and the amount that's between estimated using observations. Thus, dark energy, and with it three quarters of our Universe, remains a mystery. As is the case with most ground-breaking discoveries in science, this one poses more questions than it answers — and opens the way for future Nobel laureates to make their mark.

There's more about expansion, dark energy and the cosmological constant, in the following Plus articles:

There's also an excellent explanation of the Nobel laureates work on the Nobel Prize website.