Outer space: A question of tactics 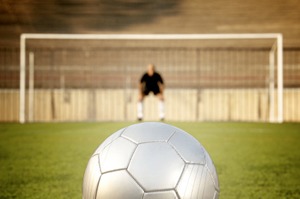 In many sports a particular tactical conundrum arises. The team captain has to choose the best order in which to use a group of players or set-plays in the face of unknown counter choices by the opposition. In what order should you deploy your relay runners on the running track or in the swimming pool? What is the optimum order of play for your golfers in the Ryder Cup tournament? Do you want to field the strongest players first to raise morale or play them last to produce a late run for victory? The same type of choice appears when there is a one-on-one confrontation with different choices of action available. For example, where should you plan to place the ball in each of a series of penalty kicks if your team is in a penalty shootout?

In each case there are factors and counter factors to weigh up about any choice. If I put our fastest runner on the first leg of the 4x400 metres relay and the slowest on the last, will we benefit by having a long clear run in the lead on the inside lane or disadvantaged by being out in front acting as a windbreak and a target for our fastest opponent in the finishing straight? If my strongest golfer ends up playing the weakest opponent that should be a sure win, but a waste of our best player's strength when he or she could have been pitted against a stronger opponent. If our first two penalties went low to the goalie's left, should we place the next one differently? Or maybe the goalie would never expect us to do the same thing for a third time…? Second guessing, third guessing … there seems to be no end to it.

In each case it seems that if you adopt a strategy that your opponents get to know about (or guess) beforehand, then they might employ a better one to increase their chances of winning. If your penalty-taking strategy is to hit your penalties in a sequence that places them left-centre-right-left-centre-right-…etc then inflexible adherence to it could be disastrous if the opposing goalie guessed it — or got tipped-off by his spies beforehand. 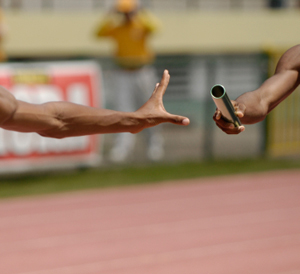 Relay racing: who should go first?

Is there a general strategy whose outcomes can never be second guessed by your opponents even if they know it? In fact, there is. It appeals to a handy operational definition that a random sequence is one for which there is no predictive betting strategy that can beat it. If the machine that generates winning lottery numbers is truly random, then there can be no magic formula, no strategy of lucky numbers, birthdays or scrutiny of past statistics, that can beat it in the long run.

This is the idea we should latch on to in the sports problems we have been listing. If you select where you are going to place your penalty kicks, or order your golfers and freestyle relay swimmers at random, then there is no opposing strategy that can do better in the long run. Even if the opposition knows that you are using a random selection strategy it doesn't help them. They will do best by using a random sequence too, for the same reasons. The goalie should make his choice about staying still or jumping right or left at random to avoid the penalty taker having a superior long-run strategy. Of course, while it doesn't matter if your opponents know you are choosing at random, you mustn't reveal the actual ordering of play that you generated by your random process (for example by tossing a fair coin to place penalties left-right-right-right-left-..): that could obviously be countered. Sometimes randomness is a very useful thing.