Sue was fiddling wth two 10p coins, rolling one of them round the other. Martin came over. "You see these two identical coins?" said Sue. "I am going to keep the one on the right still while I roll the one on the left round it without it slipping or sliding. What do you think will happen to the Queen's head when it gets to the other side?" 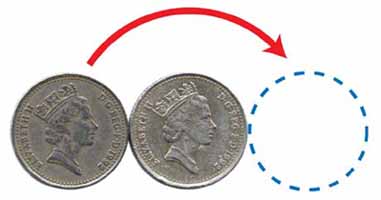 The starting position of the coins

"The head will be upside down, of course!" Martin replied. Sue smiled smugly.

What is the correct answer?

We received quite a few correct answers to this puzzle - and a few incorrect ones too. Readers took a number of different approaches, some more mathematical than others - one reader took the pragmatic approach and tried it out with two real coins!

The correct answer is, of course, that the Queen's head is still right way up. The simplest way to see this is to look at the point of contact between the two coins. Since the coin on the left is moved around the one on the right without slipping or sliding, when the manoeuvre is finished, the contact point on each coin will have moved exactly the same distance on both coins. Since it moves around exactly half the circumference on the stationary coin, it must move around exactly half the circumference on the moving coin too - in other words, the coins end up as in the picture below, and the head must be right way up again. 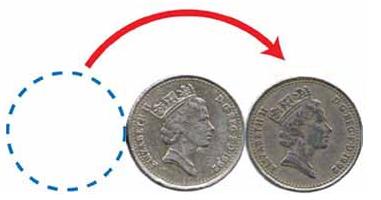 The final position of the coins

Permalink Submitted by Anonymous on April 8, 2012

I've seen this in terms of rolling one coin completely around another...it will rotate TWICE
Reason: one circumference's worth will rotate it once, however this 'path' is not flat and is a circular path (ie the static coin) hence the second rotation