When will they blow?

Sometimes a watched pot does boil, or at least simmer, as scientists monitoring Mount St. Helens have found out. The recent earthquakes, oozing lava, and billowing clouds of steam and ash have been the most intense activity at the heavily monitored mountain in 18 years, and have highlighted the importance of predicting eruptions and understanding what makes volcanoes tick.

Scientists became concerned earlier this month as they monitored an earthquake swarm - hundreds of small magnitude earthquakes - beneath the dome. These became stronger and shallower, indicating magma moving near the surface, and a volcano alert was issued on October 2. There have been several vents of steam and ash clouds thousands of metres high, and magma has oozed out raising the lava dome by several hundred feet. However, in the last week seismic activity has decreased, and the alert level has been lowered as scientists no longer expect a sudden destructive eruption. 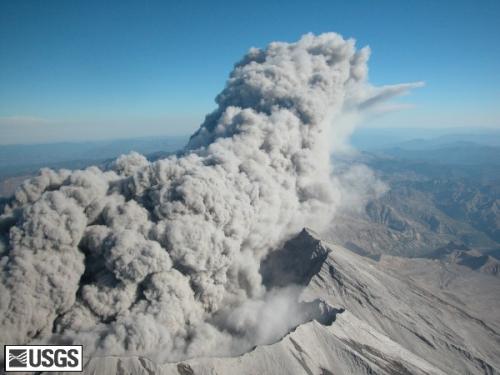 It was common sense to raise the alert levels, said Dave Rothery from the Open University. "It was simply that earthquakes were getting shallower and stronger and more frequent," and shallower earthquakes mean that something is closer to the surface. The good thing about volcanoes is that they build up to a crescendo, unlike earthquakes where you get a big initial quake and smaller aftershocks. "We are in the fortunate position that you get warning with a volcano," he said.

But eruption prediction is still an inexact science, and essentially comes down to spotting patterns in the monitoring data that are similar to those that have led to eruptions in the past - such as more shallow earthquakes and the volcano bulging as magma pushes up. But scientists are trying to get a better idea of exactly what is happening inside volcanoes, in the hope of being able one day to predict eruptions more accurately.

Using data from previous eruptions and from currently active volcanoes, they are working on mathematical models of the processes that occur inside a volcano before, during and after an eruption. These models may involve fluid dynamics, thermodynamics and solid mechanics. Because of the complex nature of the equations involved, these models are often of a simplified system representing a volcano, but these simplified models still yield encouraging results when compared to real life versions. (Read more about fluid dynamics and volcanic eruptions in Going with the flow.)

Stephen Sparks from the Department of Earth Sciences at Bristol University has developed mathematical models of the processes involved as magma moves through a particular type of volcano, and his models produce volcanic features seen in the field. In his article for FirstScience.com, he said that, although it is early days, using mathematical modelling to help interpret the signals that are monitored on volcanoes may make it possible to improve the scientific basis for forecasting eruptions in the future.

Some mathematical models are already being used in situations such as the recent activity at Mount St. Helens. The warnings issued by the survey team included predictions from eruption and weather models as to how the steam and ash clouds produced would disperse and affect the surrounding area.

Over a million people have been killed by volcanoes in the last 3,000 years, with 25,000 killed as recently as 1985 in the Nevado del Ruiz eruption in Columbia. But scientists were able to give enough warning before the 1991 eruption of Mount Pinatubo in the Philippines to save thousands of lives. So, although scientists can't stop an eruption from happening, with current observational techniques and future mathematical models they hope to improve the accuracy of eruption prediction and give enough warning to save lives should the next rumbles from Mount St. Helens, or any other volcano, turn deadly.