Plus Advent Calendar Door #17: From planets to universe

We were lucky enough to attend Stephen Hawking’s 70th birthday symposium in January 2012, and on this 17th day of advent we revisit the brilliant lecture by Astronomer Royal, Martin Rees.

In his lecture Rees said we study the Universe on four levels. First, we must explore what's out there. Astronomy is the grandest environmental science. We want to interpret the phenomena — realising that they manifest conditions far more extreme than can be simulated in the lab. We want, moreover, to understand not just the way things are now, but how the cosmic panorama, of which we're part, emerged from our Universe's hot dense beginning. And what its long-term future is too.

A particularly beautiful section of the lecture was about the birth and death stars. Rees said they form in places like the Eagle Nebula via the contraction of clouds of dusty gas. 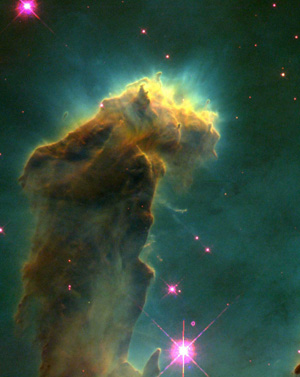 If the cloud has any angular momentum, it will spin faster as it contracts and spin off a dusty disc around the so-called protostar, as shown in the image below. In such a disc dust agglomerates into rocks and planets — this should be a generic process in all protostars. 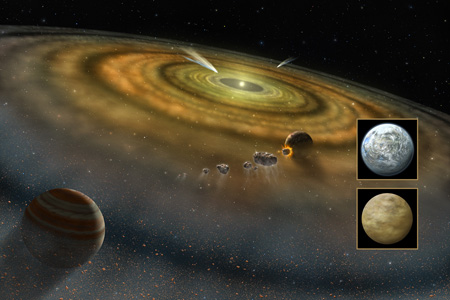 Artist's conception of the dust and gas disk surrounding the star Beta Pictoris. A giant planet may have already formed and terrestrial planets may be forming. The inset panels show two possible outcomes for mature terrestrial planets around Beta Pic. The top one is a water-rich planet similar to the Earth; the bottom one is a carbon-rich planet, with a smoggy, methane-rich atmosphere similar to that of Titan, a moon of Saturn. Image: NASA/FUSE/Lynette Cook 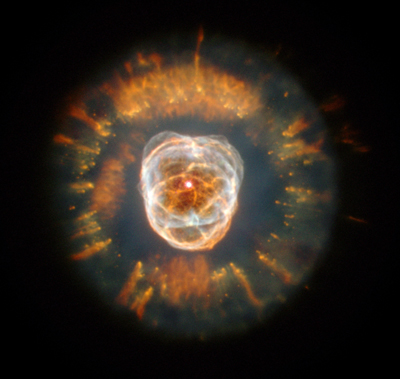 Our galaxy is a huge ecological system where gas is being recycled through successive generation of stars. And it will continue for billions of years.

You can read Rees' lecture in full here.