After Isaac Newton developed his famous laws of motion in the 17th century physicists came to look at the Universe as a giant clockwork. If you knew the exact location, direction and speed of motion of every particle then you should in theory be able to calculate the future evolution of the world precisely. The uncertainties we struggle with are merely a result of our ignorance — in theory everything, including the next lottery draw, should be predictable. 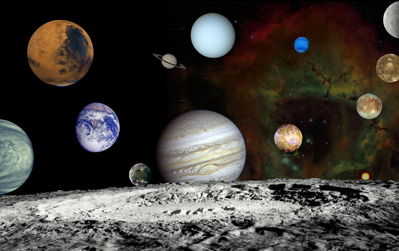 Does the Universe run like a giant clockwork? Image courtesy NASA.

This world view has worrying consequences for things like free will (see the article Freedom and physics), but it's got another problem too: it doesn't really work for two reasons. The first is known as the butterfly effect. In order to calculate the trajectories of 49 lottery balls, you need to know what their positions, and that of the machine, were at the start of the draw. The trouble is that a complicated system like the lottery set-up can suffer from sensitive dependence on initial conditions: get the initial values only slightly wrong and the error will snowball as you chug through the calculations, leaving you with a wrong prediction. The only way of avoiding this effect would be to know the initial values with an infinite degree of accuracy, which is impossible.

The butterfly effect was first glimpsed by the French mathematician Henri Poincaré at the end of the nineteenth century who tried, but failed, to predict the trajectories of three bodies that exert a gravitational pull on each other. In 1961 it was famously confirmed, and named, by the meteorologist Edward Lorenz. He had found that his computer model of the weather generated completely different weather patterns when the initial values were changed by just a tiny amount. The butterfly effect is the main reason why we can't predict the weather, the stock market and all sorts of other complex processes.

The second nail in the coffin of determinism is quantum mechanics. At the end of the nineteenth century physicists realised that certain processes in nature are truly random; they cannot be predicted by any means. An example is the precise time at which a radioactive atom, say a caesium-137 atom, is going to decay. The mathematics of quantum mechanics, the physics of the very small, doesn't give you precise answers. What it does give you, though, is a mathematical object which physicists have interpreted as a probability distribution: it tells you the chance that the atom will decay within a given period. The rule that extracts the probabilities from the mathematical formalism is called the Born rule.

Most physicists are quite happy with this situation. They interpret the probabilities in a frequentist sense. Saying that a caesium-137 has a 50:50 chance of decaying within 30 years means that if you had a large number of atoms, then half of them would decay within 30 years. But philosophers are faced with a problem. The numbers given by quantum mechanics are out there in the world, they can't be interpreted as subjective degrees of belief, and the frequentist interpretation is unsatisfactory as we have already seen. What, then, do these numbers mean and why should we take account of them at all?

Schrödinger devised a famous thought experiment in which a cat in a box is in superposition of two states: dead and alive. Image: Dc987.

Underlying the probability issue is a prediction of quantum mechanics that is baffling to say the least. According to the theory particles can be in several states simultaneously, states that we would normally deem mutually exclusive. For example, electrons can be in several places at once and radioactive atoms can be decayed and non-decayed at the same time. It is only when we make a measurement, to see where a particle is or whether an atom has decayed, that reality somehow collapses and only one of the possible outcomes is observed. We can't predict which one it will be — that's where the "probabilities" given by the mathematical formalism come in. (See this article for more information.)

Just how the collapse mechanism works is entirely unclear. There are various theories (which you can read more about in this article), but no definite answers have been found in the century that quantum mechanics has been around. Without a clear idea of what is actually happening, philosophers are having a hard time coming to grips with what appear to be objective probabilities.

There is, however, one startling result. One interpretation of quantum mechanics says that when a measurement is made, for example to see where an electron is, reality doesn't so much collapse as split. There are now several branches of the world, and in each of them the electron is in one of the possible locations. It turns out that even in this strange branching world, where every outcome that can happen does happen, you can still make sense of what it means to bet on the outcome of a quantum measurement. And it turns out that a rational gambler has no choice but to conform their degrees belief to the numbers given by the Born rule. So if the many worlds interpretation of quantum mechanics is true, these numbers have a meaning. It's a remarkable result, but opinions about its validity, and that of the many worlds interpretation, are sharply divided. You can find out more in the articles Are there parallel Universes? and Playing games in many worlds. It's probably best not to put any money on the true meaning of quantum physics just yet.

Permalink Submitted by Anonymous on December 12, 2013

However, true randomness in quantum events would, agreeably, kill determinism.

Permalink Submitted by Anonymous on December 13, 2013

Copy-edit the last paragraph. Several words seem to have gone to the wrong universe.