Will the virus escape the vaccines?

This raises the worrying possibility that future new variants might entirely escape the vaccines, or turn out significantly more deadly than the wild type. Scientists are investigating this threat, and last month some of them got together at a virtual workshop hosted by the Newton Gateway to Mathematics as part of the RAMP Continuity Network.

While there's still much to learn about SARS-CoV-2 and its biological intricacies, these epidemiologists discussed some general ideas that can throw light on the evolutionary paths the virus might take. And they looked at predictions of mathematical models that can help us explore what to expect and how to shape our vaccine policy accordingly. One point that came across clearly is that quick and equal access to the vaccines for everyone around the world is important, and not just for moral reasons. 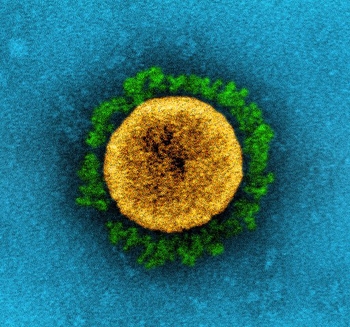 This is a transmission electron micrograph of a SARS-CoV-2 virus particle (B.1.1.7 variant), isolated from a patient sample and cultivated in cell culture. Image courtesy NIAID, CC BY 2.0.

Perhaps the simplest idea in this context is that every infected person comes with a risk of playing host to a mutation. This means that the more infections there still are in the population, the higher the chance that mutations occur, including vaccine resistant ones. In a sense, every infection is a lottery ticket that might win us a jackpot we don't really want.

One way of avoiding the jackpot is to keep the numbers of infections in the population low until as many people as possible have been fully vaccinated. This means that lifting restrictions early, for example once all vulnerable people have been vaccinated, or not bothering with vaccinating young people, comes at a risk.

Such strategies would allow the infection to circulate freely in the unvaccinated part of the population (and to some extent the vaccinated part, because the vaccines are not perfect). There'd be more chances for a vaccine resistant strain to emerge, and such a strain would have an advantage over strains that are affected by the vaccines.

The last thought applies no matter how good the vaccines are and it applies at the level of the population as a whole. To get a more detailed idea of how the virus might mutate, we also need to look at what happens inside an infected person.

Once virus particles have managed to enter a vaccinated person, the person's immune system will mount a response. Ideally, the vaccine will be strong and the response formidable enough to quickly kill the virus particles dead. In that case there's not much room for the particles to replicate and mutate in the process.

On the other end of the scale, with a weak vaccine, the immune pressure on the virus will be small so there's a lot of room for replication and mutation. However, in this case any vaccine resistant mutations don't have much of an advantage over others — the weak immune response doesn't particularly bother any of them — so vaccine escape mutants don't end up outnumbering their vaccine-susceptible cousins.

In between these two scenarios — when the vaccine results in an immune pressure of intermediate strength — there potentially lies a "goldilocks zone" for vaccine escape. In this zone immune pressure is weak enough to allow lots of replication, and therefore mutation, to occur, but strong enough to favour those mutations that are less bothered by the vaccine. These can then multiply more easily and be transmitted to others — a vaccine resistant strain can potentially get out into the population and establish itself there. The plot below illustrates the three scenarios. 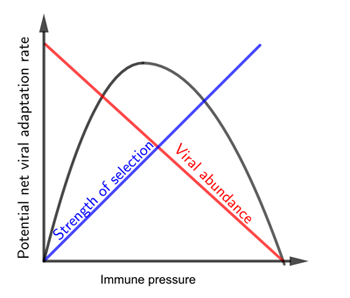 This has implications for vaccine strategy. The approach adopted in the UK is to make sure that as many people as possible get their first jab as quickly as possible, rather than giving as many people has possible both jabs. Since people only have partial immunity after one jab, the period between jabs could potentially land them in the goldilocks zone where vaccine escapes are more likely. So would it have been better to go for a two-jab policy?

It's impossible to give a precise answer to this question at the moment because we don't yet know exactly what level of immunity the SARS-CoV-2 vaccines provide after each jab. What we can do, though, is build mathematical models that can explore the different scenarios that are likely to occur under different assumptions about the vaccines.

This is what Jessica Metcalf of Princeton University, who presented at the Newton Gateway workshop, has done together with colleagues. The work suggests that focussing on the first jab could, as was hoped, have advantages in the short term, even if the level of immunity provided is poor — just because this helps to get the number of infections down. In the longer term, though, it's important to make sure that people do get the second jab at the time interval that's ideal for each particular vaccine. This could mitigate the risk of vaccine escapes.

Metcalf and her colleagues also stress the need for vaccine equity around the world. Vaccines escapes are more likely in countries that can't fully vaccinate a large proportion of their population quickly — and as we have seen over the last few months, new strains are unlikely to stay local.

How sick will we get?

The possibility of vaccine escapes is worrying, but other types of coronavirus give some ground for optimism. For those types, people's natural immunity fades so they can become infected a second time, but the disease tends to be mild. The same might apply to people who become infected despite being vaccinated. Perhaps in a few years' time, when enough people have been vaccinated or have gained some natural immunity through infection, COVID-19 will be no more threatening than a common cold.

The evolution of harmfulness (or harmlessness) is also something we can explore with some basic evolutionary reasoning. With viruses like SARS-CoV-2, harmfulness (also called virulence) might be linked to how transmissible a virus is. When people develop severe symptoms this might be because they carry a lot of virus particles within them, which in turn means they will release lots of particles when they breathe, cough or talk, thus easily infecting others. Being very transmissible obviously gives an evolutionary advantage to a virus, so in this sense being harmful is good for the virus.

But there's also an evolutionary cost to being virulent. If a virus kills its host quickly, or makes them so sick that they stay home and isolate from others, then it's got less of a chance to spread and may eventually die out.

This suggests there's a value of virulence that makes a virus optimally fit for survival: virulent enough to be very transmissible, but not so virulent that the virus dies out.

Virulence may increase with transmission rate (left) and decrease with the amount of time someone has to infect others (middle). The result is a value of virulence that optimises the fitness of the virus to survive (right). Figure: Ian Miller, used by permission.

When a vaccine comes into the picture, this virulence-fitness landscape can change. If the vaccine reduces symptoms (but doesn't block infection), then vaccinated people who are infected may still move about the population, infecting others. Strains that are very harmful to unvaccinated people won't necessarily die out, as they can live happily in the vaccinated part of the population. This line of thought suggests that a vaccine might actually encourage more virulent strains to evolve, and the more people are vaccinated, the stronger this effect.

Luckily there's now good evidence that the vaccines for SARS-CoV-2 do a good job at preventing infection, so there's no significant risk they will drive the evolution of virulent strains. Earlier on in the pandemic, though, the ability of COVID-19 vaccines to block transmission was not clear, and scientists were worried about a mechanism that could potentially kick-start the evolution of virulence.

Metcalf and Ian Miller investigated this possibility in work published late last year, using a mathematical model that takes account of the differences between the two regions of the respiratory tract. The overall outlook from this was positive — all considered, the risk of virulent strains seemed low — but the work also showed that there are hypothetical scenarios in which they could evolve. 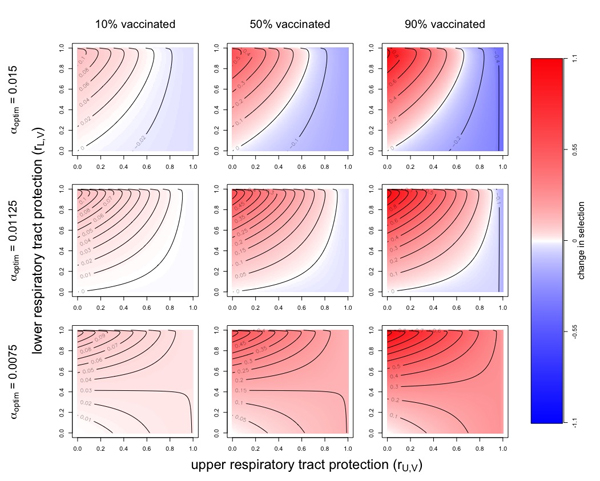 The potential evolution of virulence. Red indicates a situation which selects for more virulent strains and blue a situation which selects against more virulent strains. Darker colours indicate stronger selection. The columns correspond to different proportions of the population vaccinated and the rows to different possible values for the optimal virulence. Figure: Ian Miller, used by permission.

The lesson from this is that, despite the optimism, we'd do well to carefully monitor the virulence of new strains. Those of us who are vaccinated may not be harmed much by them, but those without access to a vaccine may end up paying a heavy price. Again it's middle and low income countries who will bear the burden, so again this stresses the importance of vaccine equity.

All in all, scientists agree, we should continue vaccinating people as quickly and widely as possible. Whatever the risk from vaccine resistant, or more harmful, strains that may evolve, it's outweighed by the benefits of vaccination in terms of reducing suffering and deaths.

What is also clear is that more data is needed, both on the virus and on the vaccines. With a lot of uncertainty still abounding, nobody is claiming to have definite answers. Standard epidemiological models describe the transmission of a disease between people (see this article to find out more), but to get to grips with how the virus might mutate in the future you also need to take into account what is happening within the body of an infected person. Linking in-host models up with population-level models was one of the aims of the Newton Gateway workshop. With more data and more sophisticated models, the future of SARS-CoV-2 will become clearer.

This article was inspired by the Evolutionary Implications of the COVID-19 Vaccination Programme hosted by the Newton Gateway to Mathematics. The Newton Gateway plays a key role in the RAMP Continuity Network to deliver a series of meetings, workshops and virtual study groups that react to key priority areas in the UK's response to the current pandemic. The event was guided by links with groups such as the JUNIPER consortium and the Isaac Newton Institute Infectious Dynamics of Pandemics research programme.

Marianne Freiberger is Editor of Plus. She would like to thank Jessica Metcalf and Ian Miller for their help with this article.