This article, the video and the podcast accompany the Women of Mathematics photo exhibition. You can download Holly Krieger's exhibition poster by clicking here. To see more profiles of female mathematicians and to find out more about the exhibition, see here. Photographs by Henry Kenyon.

Watch the interview with Holly Krieger in this video!

Holly Krieger is a lecturer at the Department of Pure Mathematics and Mathematical Statistics, University of Cambridge, and Fellow and Director of Studies at Murray Edwards College.

Holly Krieger: When I got this job. No, that's not quite true but to an extent it is. This is a difficult career, at least up until the point when you have a permanent position, to know whether or not you're going to be able to go all the way and stay in academia.

But perhaps more of a reasonable answer is there was a professor when I was an undergraduate who I spoke with a lot about the possibility of going to graduate school and what it would be like to be a mathematician and all these things.

One of the most important things that he told me, which no one else ever since has been willing to say, is that mathematics is actually a good career. You can have it as your career and you don't have to be woken in the middle of the night with passion for mathematics, in fact you can be a mathematician and that can be your job and you can be successful even if that's the case.

So that made me a bit more interested because I was never the sort of person who when I was two years old was dreaming of chalkboards. So once I thought that it was reasonable and could accommodate other things in my life as well, that was when I really became interested. 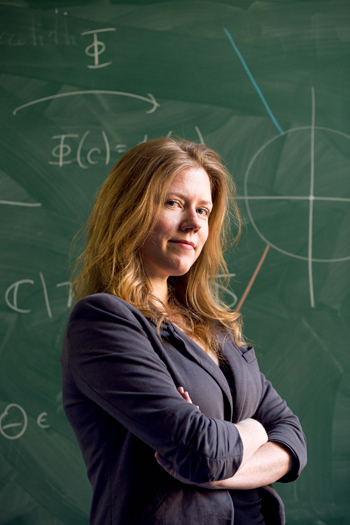 Holly Krieger: I should have some reasonable answer to this. I assume it's sort of like being a female in most other aspects of life. Most people are quite reasonable and treat you normally. A few people treat you poorly, but they treat everyone poorly. Then there are a few others where it's not so clear.

So leaving that aside, of course people will behave in the way that they want to behave and that's not under your control, but the thing that I guess is notable about being a female mathematician is that you are very often the strong minority in a room.

The other side of that is that you can have a very large impact just by being in a room. So if I go to a seminar and me being there means that some post-doc or graduate student is not the only woman in the room, that makes a big difference for her.

So there's sort of this dual aspect of it which is that I feel like I can have a lot of impact on other mathematicians and other potential and future mathematicians, but then of course there are some negative aspects to it as well.

Plus: Is there any advice you would give to a young woman who wants to be a mathematician?

Holly Krieger: The main advice I would give, because this career path is so drawn out in some ways, to get through the undergrad and maybe a Master's and a PhD and all that kind of thing and then post-doc and so on, is that if you want to get through it, all you have to do is not quit.

This is not unique to women, there will be times when you want to give up and you feel like you need to give up and in fact somehow, everyone else is more likely to succeed than you, and all you have to do is work through those times instead of being paralysed by your own concerns.

Holly Krieger: Well, the joys are that it's the joy of learning. That's how I spend a decent portion of at least my research time, learning these fantastically amazing things that other people have done or re-learning in some cases what I have done in the past.

And the fact that most of the conversations I have with my colleagues are so interesting and really, each day has some unexpected aspect to it.

The challenges are mostly the practical matters. I mean, there's not that much time in the day and because you're in this tenuous balance between a job that's not really quite as obviously useful as some other science positions, and you're teaching and all of these things have to be balanced, you don't get to spend as much time doing that learning and doing that communicating as you might like.

Plus: Can you explain your area of mathematics?

Holly Krieger: Yes, of course. I work in dynamics. Dynamics is the study of long-term behaviour of systems.

I think probably the most familiar example to most people is thinking about orbits or the solar system. In school physics you learn that there are rules for how the planets move. Say, just to simplify things, if two gravitational bodies [are at particular positions] at time one and they're [at other positions] at time two, then what happens at time one million?

This is what the question of dynamical systems is asking; if I know how to go from step A to step B then can I, when I repeat that process, say something about the long-term behaviour?

I particularly study places where dynamics is chaotic, meaning that any small change in the starting configuration might lead to unpredictable behaviour in the long-term. (You can read more about the kind of mathematics involved here.)

Holly Krieger: I think probably most of these come from teaching for me. Of course, there's this wonderful thing when you solve a problem and you didn't understand it one moment and then suddenly it was also brilliantly clear to you the next moment, but I think this is the funniest when it relates to teaching.

There have been so many things that I thought I understood when I learned them and then I realised when I was preparing teaching that I didn't actually understand them.

But then of course if you can draw the picture and put it into the context and you really know the proof, then of course you know where which one goes because one has got to be the longest side, right? So the true understanding of the problem sort of takes care of all of the unpleasant notation and memorisation.

So moments like that, when I thought I knew something but really there was something there that was not quite snapped into place in my head, and then I prepare the lecture for it or I discuss it with a student and realise, "Oh, of course. I didn't actually understand this the first time and now I do," — I find that really interesting.

that's a nice little but thoughtful interview. thank you!