50 Visions of Mathematics - celebrating 50 years of the IMA

HRH Princess Anne may claim to not be a "natural mathematician", but she can sure make a mean maths joke. "Forgive me, I am…" she paused in her delivery to a room full of mathematicians, at the 50th anniversary celebrations of the Institute of Mathematics and its Applications (IMA), at the Royal Society this week, "… going off on a tangent."

The IMA is a professional and learned society for mathematicians with over 5000 members including researchers, teachers and people using maths in industry, commercial companies and in government. It started fifty years ago to support the advancement of maths and its applications, by bringing together peole working in maths from all areas and address the shortage of mathematicians in the UK. Some of the founding members of the IMA were present at this week's celebrations, receiving awards to celebrate their fifty years of membership. It must have been particularly gratifying for them to hear that after fifty years, their work has been such a success: Ian Stewart quoted a 2012 report which calculated that 10% of jobs and 16% of Gross Value Added (GVA) to the UK economy (around £208 billon) stems from mathematical sciences research. Stewart went on to say that not only is mathematics and its applications vital to our society today, it will be vital to solving some of the challenges that face us now and in the future. The IMA's work is definitely an ongoing concern.

Alain Goriely uses a magnetic toy to demonstrate self assembly

Maths education is key in order to meet these future challenges, said Celia Hoyles, President of the IMA. Her look back over the last 50 years of maths education was both personal and professional. She emphasised the need to reveal to students, teachers and the general public, the maths that enables our daily lives. "Maths is everywhere, we know that," she said. "But that doesn't mean much to most people. We need to open the black box, just enough."

The other speakers on the day did just this. Alain Goriely, Professor of Mathematical Modelling at the University of Oxford, gave us a glimpse into some of his current research. Although at first it seems he spends a lot of time playing with magnetic toys, it turns out that these allow him and his fellow researchers to explore the mathematics of elasticity and self assembly. (You can read more in his paper.) This magnetic toy is a chance to study how the mathematical properties of the individual magnetic beads, coalesce to create the behaviours seen in the large structures they can build: a physical model of the transition from the mathematically discrete to the continuous. 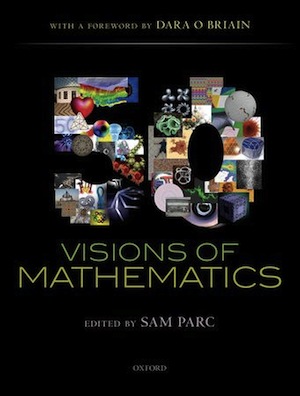 Iain Gray, Chief Executive of the Technology Strategy Board showcased many examples of the role of maths in daily life. Maths from the aerospace industry (where he himself worked for many years) being used to understand role of blood flow in strokes and managing risk in insurance markets; Rwandan coffee farmers using apps that rely on analytic algorithms to analyse satellite data; maths is even responsible for making vacuum cleaners quieter! Clifford Cocks, formerly the Chief Mathematician at GCHQ, and one of the inventors of public key cryptography, received the IMA Gold Medal for his contributions to maths that have had a profound impact on our lives today. Cocks invented what is now known as RSA cryptography (you can read more about this in Safety in numbers) in 1973, but his discovery was classified and his work unheralded until 1997. This form of cryptography underpins our digital economy, keeping credit card information safe whenever you buy something online.

Cocks' discovery is part of number theory, an area of maths that was thought to be useless to the wider world for hundreds of years. It is particularly satisfying that this area now has such a profound impact on our lives — who knows where the next great impact of maths will come from. Ian Stewart, Emeritus Professor of Mathematics at the University of Warwick and author, explained how other mathematical concepts, trigonometry and waves, often taught at school with no link to the real world, are in fact at the forefront of applied mathematics. They are the basis for Fourier analysis — any wave form, no matter how complex, can be built from these mathematically well understood sine and cosine waves. You make use of this mathematics every time you take a picture with your camera and smart phone as it's the basis of jpeg compression in images. 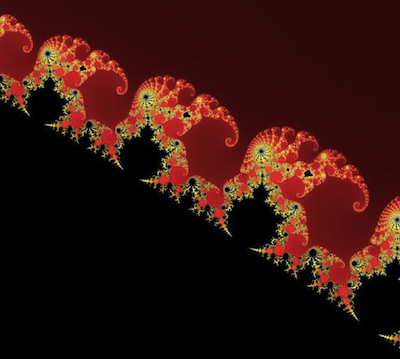 Zooming in on the fractal Mandelbrot set reveals what appears to be a procession of elephants. (Image produced by Philip Dawid, using the program winCIG Chaos Imag Generator developed by Thomas Hvel, University of Cambridge)

The highlight of the night for Plus was when Princess Anne was given a copy of the book 50 Visions of Mathematics. We were part of the editing team for the book, bringing together 50 articles celebrating mathematics from a wide variety of authors, including many of our favourite Plus contributors: Ian Stewart, Julia Gog, John Barrow, Colva Roney-Dougal, Marcus du Sautoy, Simon Singh, and many more.

The book also contains a stunning collection of 50 mathematical images, the result of an international competition that drew entries from mathematicians and enthusiasts. Some of the images are constructed mathematically, such as a number of beautiful fractals, the result of a simple mathematical rule repeatedly applied, which creates shapes that have a complex structure no matter how closely you look at them. Their crinkly outlines look just as crinkly whether your standing back or zooming in for a closer view. (Read more in Unveiling the Mandelbrot set.) 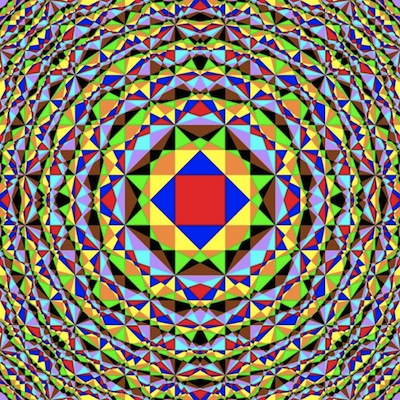 This image shows the Brillouin zones of a square crystal – a mathematical analysis of the crystal's structure that underlies how waves, such as light, move through the crystal. (Created by R. R. Hogan, University of Cambridge.)

Other images convey the power of mathematics to understand the physical world. The striking image on the left shows the structure of a crystal. It doesn't depict its physical structure, however, but a mathematical analysis of this structure to show its Brillouin zones. These allow researchers to understand how waves, such as light or X-rays, will pass through the crystal.

Another image (one of our co-editor, Ahmer Wadee's, favourites) is of a demonstration at Imperial College in 1887 of the mathematically principles of the Forth Bridge. The bridge was the largest spanning bridge in the world at the time and the technique behind it was an innovation, essentially balancing the forces involved using cantilevers. The men on the chairs represent the piers of the bridge and the load on the bridge, in this case Kaichi Watanabe, one of the first Japanese engineers to study in the UK, is supported by the tension (in the men's arms and in the ropes to the anchors) and compression in the structure. 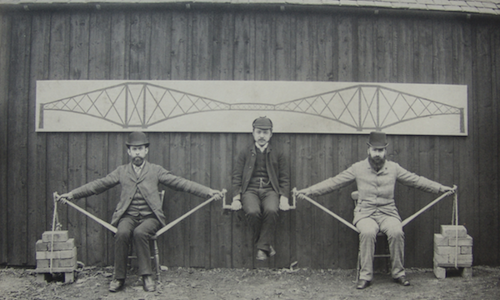 A demonstration of the mathematical principles behind the Forth Bridge. (Photograph courtesy of the Department of Civil and Environmental Engineering, Imperial College London.)

The hope with the book is to allow anyone to have a glimpse of the way mathematicians see the world: old mathematics and current research, mathematical lives and mathematical fun. And for those who don't believe maths is for them, show them the beautiful images at the centre of the book and assure them that if they like these images they are appreciating rich and deep mathematics.

So if you'd like to get involved with the IMA's 50th celebrations, you can get your own copy of 50 Visions of mathematics at the OUP. Or you can come along to the Festival of Mathematics and its Applications in Manchester in July, for more talks, exhibitions and celebrations of the beauty and power of maths. We'll see you there!