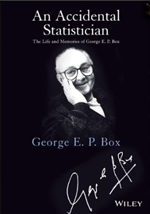 An accidental statistician: The life and memories of George E. P. Box

George Box was without doubt one of the statistical greats of the second half of the twentieth century. Born in Gravesend (Kent, England) in 1919, he became a statistician after World War II. After working as a statistician for Imperial Chemical Industries (ICI), then a very important British company, he moved to an academic career in the USA. In 1960 he founded the Department of Statistics at the University of Wisconsin at Madison.

That department became one of the most important and influential in the world, and Box himself became famous in statistical circles, not least for his influential textbooks. Of these, the best-known are (probably) Time series analysis: Forecasting and control (with Gwylim Jenkins, first published 1970), Bayesian inference for statistical analysis (with George Tiao, first published 1973), and Statistics for experimenters (with Stuart Hunter and Bill Hunter, first published 1978). Statisticians, like me, who were learning their craft when these books came out, grew up with them. They are all still in print, some of them in updated editions.

After his retirement in 1991 Box continued to work in statistics and indeed to produce important advances.

George Box is also well known to statisticians for his pithy sayings about their subject. "Essentially, all models are wrong, but some are useful," is perhaps the best known. Box wrote this in several forms and in many places — this version is from his book Empirical model-building and response surfaces, with Norman Hunter (1987). It expresses a key understanding behind statistical modelling — and it applies to broader aspects of mathematical modelling. It is the statisticians' form of the saying "The map is not the territory"; it warns us that a statistical model is just that, a model, and that we must not forget that the reality we are modelling is sure to differ from the model.

So an autobiographical memoir written by this great man should be a great read, shouldn't it? Well, not necessarily, as An accidental statistician demonstrates. Box began writing this book at an age of over 90, and it was published just before his death, at the age of 93, in 2013. The book, which Box describes as a "light-hearted memoir", might be taken as a Boxian statistical model — it's wrong in several respects, but the important question is whether it is useful.

I do not mean to say that it is "wrong" in the sense of being inaccurate. The issue is that Box, obviously, had to be selective about which aspects of his long and rich life he should cover, and some of his choices do perhaps seem rather strange. There is much detail and anecdote, including the full lyrics to There's no theorem like Bayes' theorem. But Box is not very consistent in how he describes his statistical contributions or his fellow statisticians. Sometimes he gives insight into the statistics, and indeed describes statistical topics at some length, in ways that would be accessible to non-expert readers. In other cases he does not, and what he says would be obscure to newcomers.

He includes some long lists of people who visited or worked in the Wisconsin department, or who contributed to a book of appreciative letters he was given on his 65th birthday. Indeed there is a whole chapter consisting entirely of extracts from these letters, including a six page photographic reproduction of one of them, together with others he received when he retired in 1991. However, while he describes in some detail how he worked with some colleagues and what they achieved, in other cases he gives rather little. The names are familiar to statisticians of my generation, but those younger than me (ie most people) would get no idea from the book about how these individuals fit into the broader picture.

A good example of the way the book includes interesting material, but not what you might have expected to find, is the chapter on "Fisher – father and son". George Box's second wife (of three) was Joan Fisher Box, one of the daughters of the great statistician and geneticist Sir Ronald (R.A.) Fisher. The chapter begins, "I am sometimes asked, 'What was Fisher like?'" But the chapter says rather little on that matter. Box explains that he did not know Sir Ronald well — he married Joan in 1959, they lived in a different continent from Fisher, who died not long after, in 1962. But this does not deter Box from writing the chapter. He had sent a blank audiotape to the geneticist E.B. Ford, after Fisher's death, asking him to record reminiscences of Fisher, and Box transcribes some of this. But much of the chapter is about Harry Fisher, one of Sir Ronald's sons (neither statistician nor geneticist), including long extracts from a letter one of Harry's neighbours sent to Box after Harry's death.

This chapter illustrates how the book as a whole seems to include whatever George Box had kept, from his long life, that seemed interesting to put forward when he came upon it. There isn't an overall clear plan of what should be put in and what not. The book does describe well how Box came, largely by accident, first to industrial statistics and then to academia. It gets across very clearly his view of the essentially applied nature of his subject, and his struggles (not always successful) to keep an appropriate balance between mathematical theory and real-world applications in his Wisconsin department. All the eclectic jumping about between topics can be frustrating, though.

I suspect the book will appeal more to those, like me, who are of the next generation or two after Box, and who were involved in some of the events and movements he describes, than to younger readers. I found Box's model of an autobiography fascinating and enjoyable to read, if not terribly useful. But whether it is useful to you depends on what you want to get out of it. If you want to learn more about the details of a statistical topic that Box worked on, this may not be the book for you. If you want to find out something about how Box worked, and quite a lot about what he thought about statistics, you should read it.

In his later years, George Box toured with Stu Hunter lecturing to industrial groups about the nature of Advanced SPC methods. Luckily I heard those lectures and saw how much George needed to "lecture with math" and how we as engineers needed Stu Hunter to "illuminate with graphic visualizations." George would lecture for a time, then go take a nap while Stu explained graphically and with some humor what George was talking about with all the equations. They tag-teamed us back and forth like that and it worked like a charm. I think his biography needed a co-author, frankly. And helping our industry understand why the basic Shewhart methods no longer worked as well with automated factories was Stu's gift to us. As I remember, one of the Motorola managers refused to pay the bill for their visit as we had signed up without his blessing and not sure if they ever got paid. But we bought lots of their books and even the video series on Box and Hunter DOE methods which are now found on U-tube thanks to Stu Hunter. https://www.youtube.com/playlist?list=PL335F9F2DE78A358B