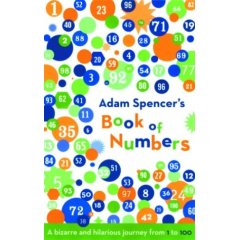 Have you got a favourite number? I have two — 3 and 8 — but I'm afraid my reasons aren't particularly interesting: I am born on the 3rd and 8 is two 3's joined together. But from now on I am going to say that it is because they are both Fibonacci numbers, and if a number is divisible by 3 its digits add up to 3, and that the square of every odd number over 1 is a multiple of 8 plus one. Also that 3 places claim to be home to the world's biggest egg, 3 is the most popular number of members for a girl group, it takes 8 minutes for light to reach the Earth from the Sun, and that a chocolate bar contains, on average, 8 insect legs. There, that sounds a lot more convincing doesn't it!

These facts are thanks to Adam Spencer's Book of Numbers. I think if you were to ask Adam Spencer what his favourite number is and you might have to give him a while to answer. He seems to have a reason to be keen on every number from 1 to 100.

I have to admit to being a little biased in my review of this book. Spencer did a lot to make my love of maths slightly less dorky thanks to his success as a DJ on the youth radio network JJJ in Australia. Spencer, with a honours degree in pure maths and studying for a PhD at the University of Sydney, won the state round of a stand-up comedy competition. When the JJJ breakfast show visited the university, Spencer was challenged to spice up the weather report by saying something "sexy" about the temperature for every city. By a combination of comedy and mathematical facts he did: "Brisbane fine and 19: that's a prime number just near 20... Canberra fine and 22: that's the square root of 484; Adelaide fine and 22: the number of people in a particularly nasty rugby union match where eight people have been sent off...". Adam ended up hosting the JJJ breakfast show for several years, and managed to convey his enthusiasm for maths in between the usual DJ banter in a way that endeared him to mathematicians and non-mathematicians in the audience a like.

This book, like what I remember of Spencer's usual radio chat, is a bizarre mix of mathematics, science, history, and music, movie and general knowledge trivia. I was familiar with some of the maths that appears (Fibonacci numbers, perfect numbers, primes, abundant numbers, the birthday paradox, magic squares, Kaprekar numbers), but there was a lot I had never heard of before (betrothed numbers , untouchable numbers and weird numbers). And for such a short and informal book he doesn't shy from getting down and dirty with the subject. He even gives an overview of Euclid's proof that there are an infinite number of prime numbers, which starts with the phrase "The big guy did it something like this..."

But of course, this book isn't just about maths. It also highlights Spencers love of science, movies, music and a whole lot of strange, strange trivia. We find out that there are 4 proteins in a strand of DNA, hear a lot about the orbits of comets, and that elephants are pregnant for 21 months. Five is the preferred number of members for a boy band, and that Elizabeth Taylor changed costume 65 times in Cleopatra. And he seems to know more about the TV shows Get Smart, South Park and Seinfield than is probably good for him.

Way back in Spencer's first radio appearance in 1996 he said he was studying for a PhD to "gain a greater understanding of complex group theory and to impress chicks". His popularity gave hope to many maths nerds, and you never know you might find a pick-up line or two in this book. If you don't fancy "I see your only having the one drink, did you know 1 is the multiplicative identity?", you could always go with "Did you know that snails only get to have sex once in their lives, but they get to do it for a whole 12 hours..."