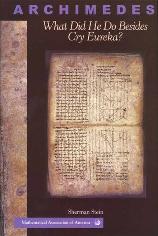 Archimedes: What did he do besides cry eureka?

Sherman Stein's motivation for writing this book grew out of a course on the history of calculus for undergraduates he taught for several years. Before that, like most of us, he didn't know where Archimedes' reputation as one of the greatest mathematicians of all time had come from - and now he wants us to know too.

The book is for the most part an exposition of what Stein feels were Archimedes' most amazing achievements. There is also a short "Life", and plenty of exercises, intended to serve as a "guide and speed bump" for less experienced mathematicians.

In the introduction, Stein says that when approaching each topic, he asked himself "What mathematics lies at the core of this argument, what timeless gem that transcends the quirks and fashions of the times?" He doesn't always use Archimedes' original arguments, some of which depend on mathematics never taught today either in school or university. Where he can, he does, but otherwise he uses high school mathematics. As he says, better a modern proof than none at all. But often he follows Archimedes' original line of reasoning, with modern notation.

The style is more that of a conversation than of a textbook, with plenty of sentences written in "English" rather than "mathematicese". There are plenty of useful diagrams, and the pace is fairly gentle, and developed with frequent explanations of the thinking of the Archimedes' time.

You may have heard that Archimedes was the first person to estimate pi. This he did by considering the ratio of the diameter of a circle to its circumference, and estimating this ratio by inscribing and circumscribing a circle with regular 96-sided polygons. He also found formulae for the surface area and volume of a sphere, of which he was so proud that he wanted them on his gravestone. Here is the result he proved:

Every cylinder whose base is the greatest circle in a sphere and whose height is equal to the diameter of the sphere has a volume equal to 3/2 the volume of the sphere. Its surface, including the bases, is 3/2 the surface of the sphere.

One of Archimedes' strengths as a mathematician was his ability to attack problems in two quite different ways, using both physical and geometric arguments. Often he used mechanics - centres of gravity and levers and so on - to decide what he should try to prove, and then proved it rigorously using geometry.

Of all the works of Archimedes, the one that impressed Stein the most was the development of the theory of the stability of an object floating on water. "In this work, where Archimedes single-handedly initiates the discipline of naval architecture, we see a masterly application of pure mathematics and physical intuition. It is the fruit of much of his geometry and his work on centers of gravity."

Stein says he hopes the reader "will be as amazed as I by how much Archimedes accomplished with the limited tools at his disposal some 22 centuries ago." It is impossible to imagine how we could be otherwise.

Book details:
Archimedes: What did he do besides cry eureka?
Sherman Stein
paperback - 166 pages (1999)
Mathematical Association of America
ISBN: 0883857189