'The art of mathematics' 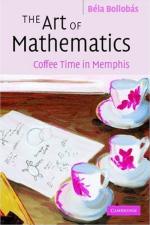 The Art of Mathematics: Coffee time in Memphis

Imagine that on your first day training to be a builder you are given a set of toy blocks with which to build a model house. Deciding that you prefer a profession in which reality is important, you switch to a course to become a bus driver. Here you are given toy cars and a model town and told to play until you work out the highway code. These situations are silly because toy bricks teach you little about real construction, and the toy car game is meaningless because there is no Hand in the Sky controlling all the vehicles on the road.

Yet you have been asked to learn by solving problems from your very first encounters with mathematics. Usually problem after boring problem, designed to implant one technique which can later be effortlessly used in harder problems. If this were the only purpose of solving mathematical problems, then maths would not be special since builders and bus drivers also repeatedly practice the basics of their trades while learning.

What distinguishes mathematics, and is experienced by working with this fine book, is that the life of a professional mathematician not only revolves around problem solving, but also that deep and new mathematics can be uncovered by playing with apparently "toy" problems. In solving such problems, the mathematician learns, revises, and hones key techniques, like other professions, rises to the challenges of friends (and enemies), like in all areas of life, and, unlike in other areas, learns new things about our universe. She will have a lot of fun as well, as will you if you put some effort into engaging with this book.

For this is a book which cannot be read lightly. Split into three sections — The Problems, The Hints, and The Solutions — there is no narrative to take you from page 1 to page 359. You must provide your own by wrestling with the problems. Your attempts to solve them, your failures and hopes, despair and elation, and ultimate success carry you through, and are the themes of the book. A single problem can take weeks to solve, weeks in which you might not even look at the book, nor want to, but in which you will find yourself doodling on envelopes, napkins, windows, fridges, and dogs, until the solution sneaks up on you in the shower and you fall over the curtain trying to scratch the solution into the soap. The next problem, taken perhaps at random from the book, you might solve straight away. This is the joy and pain of problem solving, and contributes to its compulsiveness.

Let us consider the book in more detail. The Problems section lists the problems 1 to 157 which touch on many areas of mathematics and real life. Diagrams are professionally computer-produced and are very clear and attractive. The whole book benefits from the simple but pleasing sketch cartoons by the author's wife, whose artwork also adorns the cover.

The Hints section is the shortest, but perhaps the cleverest, in that the hints sometimes consist of very short questions which appear unrelated to the problem, but which, after much more mental play and strain, reveal a new insight which enables the problem to eventually be solved.

The Solutions section is the one to which some people will turn instinctively and all too quickly. These people can't be called mathematicians for whom the effort required to solve a problem is part of the attraction. That is not to say that sometimes you won't just give up — I know I did — but defeat should only be admitted after a brave struggle. Reading someone else's solution too soon gives you no pleasure, and you are unlikely to learn anything, or remember anything you do learn. Reading the solution after battling the problem for some time will often cause you to laugh at yourself — a valuable skill — or realise that you just didn't have the tools to tackle the problem. Either way you will learn something, and have a good chance of remembering it. But solving the problem yourself and then comparing your solution to someone else's guarantees not only the maximum enjoyment but also the maximum benefit. You are unlikely to forget anything learnt in this way.

And you will learn a lot by reading this book and solving the problems. The author, a renowned mathematician at Trinity College, Cambridge, and the University of Memphis, cautions that reading the book as an introduction to or any kind of systematic treatment of mathematics "may cause indigestion and more damage than good." Nevertheless, learning in the most fun and rewarding way is guaranteed.

The Solutions section is by far the longest, because the solutions are not only given in the dry theorem-proof form beloved of maths textbooks, but are often explained in English as well. Biographical notes of the author and the problem are given, which certainly helps both come alive to the reader. In such notes we also catch a glimpse of the importance that problem solving has played in the history of mathematics; especially highlighted are modern greats such as Paul Erdös, although problem solving has been a driving force for millennia. References for further reading are also provided, ranging from popular science books to scholarly journal articles. Characteristic of this section is the note following the two-and-a-half line proof of problem 9. It begins "This was one of my standard questions for freshmen in Cambridge. I was always sorry that the above elegant (essentially one-line) solution could be given, since it gives the impression that one has to hit upon a 'trick', rather than work a solution out slowly. So whenever my supervisees failed to solve this problem, first I gave a pedestrian solution along the following lines."

If Cambridge undergraduates, and presumably the graduate students who gather in Bollobás's Memphis office for coffee and problems, sometimes fail these problems, how hard are they, or, to ask the same question a different way, who is the book for? Certainly some of the problems are extremely difficult and require a familiarity with graduate-level mathematics to solve. However, since nearly all terms are defined in the statements of the problems, some understanding of the problem itself is accessible to all, and perhaps a few young geniuses may solve them without the usual background study. But many of the problems are approachable and solvable by young teenagers, and perhaps younger people. Such problems include the very first, The Lion and the Christian, which considers a lion and a man in a closed circular arena, both able to run at the same maximum speed, and asks us to determine whether or not the lion can always catch the man. Not all of the more approachable problems come from real life, or death, but may be purely mathematical, including the geometric problem 5: what is the maximal area of a triangle contained in a unit square? And the minimal area of a triangle containing a unit square?

This is a beautiful, challenging and magical book, leading those readers willing to invest time and effort, and risk their egos, on a journey into the profundity, utility, and beauty of mathematics. The problem biographies and the real life problems show that questions at the frontiers of knowledge are not magically provided by a homework-setting authority, but come from an honest, reasoned, evidential, and wry look at the world.