Before the Big Bang

A new theory revealing another universe, whose collapse appears to have given birth to the one we live in today, has just been announced in the online edition of the journal Nature Physics. The research, conducted by Martin Bojowald and colleagues at Penn State University, reveals a contracting universe that existed before the expanding one we live in today, and replaces the Big Bang with a Big Bounce. Bojowald's work also suggests that there will always be some uncertainty concerning the exact properties of the earlier universe. His calculations reveal a "cosmic forgetfulness" resulting from the extreme quantum forces that were at work during the Big Bounce. 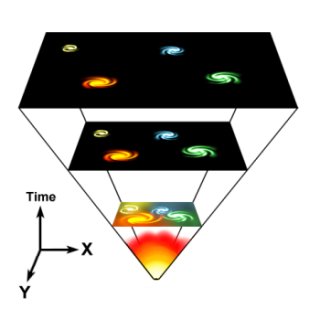 According to the Big Bang model, the universe developed from an extremely dense and hot state. Space itself has been expanding ever since, carrying galaxies (and all other matter) with it.

The Big Bang theory — the idea that our universe erupted into being from an extremely hot and dense state — was developed in the middle of the twentieth century, as a result of observations indicating that our universe is expanding. A theoretical underpinning for the Big Bang theory comes from Einstein's theory of general relativity. His work gives rise to equations describing an expanding universe, and tracing them back in time leads to the Big Bang singularity: a state of zero volume that nevertheless contained infinite density and infinitely large energy.

But while Einstein's theory predicts a Big Bang, it also erects a theoretical barrier. To describe the high energy states of the early universe, you need to include quantum physics, and this is famously at odds with general relativity. In fact, a reconciliation of general relativity and quantum physics is currently the holy grail of theoretical physics. One attempt at a unified theory is what is known as loop quantum gravity and this is exactly what Bojowald and his colleagues used to build a new mathematical model of the universe. "Einstein's theory of general relativity does not include the quantum physics that you must have in order to describe the extremely high energies that dominated our universe during its very early evolution," Bojowald explains, "But we now have loop quantum gravity, a theory that does include the necessary quantum physics."

In contrast to general relativity, loop quantum gravity indicates that the beginning point of the universe we live in had a minimum volume that is not zero and a maximum energy that is not infinite. As a result, the theory's equations continue to produce valid mathematical results past the point of the classical Big Bang. Loop quantum gravity is the first mathematical description to systematically establish the existence of the Big Bounce and to deduce properties of the earlier universe from which our own may have sprung. For scientists the Big Bounce opens a crack in the barrier that was the Big Bang.

Bojowald found that he had to create a new mathematical model to use with loop quantum gravity in order to explore the universe before the Big Bounce with more precision. "A more precise model was needed within loop quantum gravity than the existing numerical methods, which require successive approximations of the solutions and yield results that are not as general and complete as one would like," Bojowald explained. He developed a mathematical model that produces precise analytical solutions by solving a set of mathematical equations.

But while Bojowald's model allows scientists to sneak through the Big Bang barrier, it also predicts that there are some features of the previous universe we will never ever be able to describe. This is not a failing of the mathematical model, but a consequence of quantum physics, which indicates that uncertainty is an inherent feature of the physical world. In Bojowald's case the uncertainty involves the total volume of the universe before and after the Big Bounce. According to his model, these two quantities are complementary: the more you know about the one, the less you'll know about the other. "This is similar to the uncertainty relations in quantum physics, where there is complimentarity between the position of an object and its velocity — if you measure one you cannot simultaneously measure the other," Bojowald explains. "For all practical purposes, the precise uncertainty factor for the volume of the previous universe never will be determined by a procedure of calculating backwards from conditions in our present universe, even with most accurate measurements we ever will be able to make." This discovery implies further limitations to what we can say about the nature of matter in the universe before the Big Bounce.

There is another interesting aspect of the new model: it indicates that at least one of the parameters describing the previous universe does not survive its trip through the Big Bounce — so successive universes are unlikely to be perfect replicas of each other. "The eternal recurrence of absolutely identical universes would seem to be prevented by the apparent existence of an intrinsic cosmic forgetfulness."