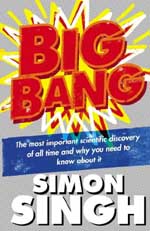 Big Bang: The Most Important Scientific Discovery of All Time and Why You Need to Know About It

At the earliest age, children around the world ask questions about the nature of existence and how we came to be here. Simon Singh's third and most ambitious work of popular science takes us on a journey through the ages, as man's sense of his own importance in the universe shrank ever smaller and his idea of time stretched from a few thousand to around fifteen billion years.

Big Bang is an inquiry into the nature of science itself — how better experimentation, observation and insight drive out old ways of thinking. Cosmology, like quantum physics, often runs counter to common sense. It is a branch of science on the frontier of our ability to comprehend and measure, therefore it takes thinkers and observers of genius to advance the sum total of our knowledge. From the earliest Greek philosophers, whose attempts to measure the distance from the earth to the sun met with an amazing degree of accuracy, to the measurement of the cosmic background radiation which provided the signature of the Big Bang — this is that story.

All the best science populists have unerring eyes for the punchy anecdotes that propel the narrative forward and Singh is no exception. In the BBC documentary and subsequent book which brought him to public attention, Fermat's Last Theorem, he first showcased his ability to capture a character or scene, especially when discussing the duelling death of the mathematician Evariste Galois at the tender age of 20. His sophomore effort, The Code Book, included a riveting description of the uncovering of the Babington plot by Queen Elizabeth's cryptologists that ultimately sent Mary Queen of Scots to the executioner's block.

Big Bang is a worthy successor. With such a large cast list of protagonists in the story of the Big Bang, Singh has to illuminate their characters in just a few deft strokes of his pen. He succeeds admirably, particularly when describing the rivalries and jealousies that often accompany competing scientific theories. Cosmology is littered with these - Galileo v The Vatican, Romer v Cassini, Shapley v Curtis and Hoyle v everyone to name but a few.

Arguably the most intriguing clash of personalities in the great Big Bang debate pitched the arch-rebel Albert Einstein against the Belgian priest Georges Lemaitre. In an ironic twist on the Galilean incident three hundred years previously, Singh tells us how Einstein had turned into the dismissive establishment figure ("Your calculations are correct, but your physics is abominable") while it fell to Lemaitre to give the first detailed description of the Big Bang model. Einstein was eventually moved to look back on this episode and admit "To punish me for my contempt for authority, Fate made me an authority myself".

Simon Singh is no mere storyteller, however. He can distil a complex concept into an easily digestible form without losing its essential meaning. His descriptions and diagrams of Ptolemaic epicycles and Einstein's Special Theory of Relativity are perfect examples of how clarity and concision in science texts can help readers understand an idea.

Apart from a brief discussion of Newton's law of gravity, Singh has explicitly eschewed equations in favour of a broad overview of the development of the Big Bang model. Ambitious readers looking for a much meatier mathematical framework of our physical universe might care to try Roger Penrose's magnum opus The Road to Reality. As a potted history of how we arrived at our present understanding of the cosmos, however, Big Bang seems unsurpassable. One finishes this marvellous book with the satisfied sense of knowing just that little bit more than when we started.

Book details:
Big Bang: The Most Important Scientific Discovery of All Time and Why You Need to Know About It
Simon Singh
Paperback - 544 pages (2005)
HarperPerennial
ISBN: 0007152523

Keith Bowman is an IT professional and freelance writer.