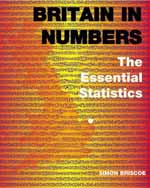 Britain in numbers: The essential statistics

The author of this book is Statistics Editor of the Financial Times, the only newspaper in Britain to employ someone with this job title. He is therefore uniquely well placed to write this fascinating and timely book, which sets out to provide a fact-based picture of the society we live in.

Unlike many other books that purport to hold a mirror up to society, this one puts the data first, rather than being driven by ideology or theory, and the result is a powerful and informative testament to the state of modern-day Britain.

The back cover claims that Britain in numbers is "essential reading for anyone who wants to be impartially informed about the British political and social landscape". This makes it sound as if you would have to be a policy wonk to bother with the book, but, with statistics routinely used for partisan media reportage and as ammunition by all sides in political debate, it is more important than ever for the informed citizen to be statistically knowledgeable.

Around 25% of the GCSE maths syllabus is now in the area of "data handling", and teachers of other subjects such as geography and biology are expected to teach and use some statistical methods. I would heartily recommend this book to any teacher looking for lively, genuine and up to date examples of data analysis, or for projects to suggest to students.

For example, this reviewer was intrigued by an example from the late 1990s on youth unemployment figures (p 132). It is often pointed out, including by a government anxious to trumpet its policy successes, that youth unemployment is much higher in, say, France, than it is in the UK. This is true, but Briscoe explains that the effect is largely an illusion. Unemployment rates are calculated as a proportion of those "available for work", which does not include those in education - and education participation rates are far higher in France than the UK. When youth unemployment is expressed as a proportion of the entire population in that age group, the difference largely disappears. I followed up the reference given, and was kindly supplied with recent figures by the source quoted in the book, Monica Threlfall of Loughborough University.

As Briscoe says, having so many young people in education is arguably a policy success for France, and a success the UK government is anxious to emulate, with a target of getting 50% (up from the current 40%) of young people into third level education by 2009. Would it be so keen to promote increasing participation if it realised the result would almost certainly be a large rise in the youth unemployment rate? Discuss.