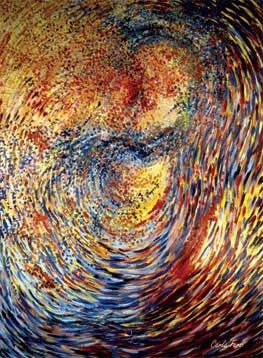 The birth of Hiroshima, Carla Farsi, from the Plus article Art+Math=X.

If you're an artist who's inspired by maths and science, here's a chance to exhibit your work. Through its annual open exhibition opportunities, Orleans House Gallery in London helps artists both locally and nationally to showcase their work in group exhibitions. Each year, over 500 individual artists exhibit work in a range of open exhibitions across three galleries in London: Orleans and Stables Galleries, Twickenham and the Riverside Gallery in Richmond.

In 2010, there are further opportunities for you to submit artwork for an exhibition at Riverside Gallery, Picturing Science. Scientists use an abstract language of signs to visualise and explain the invisible forces, relationships and processes which make up our world. Artists similarly create images to transmit and analyse meaning. The theme of this exhibition is the collision, intersection and contamination of these two systems of representation. Any media (prints, photos, paintings, objects, sculptures, film) and style are considered.

The submission deadline is the 23rd of October and the exhibition will run from December to February. For more information visit the Picturing Science website.

Curator Mark De Novellis stated: “Although science is seemingly the logical, rational, ordered antithesis of artistic creativity, artists and scientists still share a common drive to innovate, explore, dissect and reveal. They have a unified love and awe for the world around and within them.

Exhibiting artists draw from a wide variety of scientific disciplines from botany, astronomy to astrophysics to create an accessible, compelling and though-provoking show that is not to be missed!”
The exhibition runs until 26 February 2011 and admission to the Riverside Gallery is free.