Jon Walthoe is an Editor of maths books at Cambridge University Press. The Plus team asked Jon about how he got here and just what an editor actually does.

Jon didn't always have plans to work in mathematics. In fact, during his early years at school at Beauchamp Community College in Leicester he was fairly indifferent to mathematics. "I did an A level in Further Maths only on the basis that they had encouraged me to, and I could do three other A levels as well", he said. Like many people at that age, he was having trouble deciding what he wanted to do. "I hate to say it, but I was just like everyone else. I didn't know. I had no idea. I'd decided that I was going to go to university, but I hadn't decided what course.

"This is one of the problems with our system. When you finish your GCSEs you are asked to make a big decision, because you can only take 3 or 4 A Levels and that really cuts down what you can do. And when you take a degree in the UK it is in only one subject (though you can do joint degrees now). For instance I stopped learning languages at 16, which I think is really bad. You are asked to make decision when realistically you don't know."

Before his A levels, Jon had decided that he wanted to go to university and was considering a range of subjects: Physics, Chemistry, Economics and Archaeology as well as Maths. Looking back, Jon feels he made the right decision, partly because "Maths really helps you get a job".

An inspiring teacher at A Level led Jon to consider studying Mathematics. "He changed the subject from being another set of stuff you had to learn to pass an exam to being something really, really interesting ... basically he kind of brought it all alive," he said. In the end, Jon chose to apply only for Maths courses, and he completed a BSc in Mathematics at Exeter University in 1996. Before going on to do a D.Phil. (which is "the same as a Ph.D. - depending on where you are they name things differently") he took a year out, initially working to earn some money and then travelling in North and South America for six months. Jon was definitely bitten by the travel bug: "I thought, 'I'm going to go away and get it out of my system', and then of course it just makes it worse. So I travel when possible, I really like it."

Starting his D.Phil. at Sussex University, Jon discovered what doing mathematics, particularly pure mathematics, was really like. "Basically I read books, I read journal articles, and I went to see my supervisor once or twice a week," he said. "I used a computer for typesetting stuff, otherwise you are just there with a pencil and paper trying to do it." Studying mathematics did not always seem as glamorous as other subjects: "It was quite frustrating sometimes because all my friends were in physics or chemistry and they got to play with these amazing toys and labs and all I had was pencils!" 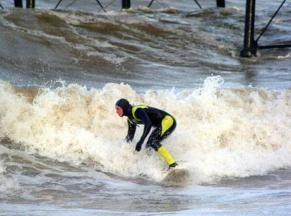 Jon enjoyed his postgraduate studies, and finished his thesis entitled "Absolute continuity in two dimensional periodic elliptic boundary-value problems" (phew!) at the end of 2000. While at University, Jon also enjoyed surfing and windsurfing. "The south coast round Brighton is great for windsurfing, it's fantastic. And down in the south west there is decent surf. I mean it's not like Australia or California or whatever but it's nice. A bit colder!", he said. "We used to go walking as well, on Dartmoor. I used to go biking, and again living in Brighton the South Downs are just on the door step and that's great for going mountain biking. And also being a student I did like to go to the pub and that kind of stuff." He now manages to combine two of his pasttimes, surfing and travelling, when holidaying in places like Portugal.

While at university, Jon got involved with several projects working with school students: "I took part in this thing which is run by EPSRC (the Science Council), called the Pupil Researcher Initiative. That involved turning up and helping with the running of conferences for school kids. It was really good fun actually. There were a couple of conferences at the Royal Institution in London, and the kids would have to do a Poster, kind of a display on science. It was our job to help them along with it, and then people would come round and judge ... So that was really good fun."

As part of another project, with the Education Action Zone (EAZ) in Brighton and Hove, Jon took some classes in a school - something he describes as "a uniquely terrifying experience!" The classes were for students of a range of ages from 10 to 15 and "some of them were pretty tough kids".

For the project, the EAZ had organised a series of talks and lessons to illustrate that maths is interesting and useful. Jon's aim was to show the interesting side of mathematics by teaching "lessons that weren't the stuff that they did day in, day out". For example, one class was on fractals. Using a computer program he wrote, the students could experiment with the effects of changing the parameters on the images produced. Jon explained: "My job was to try to do the interesting side of it. But it was also to talk about going to university, because for a lot of those kids it wasn't in their sphere of experience, people going to university. So the idea was to point out that you can do it and it's a positive experience."

As well as Jon's lessons, people from a range of businesses (computing to aviation to social work) came to talk to the students about why they needed their maths qualification. "People don't appreciate that it is a really useful thing and if you pass your maths qualification you get a better job and you get more money," Jon said. "It was a really good project."

Meanwhile, as Jon was nearing the end of his D.Phil., his funding began to run out and he realised that he needed to get a job. He applied for a job at Cambridge University Press, advertised in the Careers Service at Sussex University. "The ad was for Editorial Trainees. I got offered the job, and there was a period of time when I was doing both the job and my D.Phil. I'd work the day here [at CUP] and then go back and start writing again in the evenings. I am no longer a trainee, thankfully! It's not as much fun and it's not as much money!"

Jon now works as an editor of Maths books at Cambridge University Press. There is a lot more to his role as editor than most people realise. "There's two sides. There's the day to day making sure that all the processes that go towards publishing books work alright. So you have to talk to people in production, marketing, sales and you have to talk to the author and basically mediate between them. So that when the book is published, it's at the right price, it's being sold to the right markets, it's come out on time, the production cost were low enough so that we can make a margin. So just kind of day to day management.

"And the other side, which is the interesting bit, is developing 'the list', which is basically getting new books. So what I am paid to do is go out and meet authors, potential authors and even not-potential-authors and talk to them about what they do, whether they'd like to write a book about it, what books need to be written, who should do it, what they think of our publishing, etc."

But how does he find new mathematics books? Jon explained: "It's reasonably well known which are good maths departments, and it's reasonably well known the strengths of different maths departments, if you have a background in it." An important aid to finding new books is attending conferences, where he meets people in the field and "finds out exactly who is doing what research, who is good at it, what's the hot topic now" he said. "[You find new books] just by meeting people and asking them questions and finding out. And luck as well!" 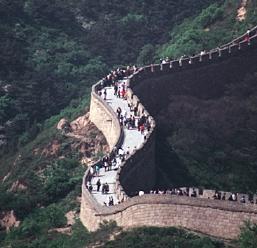 Part of the attraction of the job for Jon is the opportunity for travel: "The job involves a lot of travel, which is one of those things which I like. Some parts of it are more glamorous than others. I was in Birmingham last Friday. Next week I am going to Warwick on Monday and Exeter on Tuesday. Then I am going for a week up to Scotland - Edinburgh, St Andrews and Glasgow. So we do lots of UK visiting, but also you get to go to conferences. I was in Berlin earlier this year, and I was in Liège as well. Next year it starts to get a bit nicer. I can go to Pisa and Beijing: the big meeting next year is in Beijing, which I am looking forward to. It should be a great place to go. I'll book a week or two's holiday on the end and go and see some walls!"

While poring over document proofs is the first thing that may come to mind when thinking of editors, Jon's work does not involve any copy editing. When describing copy editing, Jon says "It's just a really, really hard job." Copy editors read a manuscript through in great detail, "and if it's a maths book, that's really hard to do," Jon said. "And they mark on corrections, which isn't half as much fun."

Although it's not possible to know and understand all the mathematics that is covered by the books he works with, it is important that Jon can discuss the proposed books with the authors and his collegues at CUP. "In general, if an academic sits you down and tries to tell you in detail what they do, you don't stand a chance. But I know the difference between group theory and combinatorics and analysis and whatever so I have some comprehension of what the areas are, I know the words," Jon said. "I don't know too much about very pure maths, for instance number theory or group theory, but if I am talking to somebody only about the level of their book proposal I can get an idea what it is." Referees are employed by CUP to judge the quality of the manuscripts they receive. Unlike the editors, the referees are experts in the particular area of mathematics covered by the book.

Jon says that in his job, he finds communication skills are more important than knowing the mathematics in fine detail. "I think being a Maths editor knowing nothing about mathematics would be very hard. But I don't think you need a Ph.D. to do it. As long as you can talk to people, you can get on with people, then I think that is more important."

Jon doesn't think it is rare for someone to have both mathematical and communication skills. "I think mathematicians have a bad reputation," he siad. "The stereotype doesn't come from nowhere, but that's what it is, it's a stereotype. In general, mathematicians are just like everyone else, they're no different."

Jon wrote two articles for Plus for Issue 9