Helen works as a Research Scientist at the Meteorological Office and spoke to us about her career there as well as her study experiences and interests. 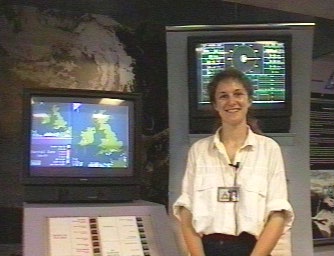 Life at the Met. Office

Helen joined the Met. Office in September 1996 and really enjoys it. "The working environment here is very good. People are always willing to give you time and answer questions. I felt I was welcome and fitting in right from the beginning."

Helen says: "I do a lot of analytical maths, using things like differential equations, fluid dynamics and the Navier Stokes equations". Once she has a mathematical model she uses numerical analysis and computer modelling techniques to solve the equations to produce results.

At present she is researching the airflow over mountains. "The air comes towards a mountain and it's either got to go over the mountain or round the sides, there are various factors that decide which it does. If it goes over the mountain you can get waves downstream and things like the föhn effect and down-slope windstorms. The bit I am looking at the moment is called rotors where you get a closed circulation in the lee of the mountain that can bring down aeroplanes because of a very sharp down current. The aim is to tell aircraft pilots if it's windy in a particular way over specific mountains then you may get effects which are dangerous and you have to avoid them, but if it's windy in another way then you should be able to fly over them".

Training courses are currently also a large part of her work. "I go to a lot of seminars, for general meteorology. I've also been on a very good in-house training course for four months which covered everything you need to know about the weather".

Looking to the future, Helen says "I am going to the Geophysical and Environmental Fluid Dynamics Summer School at the University of Cambridge in September for 2 weeks. Then in January 1998 I am going to be at Reading University doing the second term of the MSc lecture courses. The training course that I've already done here at the Met. Office counts as the first term of the MSc course. Then if I do the dissertation I get an MSc, otherwise it will be a Post-grad Diploma. Another possibility might be to carry on to do a PhD".

There are opportunities to travel abroad to conferences and she also says there are a lot of social activities at the Met. Office, at present she is in the Croquet Club.

Life before the Met. Office

Helen did her GCSEs at The Arnewood School in New Milton, Hants and her A-levels (Maths, Further Maths, French and Chemistry) at Brockenhurst Tertiary College, Hants. She then went on to do a Combined Honours BSc Degree in Maths and French at the University of Exeter. She graduated from there in the Summer of 1996, having spent a year in France at Rennesas part of the 4 year course.

Had she always wanted to study maths? "Basically I carried on with maths because I enjoyed it and also because my Dad, who did Maths and Sciences, always helped with homework. I was also lucky that I had good teachers."

Helen liked both her school and her Sixth Form College and found College was a good way of preparing for life at University. She found doing Maths and Further Maths A-Levels did not "really feel like you were doing 2 A-Levels because they were coordinated together, we had 8 hours a week instead of 5 for each A-Level. I did S-Levels as well in Maths and Further Maths so certainly the first term or two at University were a lot easier for me than they were for people who hadn't done Further Maths." 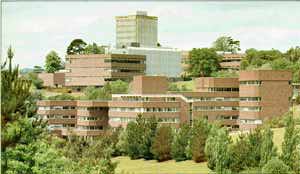 "In the end I decided Exeter was the one I liked best. They have a very good system in Maths where you get to choose your courses and in the second and final years you choose levels as well, you can do the same course, but at two different levels. It is all geared for students of different abilities."

Helen enjoyed the independence that university life brought. "Leaving home is a bit of a jump and takes getting used to but it is good because you are part of a big community. Being in a hall of residence in the first year is great because you instantly meet lots of people. Studywise it is very different because you are not monitored. You have got to be disciplined and do it yourself".

"I literally did not have a clue what I wanted to do when I started looking at careers, PhDs or what to do next, but I was interested in carrying on with Fluid Dynamics. In the second year the Careers Service made you start thinking and I did but still didn't have any ideas. In September of my final year I went back to them and started trying to think seriously about what I was going to do. The Met. Office was one of the places that said something like "if you have Maths or Physics that's good and we are interested, we have all sorts of jobs". I applied around Christmas in my final year, had interviews in February and April and actually got this job in June just after my results."

"I play the cello in an orchestra and have done since I was about 9. I have been in a school one, then a college one, then a university one and now I'm in Farnborough Symphony Orchestra. I really enjoy it."

"I've played croquet in the back garden at home since I was tiny and am now in the croquet club here. The Met. Office has an internal web and as well as pages about all the different divisions it's got a bit for the Sports and Social Association, so some of the clubs have a home page on there. You can go and look through what there is available and what you want to join. There is a newsletter that comes around as well. So there's lots you can do here outside work."

If you would like to find out more about having a career in the Met. Office please contact:
The Recruitment Manager
Personnel Management
Meteorological Office
London Road
Bracknell
Berkshire RG12 2SZ