There is good news for the jaguars living in the dry tropical forests and plains of Kaa-Iya National Park in Bolivia - researchers now believe the park contains the largest population of jaguars living in a protected area in the world. Using statistical techniques, researchers have estimated that 1,000 jaguars roam there, and that with conservation efforts the population will continue to prosper. 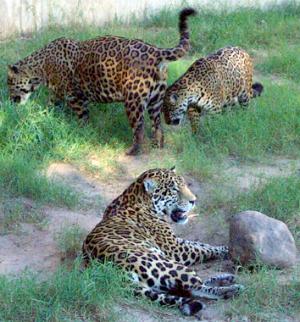 It is important to know the size of populations of animals, such as jaguars, in order to plan conservation strategies and monitor the status of the population. But jaguars, like many large cats, can be tricky to spot due to their behaviour and the environment they live in. Simply doing a head count of all the jaguars in an area is usually impossible, particularly one as large as the 34,400 km2 Kaa-Iya National Park. Instead, field researchers use a method where a network of "traps" are monitored for how often individual animals are caught, and statistical analysis of this capture-recapture data gives an estimate of the total number of animals in the area.

Andrew Noss from the Wildlife Conservation Society, Leonardo Maffei and Erika Cuéllar, representatives from the indigenous group that helped create and manage Kaa-Iya, and their field team used cameras to "trap" jaguars - a technique developed for monitoring tigers in India. The camera traps consisted of pairs of cameras placed on opposite sides of a trail, that were triggered by the movement or heat of an animal passing between them. By photographing both sides of the animal, individual jaguars could be identified by the unique spot patterns on their coats and recorded as having been caught by that trap.

Data was gathered from camera traps in a series of surveys over three sites in the park, and analysed using a computer program called CAPTURE. The program builds a statistical model of the process of catching the jaguars which depends on the probability of each jaguar being caught in a trap and the size of the population. In many other applications, models are used to estimate the probability of an event, say recording a certain set of data, given the known parameters of the model. In this situation the reverse happens. CAPTURE estimates the parameters of the model, including the jaguar population size and density, in a way that maximises the likelihood of observing the data recorded in the survey - called the Maximum Likelihood method. (You can read more in the Maximum Likelihood Estimation Primer from Kings College London).

In a paper published in a recent issue of the Journal of Zoology, the researchers estimated that there are around 1,000 jaguars in Kaa-Iya National Park. This number is a pleasant surprise, as it would make Kaa-Iya's jaguars the largest population in a protected area, and big enough to sustain itself and avoid inbreeding in the current environment. This is great news, but the researchers emphasise that there is continuing work to do in maintaining the population, by conserving the area and looking after the wider population of jaguars that stray outside of the National Park. But, at least according to the numbers, the future of the Kaa-Iya jaguars looks bright.