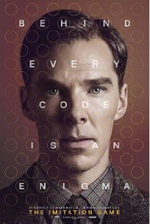 Over the last few years the name of Alan Turing, mathematician and WWII code breaker, has emerged from relative obscurity. A major campaign, sparked by the occasion of his 100th birthday, resulted in a posthumous pardon for his conviction for "gross indecency", and there was a burst of cultural activities celebrating his legacy, both as a tragic hero and the father of modern computer science. Despite this, Turing still isn't the household name he deserves to be. Which is why it's great to see a major new film about him: The imitation game, directed by Morten Tyldum and starring Benedict Cumberbatch and Keira Knightley.

It would be hard for any film telling Turing's story not to be gripping, and The imitation game is. I won't give the story away here in case you don't know it, but I cried several times, laughed a few times, and my heart jumped in excitement every time maths came on the scene, portrayed not only as a major tool in winning the war, but also as a deliciously obsessive source of pleasure for those who do it. If you are not familiar with Turing's life and work, I'd definitely recommend this film.

There are some great performances too. Alex Lawther is brilliant as the young Turing, I loved Charles Dance's portrayal of the beautifully nasty Commander Denniston, and Mark Strong as the suave and menacing MI6 chief Stewart Menzies. And Cumberbatch, playing Alan Turing, shines as you'd expect.

But it's in Turing's portrayal that my misgivings about this film start. Turing was an unusual personality no doubt; an introvert and brilliant mathematician, with a troubled childhood. The well-worn cliché of the emotionally deficient genius immediately springs to mind, with a hint of Frankenstein thrown in, on account of Turing's obsession with his code breaking machine. And the film falls for it gloriously. Turing's character is entirely defined by his inability to connect to others and obsession with his work; and rarely rises above those two dimensions. The jokes constructed from this character make-up soon become predictable, and the film's engagement with relationship dynamics is of dubious depth. Generally the film rarely pierces the surface of characters or ideas, which has the pleasant side effect of not taxing your brain too much.

Historical accuracy is an issue throughout. I'm the kind of person who immediately forgets most historical information they learn, but some things surprised even me. I'd never heard of Turing naming his machine after his childhood friend Christopher (in reality it was called The Bombe). The part of the film that surrounds Turing's arrest in 1951 (in reality it was in 1952) struck me as almost absurd: a strange plot device (the film's story is told through Turing's police interview), that includes some desperate nods towards deeper issues surrounding Turing's work (machine intelligence). And a Soviet spy a member of Turing's immediate code breaking team, blackmailing him into silence on account of his homosexuality? Back home and empowered by Google I checked, and found that those things, as well as others, are apparently made up. Artistic license, perhaps, but as Alex von Tunzelmann wrote in the Guardian, the suggestion that Turing was in the clutches of a spy seems a cruel twist to add to the story.

But perhaps all this isn't surprising. Turing's story combines a whole bunch of difficult issues: a complex, introverted character, very complex mathematics, the morality of war and national security, the persecution of gay people, and Turing's mysterious death that has never quite been cleared up (in the film it's portrayed as suicide). When we interviewed David Byrne, the director of a musical about Turing, last year, he said that Turing's character was so complex, the only medium to really bring the emotional issues across was music. If you want to tell the full story in traditional film in a way that appeals to many people, some superficiality is perhaps inevitable.

Once I had decided to settle for that compromise, I really enjoyed the film. It's still a fascinating story and nice to look at, it's definitely entertaining, and broadly educational. If its broad appeal means that more people become familiar with Turing's life and work, and with the beauty and power of maths, then the film was worth making.

You can read more about Turing's life and work on Plus.

Marianne Freiberger is Editor of Plus

Quite right - as a drama the

Permalink Submitted by Anonymous on November 24, 2014

Quite right - as a drama the film works very well, as a documentary (which it is not intended to be) it would fail. There was a spy at Bletchley passing information to the Soviets (who were, of course, our allies at the time) - but he was in a completely separate hut from Turing and it's unlikely that they ever met. Information gained by breaking Enigma often couldn't be acted upon directly, because to do so would immediately have revealed that Enigma could be broken - but I don't think Turing played any part in deciding how to use the information, he would probably have been one of the worst possible candidates to make such decisions.

Permalink Submitted by Anonymous on January 31, 2015

During production, there was criticism regarding the film's purported downplaying of Alan Turing's homosexuality, particularly condemning the portrayal of his relationship with close friend and one-time fiancée Joan Clarke.