You can listen to a longer version of this interview in our podcast.

Throwing our usual cursory glance at Twitter the other week we got stopped in our tracks. "Off to see Alan Turing musical," said a tweet. A musical? About Alan Turing, the tragic mathematician and WWII code breaker who was convicted on account of his homosexuality in the 1950s, chemically castrated as a result, died young in mysterious circumstances and still hasn't received all the recognition he deserves? Isn't that in slightly poor taste? So we clicked on the link, booked the tickets and went off to the New Diorama Theatre in London to see The Universal Machine.

And we loved the show (you can read a review here). So much that we asked for an interview with writer and director David Byrne, Richard Delaney, who plays Turing, and Assistant Director Natalie York. The first question we asked was, "why a musical"?

Turing was an introverted man, Byrne points out, who had severe difficulties connecting with those around him. "It seemed logical to find a language in which people could physically move and were able to emotionally express themselves," he says. "Song and dance seemed perfectly right for that. Not traditional song and dance like in A chorus line but using movement and music in a choreographed way that would act like salt on the story and really bring it out in a theatrical way. We really fought against [the musical idea] for ages but we couldn't find anything that quite fitted in as nicely. [Also] he did so much. The more we find out about it, the more the story expands. To condense it down you need to find a form that means you can get across the emotional truth of the situation and move on."

Turing is most famous for his role in cracking the German Enigma code which, so historians agree, shortened the war by at least two years and saved millions of lives. From an early age Turing was fascinated by the idea that one might build machines that can think, and his work in this vein not only helped him in his code breaking but also led to foundational contributions to computer science and modern mathematical logic. An example of the latter is Turing's work on the Entscheidungsproblem, which involves determining whether logical statements can be proved using algorithms and thus hints at the limits of what can be achieved using mechanised thought. He also came up with a beautiful theory of morphogenesis, offering a possible explanation of how patterns, such as a leopard's spots, might form in nature. (You can find out more about all of these topics in the further reading list below.)

How do you deal with the breadth of this work, and its difficulty, in a show? "Condensing [the work] was really difficult," says Byrne. "We describe how [one version of] the Enigma machine works. Morphogenesis: we had all the papers there and we went through it in a lot of detail. What do we need to know? It's about nature and equilibrium, it doesn't [need] any really new ideas. It's about how stable things can become unstable if that pattern of nature is lost. So it's about trying to find bits of [Turing's] writing, because it is all in his own words, that bring [those ideas] together and make it work."

"What was great was that [the maths] would actually stop the rehearsals," says York. "Because none of us would understand it and we all had so many questions. It was amazing to see the rehearsal literally come to a standstill. Weirdly, that was a great place to be for me because you got a sense of quite how big, how complicated and how broad these problems were." And again it is the music, composed by Dominic Brennan, that brings some of the mathematics across. "The music contains an awful lot of patterns and mathematics that fits with [Turing's] work," says Byrne. "Fibonacci sequences feature a lot later on [in the show]. The repetition of notes that gain and go round and round in circles. Then there are things like the bombe [the machine Turing built to crack Enigma]. We have a sequence at the end of the first half where they build the bomb. [It] is a very weird machine to look at because all the cogs are moving in slightly different patterns and at slightly different speeds. With different rounds of [the performers] singing [Dominic] imitated the inner workings of the machine. We [also have] very slabby ensemble numbers, but as soon as we go into Turing's head there is this intricate patterning and looping of ideas and thoughts again and again. [Dominic] was really keen to make sure that that was there."

For lead actor Richard Delaney the mathematics wasn't the only challenge. "There is a lot written about [Turing], but there is very little emotional content. As an actor playing a real person you reach for soundbites, for video footage and of course there is nothing like that." Yet, according to Byrne, members of Turing's family who attended the show let out an audible gasp, not just at Delaney's physical resemblance to Truing, but also at his portrayal of his mannerisms. "It takes a tiny pinch of imagination to go with it," he admits. "But [I was] looking at photos, any reoccurring postural quirks; there are brief mentions of him biting his nails, he had rickets when he was younger. You don't want to portray too much of a caricature, but there are elements you can tap into. I don't think it's a coincidence that some of the books that were written about Turing are also called The Enigma. This is a man who had escaped public life for so long. He wasn't really famous until the 1970s [long after his death] when all the information became available to us."

Another ambiguity about Turing's life is the circumstance of his death. The official version is that he committed suicide by eating an apple laced with cyanide, a response to the chemical castration that followed his conviction for what was then called indecency (it's a shameful fact that the British government has still not officially pardoned him). But there are doubts about this version of events. "The apple he was supposed to have eaten was never checked for cyanide," says Byrne. "No note was left behind. He was an incredibly ordered man, he'd bought new clothes that morning. They did find some things in his house that meant it could have been an accidental death. He had a room in his house called the 'nightmare room' where he used to keep all of his chemicals. It could be that he got some on his hands or his clothes and it just transferred across." 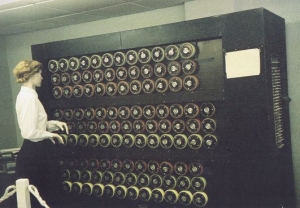 The Bombe, built in order to crack Enigma.

"The problem is that you can't stage ambiguity (though I'm sure [Richard] had a good go at it). [Turing] either actively put [cyanide] on the apple and chose to eat it and kill himself, or he did it accidentally. One of the challenges we had was how do you even begin to deal with that? By restructuring [chronological events], setting things up so you know it happens and building around [that] we found a way of being able to make it unsure for the audience. Some people say 'I like the way you left it open,' some say 'I like the way you deal with the suicide,' and some say 'I like the fact you say it wasn't suicide'. I think [Richard's] performance was wonderful in that. People were able to project their own Alan Turing onto him and onto the situation."

Turing's story has only nudged its way into public consciousness relatively recently. His code breaking work was classified and the remnants destroyed as the war ended, another tragic twist in his story that comes across well in the musical. It is only really events surrounding the centenary of his birth last year that brought him wider fame. Among those who know about him many have their very own Alan Turing. "We had people from the gay community come for whom Alan Turing has become a real figurehead as an [example] of someone who was absolutely brilliant and faced persecution in the recent past," says Byrne. "We had people from Bletchley Park [where Turing did his code breaking] come for whom he is a figurehead for all the unrecognised work that people did during the Second World War. We have had people from the computer movement come for whom he is one of the godfathers of the original thinking. We have had people from his family come who are starting to rediscover him. Everyone has their own slice of him. To try and put something together that satisfies all of these people has been a real challenge. I'm glad we did not think about it too much [at the start]."

You can listen to a longer version of this interview in our podcast.

Marianne Freiberger is Editor of Plus. She interviewed David Byrne, Richard Delaney and Natalie York in London in April 2013.