The mathematical forces that fought COVID-19

While the COVID-19 pandemic separated us physically, it also caused parts of our communities to pull together to meet the challenge. One group of people who have done this particularly well are mathematicians — those who already worked in the field of epidemiology when the pandemic started, and those whose expertise in building mathematical models could be repurposed to modelling the spread of the virus. 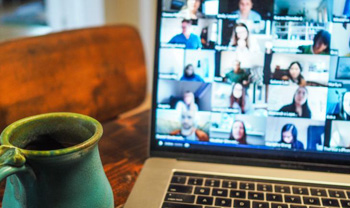 Online collaboration — something we all became used to. (Photo courtesy JUNIPER.)

While much of this mathematical effort took place behind the scenes, we all saw its results on a weekly basis, when government briefings talked about the latest estimates of the R number, the projections of the models, and what they meant for our daily lives. Without the mathematical groundwork it would have been impossible to decide what interventions were necessary to save lives, how to deploy the vaccines, and how to ease our way out of lockdown.

Two mathematical initiatives that have been particularly remarkable are Rapid Assistance in Modelling the Pandemic (RAMP) and the JUNIPER modelling consortium. At a recent event organised by the Newton Gateway to Mathematics both projects looked back over what has been achieved — and the results were impressive.

RAMP: An early call to action

RAMP came into being at the very start of the pandemic, in March 2000, following an initial call from the Royal Society for volunteers coordinated by a small group of mathematicians. The idea was to harness the skills of all people with experience in mathematical modelling in the UK, whether they work in academia or industry, and regardless of their particular field of interest: be it urban planning, soft matter physics, or the ventilation of buildings.

"We were overwhelmed by the scale of the response," Mike Cates, one of the mathematicians who coordinated RAMP, said at the Newton Gateway event. "We had 1,800 responses, but many of those were from teams of up to fifty people, sometimes more."

Some of the volunteers were allocated to existing epidemiological modelling groups which, in the face of the global emergency, were stretched to the limit. Other volunteers were given the monumental task of scouring the rapidly growing academic literature on disease modelling generally, and COVID in particular, for useful methods and results. These could then be filtered through to the Scientific Advisory Group for Emergencies (SAGE) and the modelling group that feeds into SAGE, known as SPI-M. 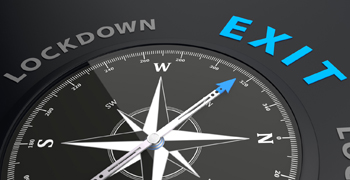 Mathematical modelling was crucial in finding the way out of lockdown.

These activities were supported by a dedicated research programme at the Isaac Newton Institute for Mathematical Sciences (INI), which RAMP helped to establish. The programme enabled researchers, including many whose work directly informed the UK government's policy on COVID, to exchange ideas and discuss their latest results in a number of virtual workshops and seminars throughout 2020.

During the initial phase of the pandemic, up to December 2020, RAMP volunteers produced an astonishing amount of work. Those who had been seconded to SPI-M to support SAGE published or submitted around 50 papers and reports, while literature reviewers assessed hundreds of papers, many at the request of SPI-M and SAGE. At the same time, RAMP volunteered some vital stress testing of the computer codes that implement the mathematical models used to understand the pandemic. The INI research programme resulted in a number of papers and talks freely accessible online.

When the first part of the RAMP was wound down at the end of 2020, the RAMP Continuity Network continued what RAMP had started. The network, developed and project managed by the Newton Gateway, linked up with other initiatives that had sprung up around COVID, such as the Virtual Forum for Knowledge Exchange in the Mathematical Sciences (V-KEMS). It provided funding for over 20 further research meetings — now finally being held in person — at the INI and the Newton Gateway, and a new staff member at the Royal Society responsible for communicating scientific advances to policy makers. "[The literature review group] has now become redundant, which is a good sign," says Cates. "After the shock of COVID the system that exists for peer review, and establishing what is literature that one should base decisions on, has now recovered its own internal equilibrium."

"The main [result of the RAMP] Continuity Network has been the series of programmes around the INI, with the Newton Gateway team running the show," said Cates. "When science becomes turbo charged and everything is developed at breakneck speed, you need extra meetings, and it's no good asking scientists to organise those. So I'd like to thank the Newton Gateway team for their incredible delivery of this programme."

Click here to see some examples of research done by RAMP volunteers.

The group that called RAMP into being on behalf of the Royal Society also included Julia Gog, a colleague of Cates' at Cambridge and a good friend of Plus. Gog's work had previously focused on influenza (you can read about some of it here). She had been a member of SPI-M for a while, and was asked to contribute to SAGE soon after the pandemic hit. As events were unfolding, she realised that a coordinated effort of epidemiologists would be useful.

"In May 2020, SPI-M [comprised] about 50 active participants," she said at the Newton Gateway event. "Lots of them came from large institutions, but many of us came from smaller research groups with particular interests and expertise. Quite naturally over spring and summer 2020 we started joining forces."

This sowed the seeds of the Joint Universities Pandemic and Epidemiological Research consortium, known as JUNIPER, which formally started in November 2020. 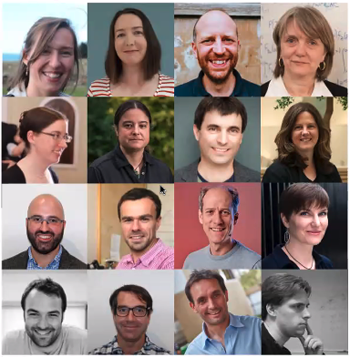 JUNIPER has three key aims. "One is to build a community so we could work together," said Gog. "This meant we could respond to the emergency much more efficiently and we could use our expertise appropriately. We'd see the urgent [requests] come in [from SAGE and SPI-M] and we could distribute them amongst ourselves, bringing in extra expertise. Also [we'd have] a massive support network under the two years of pressure we have faced."

The other two key aims are to interact and share with the wider science community and the general public, and to train the next generation of epidemiologists. JUNIPER is co-led by Gog and Matt Keeling of the University of Warwick and consists of research groups from seven universities: Bristol, Cambridge, Exeter, Lancaster, Manchester, Oxford and Warwick.

"The kind of work JUNIPER has done includes [work on] educational settings — schools and universities— and the impact of different vaccination strategies. In particular looking at new variants, [such as] the emergence of Delta and Omicron, is [an area] where JUNIPER was able to respond very quickly," said Gog. JUNIPER members have also helped plan the roadmap out of lockdown and supported the work of SPI-M generally, for example by providing weekly estimates of the R number and short-term projections.

Over its lifetime so far JUNIPER has produced over 80 peer reviewed papers and presented over 100 papers to SPI-M. More than twenty of these 20 were presented to SAGE and published as part of the scientific evidence supporting the government's response to COVID in the UK. The RAMP initiative and the events organised by the INI and the Newton Gateway allowed JUNIPER members to share their work with the wider science community.

Because of the nature of the research, which formed the evidence underlying heavy restrictions such as lockdowns, it was (and still is) essential to give the wider public a chance to understand and scrutinise it. This is where we here at Plus come into the picture: since its inception we have had the pleasure of collaborating with JUNIPER researchers to communicate their work in an accessible format.

"This [collaboration] has meant we have had in-house science writing and were able to communicate very directly from research to the public," says Gog. So far we have produced nearly 40 articles and 6 podcasts explaining basic concepts important in COVID, such as the R number or the growth rate, the mathematical models being employed, as well as their projections. Some of these articles have been referenced by government guidance, been circulated to press and policy makers, and included in papers to SAGE. See here to find out more.

RAMP was conceived as a temporary initiative and is now being wrapped up. The JUNIPER consortium continues its work, addressing COVID related challenges that still lie ahead, as well as new public health threats such as monkeypox. Both projects show what can be done when people decide to work together. The hope is that the connections, and ways of collaborating, that have been forged will be maintained and provide a blueprint for dealing with future emergencies.