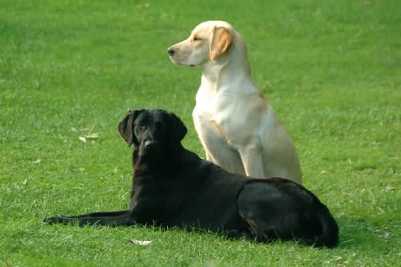 One dog plus one dog equals two dogs. ©freefoto.com

Having just learned that babies are born mathematicians, we were pleased to hear that man's best friend is not far behind. Using similar tests to those that demonstrate babies' maths skills, researchers have found that dogs can count too.

Animal behaviour experts Robert Young (Brazil) and Rebecca West (UK) tested a group of 11 dogs for basic counting ability and understanding of number. The dog saw them place a certain number of doggy treats behind a screen. If, when the screen was removed, the number of treats was different to what they expected they showed renewed interest. Using this method the researchers were able to show that the dogs had a concept of cardinality (the sizes of the piles of treats). Surprisingly, the dogs also seemed to be able to do simple arithmetic, reacting differently when one treat plus one treat equalled three treats rather than two.

The researchers, speaking to "New Scientist", think that this maths ability may have provided an evolutionary advantage to the dogs' ancestors - wolves. These wolves lived in large social groups and would have needed to keep track of the number of allies or enemies they had in the pack.

Mind you, Plus theorises that any dog faced with a constantly changing number of doggy treats would be a little interested!