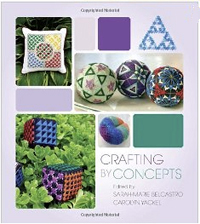 Have you ever wanted to explore the symmetries of the cube and octahedron through an old Japanese art form? Or to investigate fractals using tatting and string art? Or to study the helix by knitting bed socks? If so, or if you are at least open to the idea, then this book would be a good place to start.

The editors have collected nine projects from various authors, and have presented them attractively in this beautiful book. Each chapter is about one project, and is split into sections, usually including an overview, an explanation of the relevant mathematics, some suggestions for using the project in a teaching context, and the instructions for the craft activity itself. The level of craft expertise required varies somewhat: typically the book assumes that one knows the basics (of tatting, crochet, knitting or cross stitch, for example) and then gives the details required for the particular project. The authors of the various chapters assume different levels of mathematical sophistication (from maths used at secondary school to concepts usually first met at university), which might make parts of the book rather challenging for some readers. 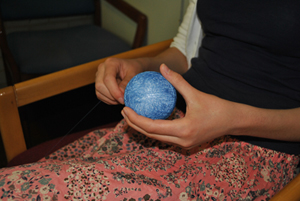 Making a temari ball, step one.

The book is wide-ranging, covering many mathematical topics and many craft ideas. Chapter 1 (Knit Knit Revolution) invites the reader to knit hats in the round. Chapter 2 (Generalised helix striping) concludes with instructions for knitting a hat and matching bedsocks with helical stripes. Chapter 3 starts with the author, Emily Peters, explaining that "This project arose when I realised an easy way to do self-intersecting knitting,'' and goes on to explain how to knit a cross-cap. Chapter 4 moves away from knitting, suggesting instead that one could create a Sierpinski triangle using tatting, beads, string art or cross stitch. There is then a chapter about creating particular symmetric patterns (diaper patterns) using needlepoint, before chapter 6, which advocates the study of group actions through cross stitch. Chapter 7 describes how to crochet a squared rectangle, chapter 8 describes the ancient Japanese art of temari and its applications to symmetry (see below), and chapter 9 is about creating semiregular tessellations using patchwork.

As is probably inevitable for a book with such an eclectic selection of projects, some appeal to me more than others. The illustrations of patchwork semiregular tessellations are lovely, but I do not have the patience for patchwork. The ideas in the chapter on group actions via cross stitch are very interesting, and I shall consider them further to see how I can use them in my teaching, but I am not convinced that cross stitch has many advantages over drawing pictures. I worry that the time involved in the stitching will detract from the immediacy of understanding the mathematics. On the other hand, it has made me think about designing a mathematical cross stitch sampler for my office wall. 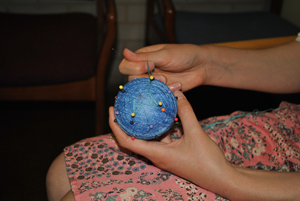 I showed the book to some of my undergraduate students. Like me, they were all struck by the photo of beautiful temari balls on the front cover. It would be difficult not to want to try making these, and so I met with a few students after their exams to try the idea (see the images). It's one of those lovely items that look beautiful with remarkably little effort on the part of the creator. The students all happily went off to finish their balls at home, and some talked about making Christmas decorations using the technique.

The other idea from the book that I have tried so far was inspired by the method given to construct a Sierpinski triangle using beads. Draw three vertices of an equilateral triangle. Pick a random point inside the triangle. This is the current point. Choose a random vertex of the triangle (perhaps using a dice). The next current point is the point halfway between the current point and the randomly chosen vertex. Repeat lots. I was involved with running a summer school for a group of mathematically talented Year 10 and Year 11 students. I used this as an ongoing project for the whole week — and didn't tell the students what they were creating. Instead of using beads, we simply marked points on using a felt-tip pen. To get a good effect, you need hundreds of points, but with so many students it only needed each person to put on a few points. I just gave them the instructions for how to add the next point, and let them think about the pattern that was developing before their eyes. I'm delighted to report that this led to some really good mathematical conversations about what they could see and why. 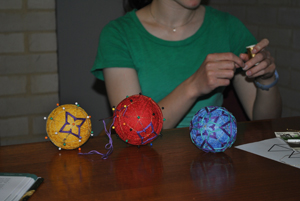 There are other projects in the book that I want to try. My strategy for finding time to do this will be to invite students at my college (mathematicians and non-mathematicians alike) to join me to try some of the ideas, and we can work on them together — it gives me the perfect excuse!

This book would be a great present for a mathematician interested in craft or a craft enthusiast open to thinking about mathematics.

I'd like to thank Adina Gamse, Laura Irvine, Alice Rabone, several of my colleagues at Murray Edwards College in Cambridge, and all the staff and students at the UKMT National Mathematics Summer School (week 1) this year for their enthusiasm to try these ideas, and for the interesting resulting discussions.

Vicky Neale is a Fellow and Director of Studies in Mathematics at Murray Edwards College, Cambridge. She has recently finished knitting a topologically interesting pair of fingerless gloves, and is partway through cross stitching a very large picture of one of her favourite Scottish islands.