Diffusion plays by the rules

Whenever you smell the lovely smell of fresh coffee or drop a tea bag into hot water you're benefiting from diffusion: the fact that particles moving at random under the influence of thermal energy spread themselves around. It's this process that wafts coffee particles towards your nose and allows the tea to spread around the water. Diffusion underlies a huge number of processes — from food digestion to generating the patterns in animal coats — and it has been studied intensively for over 150 years. Yet it wasn't until very recently that one of the most important assumptions of the underlying theory was confirmed in an experiment. 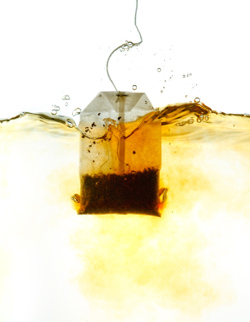 Your nice cup of tea is a result of diffusion.

The assumption is that a snapshot of a whole system of particles, taken at an instant in time, tells you something about how an individual particle will behave over a longer period of time, and vice versa, as long as the system is in equilibrium. To be more precise, if you measure a particular aspect of all the particles' motion, say their velocity, at a given moment in time and take the average, you get the same result as when you repeatedly measure the velocity of a single particle over a duration of time and then take the average over these values. In the mathematical language that describes dynamical systems this idea is expressed in the ergodic theorem.

The idea makes intuitive sense if you consider that individual particles move randomly and that one is much like another. If you throw a thousand identical dice and take the average of their values, you expect to get roughly the same answer as when you throw a single die a thousand times. But although scientists have generally accepted that the theory holds for diffusive processes, no-one had so far been able to check it in an experiment. It involves tracking the motion of individual particles, requiring sophisticated optical techniques.

The new result comes from a collaboration between two separate groups, one at the Department of Chemistry at LMU Munich led by Christoph Bräuchle and one at Leipzig University led by Jörg Kärger. Bräuchle's team developed a way of tracking individual dye molecules dissolved in alcohol. By shining a light on a sample, they were able to pin-point the location of individual florescent particles and track their motion through a series of snap shots. Kärger's team used a nuclear magnetic resonance (NMR) technique to measure the behaviour of all the dye molecules in a solution. This technique only reveals the collective, rather than the individual, behaviour of particles.

The idea was to apply the two techniques to identical samples of the solution. A parameter called the diffusion coefficient, which describes the diffusive behaviour of the system, could then be worked out in two ways: from the trajectory of a single particle and from a snapshot of all particles at once. If the ergodic principle holds, the results should be the same. And luckily, for the ergodic theorem and accepted physics, in this particular experiment they were. The result has been published in the journal Angewandte Chemie.

But the story doesn't end here. There are diffusive processes in nature that don't seem to adhere to the theory. "The diffusion of nanoparticles in cells looks like an interesting example," says Bräuchle, "and for us the important thing is to find out why the ergodic theorem doesn't hold in this case."