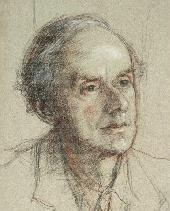 Paul Dirac. Portrait by R. Tollast, 1963; reproduced by permission of the Master and Fellows of St. John's College, Cambridge

This year saw the centenary of Paul Dirac, one of the greatest thinkers of the twentieth century. To mark the occasion, a public day was held in Cambridge, the scene of much of Dirac's greatest work, on July 20th, at which his many great achievements were remembered.

Dirac was born in Bristol on 8 August 1902, and educated at Bristol University and then Cambridge, where he obtained his PhD in mathematics, and then became a fellow of St. John's College. This was where he made his first great breakthrough in particle physics, in 1928, when he found a wave equation for the electron. The equation was an immediate success, in that it explained aspects of the electron that had previously been observed but not understood, and it brought Dirac wide acclaim in the mathematical community. In fact, it is the only equation to appear in Westminster Abbey, where it is engraved on Dirac's commemorative plaque!

But Dirac was guided less by the principle of utility than by that of beauty. A recurring theme with the speakers of the Centennial Day was Dirac's extraordinary intuition - the sense for mathematical rightness and beauty that guided him in his work. Peter Goddard, the current Master of St. John's, told an illuminating story. Apparently a journalist once asked Paul Dirac to explain to him the concept of mathematical beauty. Dirac asked the journalist "Do you know mathematics?", and when the journalist replied "No", Dirac said, "Then you can't understand the concept of mathematical beauty". Although this anecdote has been used to illustrate Dirac's supposed arrogance, this seems grossly unfair, as Professor Goddard pointed out - it was Dirac's deep understanding that allowed him to see the beauty of the concepts he worked with, and no facile explanations could describe it.

Almost incidentally, the Dirac electron equation made the remarkable predictions that there existed a previously unseen type of matter - a particle like the electron, but with opposite charge. Nowadays such a prediction seems less amazing - particle physicists seem to announce new forms of matter all the time - but at that time only two subatomic particles (the electron and the proton) were known, and there was no feeling that more would be found. The prediction was fulfilled four years later when the positron, as it is now called, was first seen.

Perhaps the reason Dirac is not as well-known as his achievements warrant is that he was a very quiet, retiring man. On the occasion of his centenary, his daughter, Monica Dirac, remembered him thus:

All of those who knew my father will remember that he was a very shy man and he always avoided interviews with the press or anyone else, and I think that this is probably why so many published accounts of his life failed to capture his personal side.

It is not clear whether a man as self-effacing as Paul Dirac would have much liked the posters dotted around this page, which were designed by the Institute of Physics to mark his centenary! However, perhaps they will achieve their aims of interesting more young people in particle physics and of bringing the achievements of one of the greatest thinkers of the twentieth century to the attention of as wide an audience as they deserve. 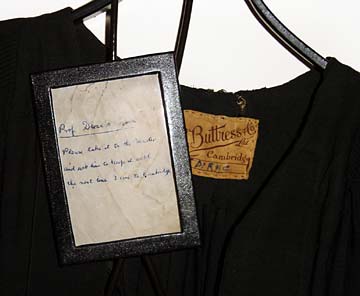 Dirac's gown, which hangs in the Master's Lodge at St. John's College. The note was written by Dirac, and says "Prof. Dirac's gown. Please take it to the Master and ask him to keep it until the next time I come to Cambridge."

Dirac will not be forgotten at St. John's. A notoriously absent-minded man, when he last dined at the college, he decided he would leave his academic gown at the Master's Lodge, so that it would be there waiting for him when he next visited. He never returned, but it still hangs in the lobby, together with the note he wrote to the Master. The current Master, himself a noted theoretical physicist, says that perhaps if mathematics in Cambridge ever reaches too bad a state, Dirac will return to collect his gown and put things right...