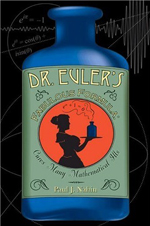 The hero of this book is Euler's formula:

This simple equation has been widely considered through the last two centuries to be one of the most beautiful formulae of mathematics, and Nahin tells us why.

The constant e is the base of the natural logarithm (and you might have used it in calculations on radioactive decay in physics lessons, for example), whereas &pi, as we all know, is the ratio of a circle's circumference to its diameter. Both e and &pi are irrational numbers, that is, you could never write down all of their decimal places as they can be proven to continue for ever. The symbol i denotes the square root of -1, a value that does not even exist on the standard number line. Each of these three quantities is therefore curious in its own right, and they were originally developed within very different areas of maths. So how on Earth does ei&pi equal exactly -1? It seems like the biggest fluke in the Universe — and this is part the formula's exquisite beauty. It is also fairly easy to derive the formula yourself, and the proof can be found in any textbook on complex numbers. And as Nahin's book shows, it is also one of the most influential formulae in the history of mathematics.

The book starts off gently enough, with an Introduction leading the reader through a few examples of the most fundamental skill in mathematics; constructing a proof. We see, for example, why √2 must be irrational through a simple proof by contradiction. The process of proving things is mostly ignored at GCSE and A-level, but really does give an eye-opening insight into how real mathematics is often like solving a intriguing puzzle, rather than slogging through homework exercises to practice the basic skills.

Through the following six chapters of the book, Nahin shows us many of the applications of imaginary numbers, Euler's formula, and other mathematical formulae and techniques that have been built on this eighteenth century foundation, both in pure and applied maths. Regular Plus readers might already know a little bit about some of these, and the sections in the book include: drawing regular prime number polygons, such as the 17-gon, using only a ruler and a compass; how to deconstruct any continuous function, such as a sound wave, into a set of sine waves — a technique that is crucial to modern gadgets like mp3 players. Nahin also shows us the maths of complex numbers lying behind the uncertainty principle of quantum mechanics, listening to the radio, and even how to build a telephone voice scrambler from simple electronics.

The book is well-written and illustrated with numerous diagrams and graphs. For those wanting a little more detail, or to follow up on the bibliography, the book is usefully cross-referenced and has hordes of end notes. But I do have one major warning for Plus readers. Although this book is written to be more easy-reading and popularist than a text book, it is still very heavy-going. More importantly it is pitched at the level of university undergraduates. However, if you're enjoying maths A-level, then this book has a lot to offer, even if you don't understand everything. Every chapter begins with an interesting introduction on the history of a particular problem and the lives of the mathematicians involved, before heading into streams of equations and derivations. The final section of the book gives a detailed biography of the genius behind all of this mathematics through the ages, Leonhard Euler. If you have a class project to write an essay on an influential mathematician, then Euler would certainly be an inspirational choice, and this final chapter a good place to start your research.