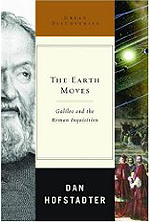 The Earth moves: Galileo and the Roman Inquisition

In these days of debates on climate change we're often reminded of that other great clash between science and authority, the staunch refusal by the Catholic church to accept scientific evidence that the Earth is moving around the Sun. Although Nicolaus Copernicus was the first astronomer to formulate a comprehensive heliocentric model, it was Galileo Galilei who got into trouble for it, and who embodies this clash between science and religion in the popular imagination. Galileo's telescopic observations added a substantial body of evidence to the theory, and he was tried and condemned for his views by the Roman Inquisition. The Earth moves gives an authoritative and fascinating account of Galileo's conflict with the Inquisition, guided by a sweeping understanding of the cultural, political, and philosophical landscape of the time. And, unless you're a historian of science, it's not short of a few surprises.

It's tempting to imagine Galileo's trial as a calculated act of oppression enforced by blood-curdling threats of torture, or else as a stage for a great philosophical debate between proponents of two conflicting world views. But, as Hofstadter's analysis of contemporary documents reveals, the trial itself was neither. Its outcome wasn't a foregone conclusion, and it was fought on what we'd today call a technicality. It was a "non-debate" without intellectual content, and to a large extent a result of political posturing and personal wranglings.

Pope Urban VIII Barberini, on whose initiative Galileo was summoned to court in 1632, had in fact been a great friend and admirer of Galileo, and, as a supporter of science, had suggested that their "minds vibrated in harmony" and written a poem in his honour. Galileo's telescopic observations had initially been enthusiastically received by the church, and the publication he was tried for, the Dialogue concerning two chief world systems, had been approved by the Vatican censor. Although the catholic church's interpretation of the scriptures firmly opposed the Copernican world view, church authorities were quite happy with astronomers using the heliocentric model for computational purposes. Astronomers were allowed to make calculations based on it, as long as they did not believe or proclaim it as fact. Galileo had successfully negotiated this knife's edge for most of his career — he had been investigated by the Inquisition in 1616, but let off and merely warned informally not to teach Copernicanism. The chief concern of his later trial was not to refute Galileo's evidence for the heliocentric system, or to find out how exactly his writings contravened the scriptures, but simply to determine whether Galileo had heeded the church's warning. It was a matter of obedience, and had it not been for political and personal intrigue, he might well have got off scot-free.

But despite the "intellectual weightlessness" of the trial, the book makes a fascinating read. Hofstadter starts off with vivid an insightful descriptions of the story's protagonists, Galileo and Pope Urban VIII. We learn, for example, of Galileo's crotchety nature, his work as a scientist and artist, and of his "amphibious" nature, "equally at home on the terra firma of science and the fluvial rapids of the metaphorical". We also learn of Pope Urban VIII Barberini's nepotism and vanity, but Hofstadter takes great care not to paint a two-dimensional picture of a brutish oppressor, emphasising Barberini's painfully conflicting roles as upholder of church authority and humanist sponsor of science. In fact, Hofstadter's continued attention to his characters' many-layered personalities and personal dilemmas is one of the book's strongest points.

Having set the scene, Hofstadter moves on to look at the part of Galileo's work that gradually convinced him of the truth of the Copernican system: his telescopic observations. Galileo had not himself invented the telescope, but he rapidly improved on the first prototypes and drastically increased their level of magnification. Using this strange new contraption, he observed the craters and mountains on the moon, sun spots, the moons of Jupiter, and the phases of Venus. His observations suggested that other planets were moving around the Sun, but his correct interpretation of these results hinged as much on his attitude to nature as on the observations themselves. Unusually for his time (though taken for granted today), Galileo assumed that nature was uniform — that similar objects are likely to behave in a similar way — and that the simplest explanation of a natural phenomenon is the most likely to be true. So if the other planets appeared to be circling the Sun, then this was an indication that the Earth did too. While, as Hofstadter points out, Galileo's observations did not provide absolute proof for the heliocentric system (and Galileo never claimed that they did), they added much evidence in its favour, and eventually convinced Galileo that the Earth was indeed moving around a stationary Sun.

Galileo never openly revealed his Copernican leanings, only communicating them in private letters, but they did not escape the church authorities. In 1616 the church prohibited the teaching of Copernicanism as fact, and in the same year investigated Galileo for a potential breach of the prohibition. Partly due to the influence of Galileo's powerful patrons, the investigation was eventually called off, and Galileo issued only an oral warning. The closest he ever came to explicitly discussing the heliocentric system with the church was a result of scientific arguments with two church men, Orazio Grassi and Francesco Ingoli, resulting in two essays in which Galileo hinted at his true convictions. But while these disputes gained him no favour with elements of the church, the two men were writing to Galileo in a private capacity, and never actually accused him of heresy. Apart from private disputes like these, the church never engaged in the actual science of Copernicanism.

Encouraged by the lenient treatment by the church, as well as support from the Pope, who hoped to boast the church's progressive attitude to science with a new publication by Galileo, Galileo set out to write the Dialogue, which eventually got him into trouble. It was published in 1632, but it was more than the purely hypothetical treatment of the heliocentric system the Pope had hoped for. Written as a dialogue between fictitious characters arguing for and against the heliocentric system, and more speculative than scientific in nature, the Dialogue clearly revealed Galileo's leaning to Copernicanism. This was too much even for a sympathetic Pope, who moreover felt personally insulted, believing that the church had been "hoodwinked" into approving the Dialogue. Soon after its publication Galileo was summoned to Rome.

The second part of the book looks at the trial itself and reads more like a political thriller than a work of historical scholarship. Hofstadter disentangles the perplexing trail of historical evidence, unpicking the scant records of the trial as to who said what, when and why. Many questions remain unanswered by this evidence: why had the Dialogue passed the Vatican censor in the first place? Why did Galileo swing back and forth between compliance and defiant self-incrimination? Why did a last minute plea bargain mysteriously collapse? Hofstadter finds answers in psychology, a thicket of personal rivalries, and political pressures, but also elucidates the interplay between these petty immediate issues and the wider cultural concerns of the period. The merits of the actual science were never discussed at the trial: since it contravened the scriptures, it obviously had to be nonsense. Neither did Galileo's most obvious philosophical line of defense — that the heliocentric system did not contradict the scriptures but merely demanded their re-interpretation — find any favour. In fact, a letter in which he had once argued along these lines was used as evidence against him, since laymen were prohibited from formulating their own interpretations of the bible.

Galileo's trial was unfair by any modern standard, but its outcome was by no means a foregone conclusion. It might well have have ended with nothing more than a slap on the wrist, especially since Galileo eventually gave in, claiming that his apparent support for Copernicanism in the Dialogue had been inadvertent, and that he was willing to be punished for his vanity. But someone, somewhere, had decided to make an example of Galileo. The last interrogation was conducted under the threat of torture, and he was convicted of being "vehemently suspected of heresy", and sentenced to life-long house arrest. This relatively benign sentence was a result of Galileo's abjuration: "I abjure, curse, and detest the above-mentioned errors and heresies," is how he denounced his work on his knees.

Was Galileo tortured to extract his denunciation of Copernicanism? There is no evidence that he was, and torture would have been prohibited by church law on account of Galileo's standing. The Roman Inquisition's stance on torture was in fact carefully regulated, and, contrary to popular belief, no more gruesome than that of many Western powers today. As Hofstadter points out, "the aim [of torture] was and remains to discover some secret intention by means of a measurable administration of pain that does not — theoretically — leave any permanent damage". But permanent damage or not, the threat of torture must have made a deep impression on a by then old and frail, if still defiant, Galileo.

The Earth moves is a scholarly book, sticking close to historical sources, and stringently separating speculation from historical fact. But Hofstadter also provides a sweeping view of the wider cultural landscape of the time, resisting its compartmentalisation into the usual categories of art, science and philosophy, and holistically drawing on all of them. An example of the many poignant observations in this book is Hofstadter's comparison of the church's philosophical inflexibility and artists' inability to get the perspective right when painting pictures of heaven on the cupolas of cathedrals: just as the anamorphic illusion of heaven fell apart as the observer moved around the cathedral, so the church's stance on the structure of the cosmos only held up if you didn't move, didn't breathe, and not under any circumstance opened your eyes and observed the world as it is. Hofstadter's insightful illustrations of the heavy cultural symbolism surrounding the objects of nature, drawing from art, folklore and religion, is what lifts this book out of the history of science genre and makes it fascinating to anyone interested in culture.

Hofstadter's narrative skillfully interweaves the many layers of the Galileo story, from the petty to the philosophical, the personal to the political, and from the actual science to its place in culture. The result is a captivating story that not only sets the record straight about Galileo's trial, but also puts it into a context that is still relevant today.

Marianne Freiberger Co-Editor of Plus.