'The equation that couldn't be solved' 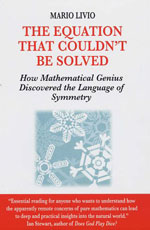 The equation that couldn't be solved: how mathematical genius discovered the language of symmetry

Mario Livio's new book tells the story of the elusive quintic equation and how, from the mysteries of this unsolvable puzzle, group theory was born. This branch of mathematics describes and defines symmetry, and at the core of the book is a strong sense of just how much of our behaviour and appreciation of the world around us depends on our ability to perceive symmetrical proportions. Livio is very much present in the writing, an instantly likeable narrator whose passion for his subject is contagious. His descriptions of symmetry are punctuated by visual images, such as pictures of famous mathematicians, optical illusions and diagrams of words and numbers. For a more "hands on" read, the book contains some mind-bending equations, with appendices of solutions. There are also some fascinating side-comments, such as his observations on genius and how close (or not, as the case may be) we are to understanding its true nature.

The first chapters justify why the subject is worth delving into by providing a wide-ranging tour of familiar cultural icons and biological qualities that have some basis in symmetry. The range is fascinating: Livio covers the evolution of predator-recognition, the golden mean in art, strategies for choosing a life-partner, why some pieces of music work so well, and, perhaps most crucially, the best way of attacking a rubik's cube. The next part of the book focuses on the mathematical equations that underpin symmetry, and describes not only maths, but also mathematicians. Resurrecting my knowledge of quadratic equations (initially a daunting thought) was made worthwhile by Livio's enthusiasm. The juxtaposition of the surprisingly colourful lives of mathematicians and the dry facts behind their discoveries works well, and cameos of researchers such as Ferrari, Cardano, Tartaglia and Ruffini prove quite addictive. The two chapters on a "poverty-stricken mathematician" from Norway (Niels Henrik Abel) and a "romantic mathematician" from France (Evariste Galois), make particularly compulsive and poignant reading. These mathematicians had tragic and bizarrely symmetrical lives. Both independently demonstrated that the quintic equation could not be solved using conventional mathematics, thereby paving the way for the development of group theory. Perhaps most illuminating is the use their theories were put to, and the final part of the book clarifies the tremendous debt many key scientific theories owe to the mathematics of symmetry.

If the book has a weakness, it is that it jumps between disparate topics fairly rapidly, which can be stimulating but also disorientating at times. The book makes reference to a great many key theories in science and mathematics, taking the reader from quantum mechanics to string theory in a few chapters. The explanations of these are remarkably cogent, but even so, it's a whistle-stop tour, which may require a certain amount of re-reading or head scratching. It is also possible that readers with a limited mathematical background might find some of the material heavy-going.

What makes for a good read is Livio's coverage of many of the "life, the universe and everything" topics, and the reassuring knowledge that all this is based on well-grounded, well-researched fact. His references and notes are comprehensive enough to satisfy the most pedantic of readers, and although the book is likely to end up on a "popular science" table, the scholarship involved and breadth of his research suggests that it could make a useful reference tool as well. Better still, Livio has the rare ability to explain complex ideas in terms simple enough to remember and later wax lyrically about across your coffee table or local pub. It's a book to make you feel (if only temporarily) like a genius yourself.

Charlotte Mulcare has recently completed a PhD in human genetics. The project used a series of different statistical techniques to identify historic signatures of natural selection from modern patterns of genetic variation. She is currently job-hunting...