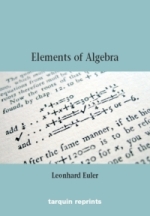 Leonhard Euler was one of the greatest and most prolific mathematicians of all time. His work was of vital importance to a bewildering variety of fields, many of which he himself created. Yet, as with most modern mathematicians, his work was and remains inaccessible to most of us. Elements is his most accessible book, a cross between a textbook and a curriculum ranging from the most basic of ideas up to quite sophisticated mathematics. The preface of this new version of an English translation lists two anticipated outcomes: bringing this most general of Euler's outputs to a wider audience, and inspiring readers to look at more of Euler's works. The second aim is rather puzzling, since the first aim suggests that a broad readership is being sought. Yet the editor, Chris Sangwin, acknowledges that few of Euler's other works are accessible. There is perhaps also some conflict with the publisher's declared aim of reprinting "classic works important to contemporary mathematicians". Who, then, should read the book?

A good answer is "anyone interested in learning mathematics." The book is a work of didactic genius, taking the reader on a journey from the most elementary parts of mathematics — defining quantities, numbers, and arithmetic operations — and ending with a variety of approaches to solving polynomial equations up to the fourth degree. The style is engaging; the structure and language is clear, and the explanations logical. The approach is surprisingly modern and does not suffer either from being nearly 250 years old, or from being an edited version of a "charming" English translation from the 19th century. In fact, this English text comes from an 1822 English translation of a French translation of the original German. That such writing can still be called clear and readable is something of a miracle, and testament to Euler's original clarity and readability. This edition has excised various later accretions such as editors' footnotes and introductions, as well as an entire chapter added by Lagrange, material which may be reproduced if a reprint of Part II of Euler's work is ever attempted.

Elements was written at the end of Euler's shining career, by which time his reputation was cemented as one of the greatest mathematicians of all time, having spawned hundreds of important papers, mentored many mathematical offspring, and fathered a large family. His energy seemed never to flag, and even blindness and a dizzying variety of demands on his time did not prevent him from writing a book to take the reader from near-ignorance of mathematics to decent proficiency. His blindness forced him to dictate the book to a young servant, who in the process learned a great deal of mathematics. One is tempted to speculate which came first, the desire to produce a great textbook, or the desire to teach this young servant. Few of Euler's other works were aimed at a general audience. Regardless, both the servant and the world have benefited.

The book itself benefits from Euler's great talent and long experience of mathematics. Less talented and less experienced authors might not recognise that even in the basics, in the elements, there is complexity and mystery. But Euler spent a lifetime thinking about mathematics and connecting even his most advanced work with simple but deep questions like "what is a number?" and "how can we relate two magnitudes to one another?". Moreover, his voluminous scientific output lent his prose a practised sparse elegance which we moderns are in danger of loosing. The written word has been the most important currency of scientific information for centuries now, but clarity of thought and expression may have peaked some time ago. They are perhaps in terminal decline in the modern era, thanks to the usual suspects which I won't rehearse here. This paragraph itself is a perfect example: rambling, ungrammatical, and hard to read, in perfect contrast to Euler's clear sentences, logical paragraph structure, and well-thought sequence of paragraphs.

For me, the mystery of this old school textbook, which doesn't hold your hand and so seems to lead you rapidly through a ton of material, is that so much is conveyed in a spare, clean style. In fact, I expect that more material is covered than in more modern textbooks which spend an age going over and over material, and yet books like Elements seem less hurried than modern ones. As an example, the introduction of letters into algebra, such as the expression f+m+b+x takes only a single paragraph. In the preface, Sangwin invites the reader to "reflect on the curriculum Euler sets out here and that [which] we use today." In this vein, it is fair to wonder whether belabouring such ideas in modern times genuinely helps either the mathematically gifted or those who struggle. But that's another story.

Euler begins his story with "Whatever is capable of increase or diminution, is called magnitude, or quantity," and from this unusually clear definition goes on to very succinctly define mathematics. The remainder of the book helps set out and teach what mathematics does and how to do it. Interestingly, he takes a couple of paragraphs even to convince the reader that numbers are involved. Indeed, his relation of magnitude to number is suggestive of dimensional analysis, although dimensional analysis is "regarding the different kinds of quantity," as opposed to what Euler is interested in here, namely algebra, in which "we consider only numbers, which represent quantities". He even takes time to explain that "+" is read "plus" and indicates that the two numbers on either side of it should be added, although probably the example he gives that "26+16 makes 41" was a mistake of the current editor or typesetter, since it is hard to imagine it surviving so many translations and edits.

The use of examples is one aspect which makes the text feel very modern, and certainly makes it easier to read and learn from. The relatively informal style, and the concrete nature of some of the examples (such as calculating the value of a person's assets) also gives Elements a modern feel which belies its age. Combined with extensive "questions for practice" — with solutions — in some sections one almost forgets that this is an old book, rather than an unusually brilliant new one. It is reassuring that the questions of students all those years ago were the same as those today. For example, Euler deals cleverly with the common sticking-point of why a minus times a plus is a minus, while a minus times a minus is a plus. Although he begins with the modern trick of letting a minus signify a debt, he doesn't make the common modern mistake of trying to continue the analogy and work out what the minus of a debt is. Euler argues that -a × -b cannot be -ab since this what is given by -a × b and the change in sign of b should give a change in sign of the answer. This explanation is closer to the "real" reason why we adopt the convention that a minus times a minus is a plus.

The preface declares that there is "no need to comment on the substance of Euler's work here, since the text speaks for itself." It certainly does, but I think that a more expansive biography of Euler would widen the readership. So would setting Elements in the context of Euler's life and work, and in the history of mathematics and mathematical education. To me, a modern set of footnotes would have helped here, since some fascinating observations can be made even in the first handful of pages. For example, Euler's definition of the integers seems to exclude zero. Later, he gives good reason to suppose that there is an infinity of numbers between two integers, but he couldn't know of the different "sizes" of those infinities which Georg Cantor discovered, and which a brief note might bring alive. He also anticipates the great utility of imaginary numbers. An index would also increase the usability of the book, especially for those interested in the history and development of mathematical concepts.

Overall, the book is to be highly recommended. The broad range of elementary topics means the book can and should be referred to often. The structure, readability, and standard of explanations lead to a rapid and rewarding learning experience, while the elegance of the prose is frankly a joy to read. The book soothes ageless anxiety caused by learning the mysteries of logarithms and imaginary numbers and yet does not shy away from addressing practical problems, even how to calculate interest — a footnote on the dangers of credit cards would go well here.

Read Chris Sangwin's article on Euler's Elements in this issue of Plus.