This month 70 teenage girls from nineteen countries including Bulgaria, Saudi Arabia and Finland came to the University of Cambridge to participate in the inaugural European Girls' Mathematical Olympiad (EGMO). 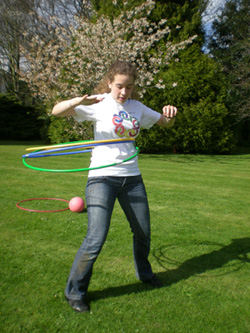 Similar in style to the International Mathematical Olympiad (IMO), but open only to female participants, the standard was extremely high, with seven girls awarded gold medals. Poland was the top-performing country overall, with participants from Bulgaria and the USA achieving the highest individual scores.

Medals were awarded as part of the gala dinner celebrations held at Murray Edwards College, hosts of the event, which were organised in partnership with the UK Mathematics Trust.

As well as competing, participants were able to spend time with their peers from all over the world, learn about different cultures and sow the seeds of life-long friendships. Competitors sat two exams, each consisting of four extremely difficult problems, which can be viewed here. Other activities included a trip to Bletchley Park, birthplace of the modern computer, punting, and a mathematically focussed tour of Cambridge.

Several of the participants are likely to be coming to the University of Cambridge and other top international universities as undergraduates in the near future, including members of the UK team (which came 12th overall and took home two individual bronze medals).

At the end of the event, the UK team passed the EGMO flag to Luxembourg, hosts of EGMO 2013. Organisers hope that EGMO will build on the successes achieved in its first year and go some way to redressing the imbalance of the sexes participating in international mathematics competitions.

The event was made possible by generous sponsorship from several organisations and individuals including ICAEW, HP Labs, Cantab Capital, the London Mathematical Society and Jane Street. The Department of Applied Mathematics and Theoretical Physics and the Department of Pure Mathematics and Mathematical Statistics hosted the exams, while Murray Edwards College provided facilities for the participants, team leaders and organisers, which were instrumental in ensuring the delivery of a memorable event.