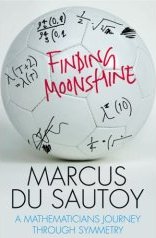 Ever wondered what mathematicians do all day?

Finding Moonshine tells the story of a year in the life of the author, an Oxford professor known for his books, as well as radio and TV presentations of mathematics to the general public. Over the twelve chapters, each representing a month in his life, Marcus du Sautoy blends his personal experiences as a research mathematician and his pursuit of symmetry with the history of group theory and the mathematics of symmetry itself.

He potters about listening to music (for mathematical inspiration) and drinks his way through countless cups of coffee in the hope a theorem will come out at the end. He works better from home, because his office reminds him too much that he ought to be doing some serious thinking. He tells us about the problem that has obsessed him for years and shares with us the emotions that accompany progress, or lack of it, including the fear or envy when progress is made by others. He conveys the patience and sheer stamina required for most research in modern mathematics, but we also get an idea of the thrill experienced when a step is made towards uncovering a new mathematical truth.

The book is more than the diary of a working mathematician though. It is a guidebook through symmetry. I am sure we all have an idea of what symmetry is — that quality of shapes with one side being a mirror image of another side. The author explains what symmetry is in the eyes of a mathematician. A symmetry is any possible repositioning (or transformation) that produces no apparent change. Think of a combination lock on a suitcase, where three wheels have ten faces each. If I turn each wheel ten times (by a tenth of a full turn), then I end up with the same number I started with.

Du Sautoy eases us in gently, with two chapters at the beginning devoted to the history of symmetry in ancient cultures, from an Etruscan dice and Celtic stone carvings to Arabic tiles. The narrative is engaging and includes lots of anecdotes illustrating the author's obsession with the subject, for example a symmetry-treasure-hunting visit to the palace of Alhambra in Granada.

Du Sautoy goes on to tell us about the origins of group theory in the work of Niels Henrik Abel and Evariste Galois in the early 19th century. Abel discovered that, in contrast to the familiar formula for the solution of a quadratic equation, there is no formula for the solution of a general quintic equation. Tragically, his work took a bit too long to be recognised and he died at the age of 26 from poverty, on the very day that his professorship in Berlin was announced. The troubled Frenchman Galois worked out a systematic way of determining which equations could be solved, which could not, and the reasons why. He too experienced difficulties in getting his work accepted by the mathematical establishment. But it was his fiery character that got him into a lot of trouble. He spent some time in jail, where he developed his mathematics further (there was little distraction in there!). On his release he was challenged to a duel, and on the eve of the fateful encounter he hastily wrote down his theorems and proofs. After his death, at the age of 20, mathematicians started to appreciate the treasures hidden within his manuscripts.

Symmetry plays an important part in the solution of equations and Galois' work signalled the beginning of the quest to understand and classify all possible types of symmetry. Much as every integer can be broken down into a product of prime numbers, the symmetries of any object can be constructed from a collection of basic building blocks known as simple groups. The defining feature of simple groups is that they cannot be broken down into smaller groups. The challenge was to find and classify all possible finite simple groups. At first it seemed that most of these groups would fall into a few straightforward families (some of which were discovered by Galois himself). But in 1965 a new simple group that did not fit into any of the standard families was discovered. It consists of 175,560 symmetries.

Suddenly scores of mathematicians were rushing to beat each other in finding more of these exotic groups. Over the next ten years, 26 new simple groups were found which did not belong to any standard family. They became known as sporadic groups. The largest is known affectionately as the monster and has more symmetries than there are atoms in the Sun.

Finding these sporadic groups was a real feat. At one point, there was a team of mathematicians working 24 hours a day in Cambridge, taking turns at finding and recording as many facts as possible about these groups, and finally trying to construct the monster.

At the same time another group of mathematicians was trying to prove that there were no more than the known 26 sporadic groups. In the 1980s a complete description of the basic building blocks that can be used to produce all groups was achieved. All sporadic groups had been found. The proof that there was not a 27th waiting to be discovered ran to thousands of pages across 500 journals. It is still being checked.

The book contains a few chapters exploring symmetry in music and modern science, to keep non-mathematical readers interested and to give them a context for the more technical material. I found, however, that some topics, such as the use of symmetrical inkblots by psychologist Hermann Rorschach in the 20th century as a means of unblocking a patient's mind, do not illustrate the mathematics of symmetry and are perhaps a contrived effort to appeal to a wider audience.

The title, Finding moonshine, refers to a mathematical term coined by the mathematician John Conway to describe an elusive mathematical connection between the monster group and an important function in number theory, known as the modular function. The last chapter of the book describes the discovery of moonshine, but we do not learn much about the implications this connection has in other branches of mathematics or modern physics. Nonetheless, this book is engaging and offers a witty and loving account of mathematics and mathematicians. It shows, using the words of the author, that "Mathematics has beauty and romance...It's not a boring place to be, the mathematical world. It's an extraordinary place; it's worth spending time there."

Karla Diaz Ordaz obtained her PhD in Mathematics at Imperial College London in 2006. After a year as a post-doc, trying to uncover the deepest secrets of mathematics on the beaches of Rio de Janeiro, she now does research on ergodic theory at the University of Warwick.