Male lions tend to roam on their own, but lionesses are more sociable. So when through your binoculars you see a large group of those felines lounging about in the distance, what do you deduce? That most likely there are lionesses among them. 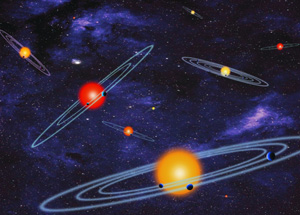 The artist concept depicts multiple-transiting planet systems, which are stars with more than one planet. The planets eclipse or transit their host star from the vantage point of the observer. This angle is called edge-on. Image courtesy NASA.

This is the rough idea behind a statistical technique called verification by multiplicity, and it's how NASA's Kepler mission found the huge haul of new planets it announced last week. It identified 750 planets outside our solar system, orbiting a total of 305 stars. The mission uses a space-based telescope to see if any of the stars in its field of view periodically become dimmer. If that's the case, then it is possibly caused by a planet that passes in front of the star on its orbit. The change in brightness is tiny: for Earth-like planets it's only 1 in 10,000. But if such a change happens periodically and always lasts the same length of time, then what you have is a candidate planet.

One of the problems with this approach is that, in order to observe the dimming effect caused by a planet, the plane in which the planet orbits must be lined up edgewise with the observer. The probability that the orbit is aligned in just this way is equal to the diameter of the star divided by the diameter of the orbit. If the planet is similar to the Earth and orbits a star similar to our Sun, then that probability is only 0.5%. For larger star the probability can be closer to 10%, but still it's not huge. So in order to have a chance to detect many planets, particularly Earth-like ones, you need to look at thousands of stars. This is why Kepler has a huge field of view, 105 square degrees compared to less than one square degree of most telescopes, which allows it to observe 150,000 stars.

It's from that large collection of stars that Kepler sifted out a few thousand that came with candidate planets. The problem now is that some of these might be red herrings. For example, Kepler might have picked up a binary star system, with two stars orbiting each other, rather than a star with a planet. Verification on a case-by-case basis would present a huge amount of work. And this is where verification by multiplicity comes in. Kepler identified hundreds of stars that came with multiple candidate planets, making it more likely that they were real. A careful study of these revealed the 715 new worlds that have been discovered.

"Four years ago, Kepler began a string of announcements of first hundreds, then thousands, of planet candidates — but they were only candidate worlds," said Jack Lissauer, one of the scientists who led the research. "We've now developed a process to verify multiple planet candidates in bulk to deliver planets wholesale, and have used it to unveil a veritable bonanza of new worlds."

Four of the new planets are less than 2.5 times the size of the Earth and orbit their star at a distance suitable for liquid water, so there's a possibility they may harbour life. Some of those new worlds may turn out to be very similar to home.