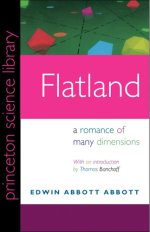 Flatland: a romance of many dimensions

This is a new edition of an old classic. Abbott wrote this beautiful tale over a hundred years ago under the pseudonym A Square. It still is one of the best introductions to a mathematical world of higher dimensions, and it's an amazingly imaginative social satire, too.

Flatland is set in a flat land: the two-dimensional plane inhabited by straight lines, polygons and circles. In Flatland, the more sides you've got, the higher up the social scale you are. "Infinitely-sided" circles form the highest cast consisting of priests, and straight lines the lowest, consisting of — who else? — women. No-one in Flatland has any notion of a third dimension; everything is limited to one big, flat plane.

In this well-ordered world lives the narrator, A Square, a professional gentleman and proud father of four pentagonal sons (for male children have a good chance of being born with one more side than their fathers). One day, the Square meets an alien: a being claiming to be a three-dimensional sphere from Spaceland! While most Flatlanders would flatly reject such an outrageous idea, Mr Square is reminded of a dream in which he visited Lineland and vainly tried to convince its inhabitants of the existence of a second dimension. After much debate and many analogies, the sphere finally manages to convince Mr Square. He glimpses a world that few Flatlanders have seen before, but those who have are not to be trifled with and his enlightenment ultimately proves to be his undoing.

This is an extremely well-thought-out story; every aspect of life in Flatland is accounted for, from housing and climate to the way in which Flatlanders recognise each other's shape (being unable to see their world from above). Abbott's descriptions of how the square manages to imagine a three-dimensional world are a great guide to how we might go about imagining four (or more) dimensions. In fact, the square even conjectures that a four-dimensional world might exist, much to the annoyance of the sphere which considers itself supreme. Abbott's analogy is clear and strong, and will make sense to the most unmathematically-minded reader. It's a beautiful defense of mathematical thought and its power to open doors to fascinating new worlds.

But the tale works on other levels, too. The rigid social structure of Flatland practically begs to be exploited for social and political critique, and Abbott does this with a great sense of humour. Sexism, social suppression, snobbery, the self-interest and narrow minds of the bourgeoisie; Abbott deals with all of them, and the issues are just as relevant today as they were in the Victorian era. Women, for example, though deemed to be totally degenerate in shape and mind and to have no dimension to speak of, are also exceedingly dangerous because they can spear you. They are obliged to constantly utter a warning cry, lest some unfortunate male might run into the sharp end of them. Then there's the question of whether the triangular underclass, many of whom are not even isosceles, would benefit from an education or not. And there's a funny episode in which the use of colour allows the few-sided rabble to disguise itself as many-sided nobility, almost bringing about a revolution and ultimately leading to the abolition of colour. And do the high-powered priests secretly know about the third dimension?

This story is about mathematical dimension in particular, but in a general sense it's about our wonderful ability to transcend our limitations — and our stubbornness when it comes to accepting new ideas, be it because of small-minded self-interest or more sinister reasons of mind-control. This edition by Princeton University Press features a new introduction by Thomas Banchoff which serves as a good companion to this multi-dimensional piece.