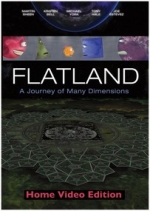 Flatland: The movie is based on one of the best mathematical tales ever written. Inhabiting a two-dimensional world populated by polygons and ruled by circular tyrants, a bright young hexagon, through sheer mathematical willpower, imagines a third dimension. This is dangerous territory: any mention of a third dimension is strictly illegal, and, unbeknownst to Hex, linked to the true fate of her absent parents ...

The original book Flatland: a romance of many dimensions was written in 1884 by Edwin Abbott Abbott (see the Plus review). This beautiful story is at the same time a maths lesson, a social satire, and a tribute to our wonderful ability to transcend our limitations. The animated film version, featuring the voices of Martin Sheen, Kristen Bell, Tony Hale, Michael York, and Joe Estevez, is aimed primarily at teachers and educators who want to introduce their students to the amazing world of mathematical abstraction.

The movie does its job very well indeed. The graphics are amazing in places (it was great to see the Mandelbrot set unfold the full power of its beauty) and the movie is worth watching if only to see the heroes' fantastic journey into the third dimension. The maths bits — how to make the abstract move from one, then to two, and then to three dimensions — are discreetly dropped into the plot without ever giving you the feeling that you're being taught something. I watched the film with a non-mathematician, who was duly fascinated and afterwards spent some time mulling over the concept of four, five, and even infinitely many dimensions.

The movie doesn't stick to the story in the book, in fact it greatly simplifies it. It misses out on some of the finer points, but the main message, mathematical and otherwise, remains intact, and the simplification is probably permissible given the target audience. The story also receives a welcome gender facelift. Women are not degenerate line segments, who have to emit warning wails lest they poke someone in the eye with their sharp end, but fully-fledged polygons. The central character, Hex, is female, and so is one of the villains. The ending is a happy one.

I'd recommend Flatland: The movie to any maths teacher, any time. My only criticism is that the music (which was very good) drowned out the dialogue at times, and you really do have to catch that dialogue if you haven't read the story before. But in terms of motivation, this little movie could achieve in its half-hour or so run-time what other teaching resources might fail to achieve in a whole string of lessons — not surprisingly given the great book it's based on.

The Special Educator Edition of Flatland: The Movie is now ready for purchase directly from the Flatland website. The purchase of the DVD includes a school site license, a bonus featurette discussing the 4th dimension, behind-the-scenes footage, and maths worksheets for use in the classroom. In addition to regular sale, Flat World Productions is also taking pre-orders for the private home use DVD and hope to begin fulfilling those orders by the early autumn.

I had a student ask how all the two-dimensional characters could see each other since they have no height, only length and width. How would you respond to this question?
Thank you.

I researched this in college and can tell you...