'Game theory and the humanities' 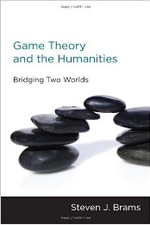 This is a fascinating book on the application of game theory to situations in philosophy, politics, law, history, literature and even the Bible. The author, Steven Brams, shows that real insight can be obtained into optimal strategies for dealing with some famous dilemmas. But be warned that the author assumes a knowledge of game theory in his readership, so this is not a book that can be picked up and fully understood unless you have previously read a standard text on game theory.

Formal game theory originated with a famous 1928 paper by John Von Neumann, elaborated into a classic 1944 book by Von Neumann and Oskar Morgenstern, Theory of Games and Economic Behavior. In their book the authors showed that there are 78 structurally distinct 2x2 ordinal games: these are games in which two players are each given the option of two strategies, giving four states or outcomes which can be ranked from best to worst. The present author lists 57 of these games in an appendix, together with a glossary on the massive number of technical concepts (read: jargon terms) that have been introduced into the subject since. However this is not enough for a reader who has had no exposure at all to game theory.

Assuming, then, that some necessary background reading has been done first, there is much in this book to interest and attract the reader. Brams is a professor of politics and does not fall into the trap of attempting to reduce complex dilemmas to oversimplified and meaningless games. Instead he tries to maintain the essential complexity of each situation and examines the possible moves and outcomes in a commonsense manner which reveals a certain richness of insight. There is enough here to convince the sceptic that game theory is not just applied common sense, but does have some real content. Much of this is due to the associated theory of moves (TOM), which allows players to change their strategies during a game on the basis of "backward induction" (i.e. learning from initial outcomes).

Brams chooses situations which are familiar to us, but to which he often manages to give a new twist. He begins by surveying situations in literature, taken from works such as Othello, Tosca, Faust, Rigoletto and Sir Gawain and the Green Knight. Curiously, he skips lightly over detective fiction and classic games of move and counter move such as Holmes versus Moriarty. He concludes that the aspects of literature where game theory is relevant are those where a carefully constructed plot is uppermost, but that in much of literature human emotion and irrational decision-making dominate proceedings, as indeed they do in life.

The first intensive analysis in the book is of Biblical dilemmas. Brams starts with Abraham's decision to obey God and sacrifice Isaac. Should Abraham have defied God? Game theory suggests that this might have been a productive thing to do. Brams then analyses Samson and Delilah and later deals with Moses and how he persuaded God not to punish the Israelities for the golden calf. The interesting thing is that by making God a player in the games that he analyses, Brams sheds a new light on God's motives, allowing him to be scheming, manipulative, sometimes vengeful, but always a good player. Brams goes on to analyse Pascal's wager, the idea that it is good to believe in God simply because if God exists, belief leads to infinite bliss and disbelief to eternal torment, while if God does not exist, belief has only a finite dis-benefit (self-delusion for a few decades).

The biblical examples are followed by more complex dilemmas: in philosophy, the insoluble problem of achieving a fair division among competing goods; in political philosophy, how to resolve conflict by democratic means, including varied forms of voting.

Brams then returns to literature to deal with situations that involve frustration and anger, his examples being Macbeth's dilemma as to whether to kill Duncan, and the strategy of withholding sex in Lysistrata. He proceeds to look at the aftermaths of wars including the Franco-Prussian war, the two world wars and the American Civil War to show that, in general, game theory supports Churchill's maxim, "In victory, magnanimity".

Finally, Brams looks in detail at the very complex games that occur when two players are seeking to resolve a situation in which incomplete information exists, and where each player is trying to learn more about the other. The case in literature is Hamlet, where the Prince spends most of the play trying to be sure that his stepfather was a murderer and worthy of death. In the real world, two classic cases are the Cuban missile crisis, where the two players Kennedy and Khruschev managed to resolve the game satisfactorily (fortunately for the human race), while in the Iran hostage crisis Carter did not, because of his misperception of Khomeini's motives. His last game is the classic dilemma game of Catch-22, and its many related parallels in the real world (e.g. the torture of witches to elicit confessions). He shows that 12 of Von Neumann's games are varieties of Catch-22. (You can read more about game theory and the Cuban missile crisis in this Plus article.)

Brams ends by stating "Game theory and TOM will not, and should not, replace other modes of enquiry in the humanities," but that they are "especially useful, and sometimes even indispensable, in elucidating the strategic role that conflict and cooperation play in human affairs".

Peter Wadhams is Professor of Ocean Physics and Head of the Polar Ocean Physics Group based in the Department for Applied Mathematics and Theoretical Physics at the University of Cambridge.

Game theory models are ubiquitous in economics, common in political science, and increasingly used in psychology and sociology; in evolutionary biology, they offer compelling explanations for competition in nature. But game theory has been only sporadically applied to the humanities; indeed, we almost never associate mathematical calculations of strategic choice with the worlds of literature, history, and philosophy. And yet, as Steven Brams shows, game theory can illuminate the rational choices made by characters in texts ranging from the Bible to Joseph Heller's Catch-22 and can explicate strategic questions in law, history, and philosophy.

Much of Brams's analysis is based on the theory of moves (TOM), which is grounded in game theory, and which he develops gradually and applies systematically throughout. TOM illuminates the dynamics of player choices, including their misperceptions, deceptions, and uses of different kinds of power.

Brams examines such topics as the outcome and payoff matrix of Pascal's wager on the existence of God; the strategic games played by presidents and Supreme Court justices; and how information was slowly uncovered in the game played by Hamlet and Claudius. The reader gains not just new insights into the actions of certain literary and historical characters but also a larger strategic perspective on the choices that make us human.