Number lovers around the world received a special treat this Christmas: on December 21, 2018, the discovery of a previously unknown prime number was announced.

has an impressive 24,862,048 digits, which makes it the largest prime number known to humanity. 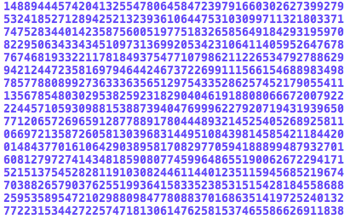 Some of the nearly 25 million digits of the newly discovered prime.

Primes are natural numbers that can only be divided by 1 and themselves. The first five primes are 2, 3, 5, 7, and 11. People have known since the time of the ancient Greeks that there are infinitely many prime numbers, but there is no quick and easy way to find them all. This is why every new discovery of a prime number makes mathematical headlines.

The latest addition to the list of known primes was discovered by the Great Internet Mersenne Prime Search (GIMPS), a grassroots computing project in which volunteers download a free program which searches for prime numbers and run it on their computers. Everyone lucky enough to find a new prime gets a cash reward.

This time around the lucky discoverer was Patrick Laroche from Ocala, Florida, who has been using GIMPS software to stress test his computer builds for years. He only started actually hunting for primes recently and was rewarded after less than four months on only his fourth try. It's an extremely lucky find: some GIMPS prime hunters have searched for over twenty years without success. Laroche is eligible for $3,000 in cash as a reward.

is a known prime (for the new discovery,

). It's quicker to test whether these Mersenne numbers, as they are called, are prime then it is to test other numbers. But this doesn't mean it's an easy feat: the proof that the latest discovery really is prime took twelve days of non-stop computing on a machine with an Intel i5-4590T CPU.

is twelve: that's three times as many as the formula would suggest. "This anomaly is not necessarily evidence that existing theories on the distribution of Mersenne primes [are] incorrect," says the GIMPS website. "However, if the trend continues it may be worth further investigation."

Mersenne primes are interesting for another reason too. Since the time of the ancient Greeks, and perhaps before, people have been beguiled by perfect numbers: natural numbers which are equal to the sum of their proper devisors. The smallest perfect number is

. The next perfect number along is

is perfect. In the 18th century Leonhard Euler proved that every even perfect number arises from a Mersenne prime in this way.

The perfect number stemming from the newly discovered Mersenne prime is

and has over 49 million digits. We now know of 51 perfect numbers and 51 Mersenne primes.

Will we continue to find new Mersenne primes and perfect numbers? We can't be sure — mathematicians believe that there are infinitely many of both, so the supply will never run out, but nobody has been able to prove this. We also don't know if all perfect numbers are even, as the ones discovered so far, or whether there also are odd ones. These are some of the great mysteries of mathematics.

Interesting news. I missed it. Some years ago I've contributed to checking that Mersenne Prime candidates are true primes. And I learnt a lot about how it is done. At least about the theoretical stuff, not about how the computation is done with a FFT. And this "theoretical" stuff deals with the proof that enables to say if a Mersenne number is prime or not, which is called: LLT : Lucas-Lehmer Test, based on the name of the two guys who provided fundamental work. Lucas built the idea and he provided not-perfect proofs. And then later Lehmer provided complete and clear proof. How this LLT proof works is astonishing. Proving it may be very complex, but understanding how it works is easy and funny. I think that you should talk about this LLT mechanism here. I could help if needed. Contact me at: tony(.)reix[@]laposte(.)net . Regards. Grenoble. France

Secrets of 1 division to any prime number

Lets see the Secrets of Prime Numbers when I divide 1 to prime numbers I see the same occurence for example 1/13. Our number is 0.076923.

Besides, I did it for other small or very large prime numbers and come across more strange results :) Lets look..