A glimpse of Cantor's paradise

"No one shall drive us from the paradise which Cantor has created for us."
David Hilbert 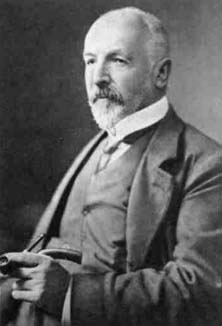 Modern ideas about infinity provide a wonderful playground for mathematicians and philosophers. I want to lead you through this garden of intellectual delights and tell you about the man who created it — Georg Cantor.

Cantor was born in Russia in 1845.When he was eleven years old his family moved to Germany and he suffered from a wistful homesickness for the rest of his life. At school he had a great talent for the violin, but his real gift and passion was for mathematics. As a university student in Berlin he was president of the mathematical society and met his friends every week in a wine house...to discuss mathematics! In 1872 he was appointed extraordinary professor at Halle, and began his life-long study of infinite sets.

The simplest infinite set is the set of natural numbers

How does this compare to other infinite sets? Consider, for example, the set You might say that it is "smaller" than the set of natural numbers, since it contains 100 fewer numbers. Cantor would object to your argument by drawing the following diagram:

The diagram shows that there is a one-to-one correspondence, or bijection, between the two sets. Since each element in

pairs off with one element in

and vice versa, the sets must have the same "size", or, to use Cantor's language, the same cardinality.

Using a bijection to compare the size of two infinite sets was one of Cantor's most fruitful ideas. The cardinality of

is not of course an ordinary number, since

is infinite. It's nevertheless a mathematical object that deserves a name, so Cantor represented it by the first letter in the Hebrew alphabet,

, (pronounce "aleph") with a subscript of zero:

"ln mathematics the art of proposing a question must be held of higher value than solving it." Georg Cantor

Take a moment to convince yourself that the array contains every single positive rational number. Numbers occur more than once as equivalent fractions, for example 1= 1/1 = 2/2, etc. Now we create a list of fractions by starting in the top left corner of the array and moving up and down diagonally:

If we omit those rationals we have met before, this gives the list

Any infinite set which can be listed is called countable because (given an infinite amount of time) you could go down the list and simply count "one, two, three...". Because of this simple bijection with the natural numbers, all infinite countable sets have cardinality

The second question Cantor considered in 1873 was the cardinality of the set of real numbers. The real numbers are all the points on the continuous number line, including irrational numbers such as

. The set of real numbers contains both the natural numbers and the rational numbers, but is it really "bigger" than both these sets? Cantor proved that it is. To see this assume that the real numbers between zero and one are listable. Imagine such a list:

But we started with the assumption that every real number between zero and one was on the list! Cantor proved that the only way to avoid this contradiction is to admit that our original assumption — that the set of real numbers and the set of natural numbers have the same cardinality — is false. 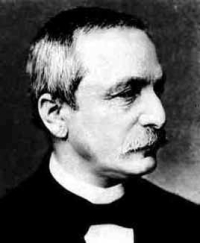 Leopold Kronecker: philosophy and theology, but no mathematics.

, the cardinality of the continuum.

The diagonal argument shows that

represents a higher order of infinity than

. Cantor adapted the method to show that there are an infinite series of infinities, each one astonishingly bigger than the one before.

Today this amazing conclusion is honoured with the title Cantor's theorem, but in his own day most mathematicians did not understand it. Some vehemently criticised his work. His old professor, Leopold Kronecker said

"I don't know what predominates in Cantor's theory — philosophy or theology, but I am sure that there is no mathematics there."

In January 1874 Cantor wondered if the points along a line of length 1 could be put into one-to-one correspondence with the points in a square of side length 1. Initially he thought that the answer was obviously "no", but he wanted a proof one way or the other. He was still working on this problem when he married Vally Guttmann in August 1874 — and spent most of his honeymoon discussing it with his friend and fellow mathematician Richard Dedekind.

It is easy to extend this argument to show that the points in a cube (or even in an n-dimensional hypercube) have the same cardinality as the points in a segment of the real line.

Cantor himself was so surprised by this discovery that he wrote: 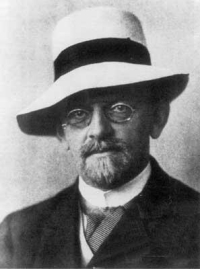 David Hilbert: one of the mathematicians who recognised Cantor's genius.

From 1884 onwards, Cantor suffered from bouts of depression during which he could not concentrate on mathematics. He was disappointed that his ideas were not widely accepted, his relationship with Kronecker grew worse and his long friendship with Dedekind suffered. At his lowest points he was given leave from the University, but during his lucid periods he continued to have brilliant ideas about the ordering of infinite sets. Cantor proved that there were a whole series of infinite cardinal numbers which could be listed in increasing order. The first of these is

, the cardinality of the natural numbers, and the others are denoted by

, the cardinality of the continuum. Cantor had shown that

— but was it equal to the next cardinal number on the list,

became known as the continuum hypothesis. Cantor spent the last years of his life struggling to find a proof one way or the other.

"The notion of a set is too vague for the continuum hypothesis to have a positive or negative answer." Paul Cohen

We now know that Cantor's mathematical toolkit was simply inadequate to answer the question. In 1940 (22 years after Cantor's death) Kurt Gödel showed that the continuum hypothesis cannot be disproved using standard mathematics, and after another 23 years Paul Cohen showed that neither can it be proved. Today mathematicians and logicians are still debating this fascinating question.

In 1899, after his youngest son and his younger brother died, Cantor's mental health and mathematical ability rapidly deteriorated. His last letters are to his wife Vally, written from a mental hospital, pleading to be allowed home. He died of a heart attack on the 6th of January 1918.

In 1904 The Royal Society of London honoured Cantor's life-long work laying the foundations of set theory and unravelling the mysteries of infinite sets by awarding him the Sylvester Medal, its highest award for mathematical research. 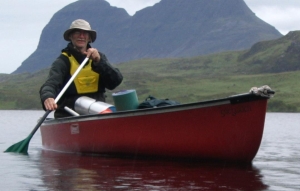 Peter studied mathematics and physics at the University of St. Andrews, taught in Cyprus, studied at Manchester University, and gained a PhD from Strathclyde University for research in marine dynamics.

When not exploring remote corners of Scotland, or practising ShotoBudo karate, he teaches mathematics at James Watt College in Greenock.

He lives on the Firth of Clyde with his wife and a large (but finite) number of children. He is a believer in the goodness and grace of God, and a lay preacher of the Christian Gospel.

Read more about...
history of mathematics
infinity
transfinite number
Plus new writers award 2008
what is infinity

I just looked this up after listening to A Brief History Of Mathematics from the BBC.
Nice level of detail!

Let's take a simple look at the method of mapping counting numbers to rationals:
https://www.aplusclick.org/t.htm?q=7897
You can't do it with a finite limit N, and its gets WORSE as N gets bigger. Then suddenly, and magically, infinity makes it all work itself out. NO! With convergent series things getter better as N gets bigger. With divergent series things get worse. This is a divergent problem handled badly.

Another Cantor related subject is the Cantor set, generated by taking the number line between 0 and 1 and removing the open inner third part an infinite number of times. The question is then asked as to what, if anything, is left: http://lesliegreen.byethost3.com/articles/counting.pdf