Building a bridge to maths

At last month's Cambridge Science Festival we decided to try and bring maths to the masses using one of our favourite puzzles. Our aim was to deliver a hands-on (or rather feet-on) activity that's fun and brings across the creative aspects of maths, but also links up to cutting edge mathematical research. We were really pleased with how it went, so we thought we'd share our game for others to put on at their own science or maths event. 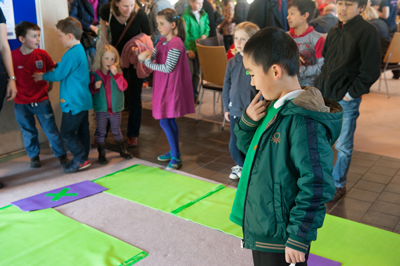 A young mathematician in action. (Photo by Alice Boagey, copyright University of Cambridge)

The game is based on a puzzle known as the Bridges of Königsberg which, unsurprisingly, originated in the Prussian city of Königsberg (now Kaliningrad) in the 18th century. Königsberg was divided by a river containing two islands, with the various land masses connected by seven bridges (see the image below). The task the people of Königsberg posed each other was to find a walk through the city which crossed each bridge once and only once.

At the science festival we recreated the lay-out of land, river and bridges using coloured yoga mats you could walk around on and challenged people to find the path the Königsberg people had been after. The challenge (and the colourful yoga mats) proved irresistible to many passing punters, especially the younger ones. The task is easy to explain and it seems easy to solve — as people watched person after person try but fail to cross all seven bridges, many decided to have a go themselves. You could see their brains ticking over as they were searching for that clever lateral thought that would give the solution. This elegant argument, so simple yet so clever, inspired real eureka moments and did a great job at bringing across the beauty and power of creative mathematical thought. You can illustrate it further by "blowing up" a bridge to make the problem possible. We asked people which bridge they'd like to have blown up and took that one away. With the correct number of land pieces now having an even number of bridges attached to them, the problem becomes not only possible but also easy, so even the youngest audience member can have a go.

When the great mathematician Leonhard Euler first came up with this argument in 1735 he laid the foundation for a field of mathematics known as graph theory. A graph is a collection of nodes (in our case pieces of land) connected together by links (in our case bridges). It's really just a network, and since networks permeate modern life, from road or rail networks to social networks and the internet, Euler's ingenious solution laid the foundation for an area of maths that couldn't be more relevant today.

The game is really easy to put on, here is how we did it.

This activity was inspired by content on our sister site Wild Maths, which encourages students to explore maths beyond the classroom and designed to nurture mathematical creativity. The site is aimed at 7 to 16 year-olds, but open to all. It provides games, investigations, stories and spaces to explore, where discoveries are to be made. Some have starting points, some a big question and others offer you a free space to investigate.