Celebrating the new year with a new prime!

Mathematicians are celebrating the new year with a new discovery – the largest known prime number. Prime numbers, those numbers that are only divisible by the number 1 and themselves, are central to number theory as any whole number can be written as a unique combination of prime numbers. This newly discovered prime has 23,249,425 digits, 910,807 digits more than than the previously known largest prime. According to GIMPS (the Great Internet Prime Search) if you were to write out the number five digits to an inch every second, then after 54 days you'd have a number stretching over 73 miles (118 km) – almost 3 miles (5 km) longer than the previous record prime. 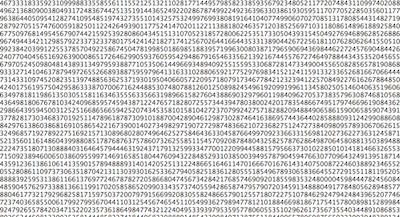 Mersenne numbers have been of interest to mathematicians since they were first discussed by Euclid in around 350 BC. Mersenne made a famous conjecture about which values of p would result in prime numbers: that only p = 2, 3, 5, 7, 13, 17, 19, 31, 67, 127 and 257 would result in a Mersenne prime, and any other prime p under 257 would give a composite Mersenne number. It took over 300 years for mathematicians to resolve his conjecture: he was wrong about 5 of the primes p less than or equal to 257 – 67 and 257 did not result in prime numbers and 61, 89, 107, which he missed out in his conjecture, did.

It is a challenge to prove that large numbers are prime, but some techniques are available for testing Mersenne numbers that arise from their form. GIMPS, the longest running grass-roots distributed computing project, turns these mathematical techniques into ingenious software that breaks the task up into many little pieces, each piece running in the background on volunteers' computers in whatever computing time they have available. This software, Prime95, is available for anyone to download and hunt for Mersenne primes – you could discover the next one! 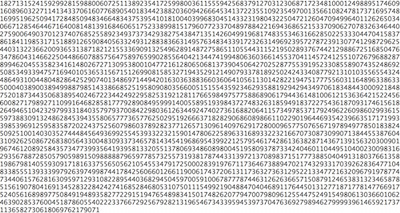 Jonathan Pace, from Georgetown, Tennessee, discovered the number on Boxing Day, 26 December 2017. Pace has been volunteering computing time to GIMPS for 14 years, partly through his work as a systems administrator for various community charities. As well as contributing to the hunt for large primes, the Prime95 software helps him remotely monitor the computers he administers as he is emailed if one of the computers on which he is running the software on doesn't check in with GIMPS.

The PC that found the new prime took six days of intense computation to verify that M77232917 was a prime number, and then the result was double checked on several other machines over the next week. Pace is now eligible for a $3000 GIMPS research discovery award for his contribution to the hunt for primes.

You can find out more, download all 23,249,425 digits of M77232917, and join the hunt for primes at GIMPS. And you can read more about prime numbers, including previous GIMPS discoveries, on Plus.

I think it is proven that

I think it is proven that there are infinite prime numbers.
So why do people seek for big primes?

It's within our human nature to want to learn and expand and push ourselves beyond our current knowledge and state of being. Why wouldn't you want to seek for more?

Mersenne numbers are very special because we have a VERY efficient method for proving one is prime : the LLT. Moreover, the more Mersenne primes we find, the more we learn n about them, leading for possible new knowledge. Moreover, the very complex programs used for checking these numbers help to check fundamental HW and SW tools.
Tony Reix
I helped the GIMPS to check 7 of the Mersenne primes they found.
I found : Mq = 2^q-1 = (3x)^2-(3qy)^2.

There is an interesting article about NP-Completeness and Mersenne Numbers on researchgate.
https://www.researchgate.net/publication/321160622_An_Overview_Of_Some_…