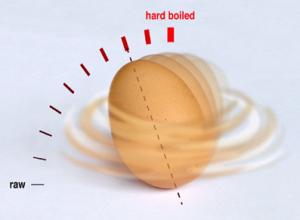 Suppose you had to distinguish between a raw egg and a hardboiled one - without cracking them open to see which was which. You might be stumped, unless you knew this old parlour trick: lie both eggs down on their sides on a table, and spin them as you would a spinning top. Try it a few times, and with luck, you'll get the cooked egg to rise up for a few seconds on one end as it spins. The uncooked one won't do any such thing.

Although mathematicians were pretty certain that gyroscopic forces had to be at the root of this strange phenomenon, until recently, noone could say for certain. But two mathematicians, Keith Moffat of Cambridge University and Yutaka Shimomura of Keio University in Japan, have now found the answer.

In a recent paper in the scientific journal Nature, the pair consider all the forces acting on a spinning egg-shaped object. They conclude that friction between the object and the surface it spins on produces a gyroscopic effect, which causes some of the kinetic energy of the object to be translated into potential energy, raising its centre of gravity. Gyroscopic effects are explained in Galloping gyroscopes, an article in Issue 7 of Plus. Although they seem strange to us, this is only because in normal situations our own bodies don't experience them, since we don't contain spinning parts.

Basically, as the hardboiled egg spins, its curved surface means it touches the tabletop at only one point. The contact point changes and traces out a little circle. If the texture of the tabletop is just right - the effect won't happen if the table is either too slippy or too sticky - the egg will slide just a little as it spins. This sliding slightly slows the spinning motion, introducing an instability, or wobble, into the spin of the egg. This in turn tilts the egg a little, raising one end off the table more than the other - and this is the point at which the gyroscopic effect kicks in, translating some of the kinetic energy of the spinning egg into potential energy, and raising its centre of gravity in a seemingly paradoxical way. The paradoxical effect is heightened by the fact that as the end of the egg rises, the egg draws in closer to the axis of spin, causing it to spin more quickly - just as figure-skaters can make themselves pirouette faster by raising their arms above their heads.

If you don't spin the egg fast enough in the first place, there will not be enough energy available for the effect to occur. You have to make it spin at about ten revolutions per second, which you can do with a firm flick of your wrist.

But why does the effect not appear when you spin a raw egg? To answer this, imagine what happens to the inside of the egg as it spins. The inside of the egg is runny, and so it lags behind the shell. This lag is like a drag effect on the egg, slowing the spin rate down and dissipating the egg's kinetic energy. This in turn reduces the friction between the egg and tabletop, and means that not enough energy is available to be turned into potential energy and raise the egg's centre of gravity.

The authors say that they worked on the problem for fun, in their spare time, and that they can't see any particular application for their work. Although, as Moffat says, "you never know with these things. I just thought it was a nice, amusing problem." Amusing for him, maybe - but less amusing for his wife, who had to put up with him repeatedly raiding the fridge for eggs to experiment with!

As well as solving the mystery of the balancing egg, Moffat also found time to write the following limerick to commemorate the event:

"Place a hard-boiled egg on a table,
And spin it as fast as you're able;
It will stand on one end
With vectorial blend
Of precession and spin that's quite stable."