On the 29th of March 2006 a total eclipse of the Sun will be visible from a narrow strip of land that starts in eastern Brazil and ends in western Mongolia. Much of Northern Africa, Europe and Central Asia will experience the Moon's journey across the face of the Sun as a partial eclipse. 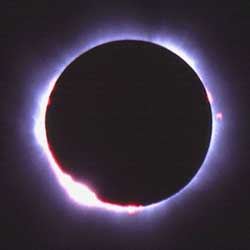 A total eclipse of the Sun

A solar eclipse occurs when the Moon passes in front of the Sun and partly or wholly obscures the Sun's bright disk. If the Moon's orbit around the Earth lay in the same plane as that of the Earth around the Sun, then a solar eclipse would occur with every New Moon, roughly once a month. In reality though, the Moon's orbital plane is tilted by five degrees with respect to that of Earth and Sun. The New Moon finds itself close to the Earth-Sun orbital plane only twice a year, during the eclipse seasons, which are roughly six months apart. About every one to two years, Moon, Earth and Sun line up in such a way that — viewed from certain places on Earth — the Moon appears large enough to exactly blot out the Sun. The Moon's umbral shadow sweeps the Earth in a narrow path at over 1700 kilometres an hour. On this path the eclipse is total: all that's visible of the Sun is its outer atmosphere — the corona — which appears as a flaming halo of the darkened Moon. A strange twilight descends on the world; birds and other animals cease all their activities and everything becomes eerily silent.

Diagram of a total eclipse. Not to scale.

A total eclipse is a spectacular event, and if you haven't seen one, you might want to travel to a place where you can. This time, the Moon's umbral shadow will make its way from eastern Brazil, across the Atlantic, over several North African countries and a large part of the Sahara, into southern Turkey and finally into western Mongolia. If you are really serious about seeing the eclipse, you should probably head for the Sahara, where it will not only last longest — four minutes and seven seconds — but where the skies will most likely be clear, affording you a perfect view. If that sounds a bit too out of the way and you'd like something a little more tourist-friendly, you could consider the Turkish city of Antalya, which will also be visited by the full shadow of the Moon and — being a modern city on the shores of the Mediterranean — offers a few more creature comforts. 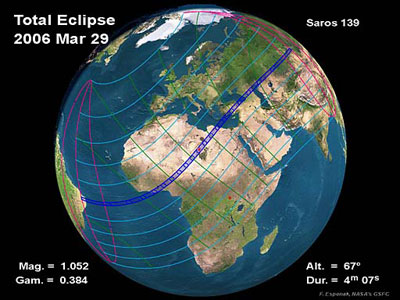 Along the blue path the eclipse will be seen as total. Image courtesy of NASA.

If you can't travel at all and don't live within the shadow's path, there is still some consolation if you are on the northern hemisphere and on the same side of the globe as Africa. In these places the eclipse will be partial — not quite as spectacular but still a fascinating event. Whatever you do, remember not to look at the Sun directly with the naked eye, even when it is totally eclipsed: you may damage your eyes permanently and even go blind. One of the safest ways to experience the eclipse is to build yourself a pinhole camera and view it by projection. Alternatively, you can use specially designed glasses like those that were distributed in the UK for the 1999 total eclipse.

And if you are unlucky enough to miss out on the experience altogether, then hang on until the 1st of August 2008, when another total eclipse will traverse Canada, Greenland, Siberia, Mongolia and China.