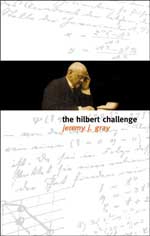 The Hilbert Challenge: A perspective on twentieth century mathematics

"As long as a branch of science offers an abundance of problems", proclaimed David Hilbert, "so is it alive". These words were delivered in the German mathematician's famous speech at the 1900 International Congress of Mathematics. He subsequently went on to describe 23 problems which he believed would spur on mathematical thought for the upcoming century. As Professor Jeremy Gray describes in his book "The Hilbert Challenge", Hilbert's aim was ultimately achieved. A small subset of these problems turned out to be trivial; the majority were finally solved, by some of the brightest minds of twentieth century mathematics; and a few remain unresolved or not solved in full generality, the most notable of which is the Riemann hypothesis. Most important of all, each problem provoked much discussion and helped focus the path of research that would dominate the next hundred years.

Gray, whose research interests include the history of 19th and 20th century mathematics, first takes the reader through Hilbert's student life. His early years as a mathematician, we find out, heavily influenced his choice of Problems. Moreover, his early successes were based on work from seemingly disparate branches of his subject. This helped establish Hilbert not only as a respected academic, but also proved he had a broad view of the whole realm of mathematics. Indeed, with the exception of Henri Poincaré, Hilbert alone was capable of giving a lecture with such grandiose ambitions - and succeeding. The author then goes on to describe the initial reaction to the lectures, the first attempts to solve the Problems, and in some cases, the controversy they generated in the mathematical community. The story continues through the wars, and interlaced throughout is the status of the Problems, and the successes and failures of those brave enough to tackle them.

Naturally, Grey's story does not end with Hilbert's passing in 1943. Even after 1945, Hilbert's unsolved Problems were still held in high respect and remained relevant up to the present. Finally, Grey treats us to a translation of Hilbert's original 1900 address, provides a glossary of important mathematical terms, and gives a summary of each Problem and the progress made in solving it.

What makes the "Hilbert Challenge" so engaging is the clever way that Grey intertwines the full mathematical details with the narrative. It can be appreciated by the non-mathematician, for the story is fascinating in its own right. But Grey certainly does not disappoint the more mathematically minded. Woven through the text are figures and boxes, containing the finer details of the mathematics described. These short paragraphs furnish the reader with a concrete and understandable idea of what sorts of problems these mathematicians were struggling with. Best of all, these short interludes are delivered in the style any competent later-year secondary student or undergraduate could appreciate.

Those interested in the philosophy of mathematics in the twentieth century will also find this book interesting. Grey is clearly fascinated by this aspect, and Hilbert's Problems illuminated many of the tensions that existed in the mathematics community. The battle between abstract theories and more concrete problem-solving, the existence of a complete axiomatization of arithmetic, and finally the role of mathematics in physics, were all issues that Hilbert was concerned with - and indeed that are still debated today.

"The Hilbert Challenge" proves to be insightful and readable, though at some points it can become slightly bogged down in details. The reader will surely be inspired by Hilbert's unyielding faith that all problems can be solved, certainly a heartening thought to any mathematician.

Hari K Kunduri is a second year PhD student at the Department of Applied Maths and Theoretical Physics at the University of Cambridge, under the supervision of Dr M.J. Perry. His research interests lie in branes in M-Theory.
Tweets by plusmathsorg