'The housekeeper and the professor' 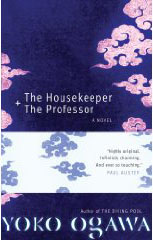 The housekeeper and the professor

A novel translated from the Japanese, where nothing much happens and prime numbers play a central role, may not sound like the most relaxing summer read, but Yoko Ogawa's latest work is a pleasure: a gentle, unpretentious and thought-provoking book. Those who know nothing about number theory may need to stop and re-read one of the almost two hundred pages, in order to appreciate the explanation of natural logarithms. But those who think they know their stuff will probably stop and re-read ten times as many different passages, halted in their tracks by startlingly poetic and visual descriptions of mathematics they haven't ever considered.

From the very start of this book we sense that the professor of the title — who, like the housekeeper, is never given any other name — is a stereotypical maths geek. His study smells of books and his desk is cloaked in dust. He's not interested in what other people wear, and even less in his own appearance. He follows baseball by obsessively analysing the statistics, but has never watched a game. And his only "friends" as a child were the numbers in his head. But when he suffers irreversible brain damage after a lorry careers head-first into the car he is driving, it is numbers that help him live on.

Stuck with a brain that stopped forming new memories seventeen years earlier, the professor is only ever able to remember the previous eighty minutes. He doesn't know how to operate the microwave, he mistakenly thinks his long-retired hero still bats for a top team and he forgets anyone who leaves the room for an hour and a half. He copes with this situation by cocooning himself in reminder notes pinned onto his well-worn suit, and by using numbers to help structure the unfamiliar world and people around him. When his housekeeper comes to the door for the first time, he asks her shoe size and phone number, drawing mathematical significance from each. Of course he doesn't remember that he asked her the same questions the day before, and the day before that.

For the professor, numbers and the relationships between them are a comfort, continuing as they always had, regardless of changes in the world. Indeed, his own relationship with mathematics is deeply personal. He berates the housekeeper who disturbs him at his desk, shocked she doesn't appreciate that "barging in here when I'm with my numbers is as rude as interrupting someone in the bathroom". He corrects her son's suggestion that there is no such number as the square root of minus one, by pointing at his chest and explaining, "Yes there is. It's in here." And when the housekeeper and her son want to make up for upsetting him, they sense the only way to do it is through numbers.

It is this passion for numbers, and for sharing their beauty and poetry with others, that helps the professor build a surprising but lasting friendship with the housekeeper and her son. The maths novices quickly become interested in prime numbers and mathematical puzzles, so much so that the housekeeper gets distracted from her chores by the "noble" prime serial number she finds on the refrigerator and the deceptive pseudo-prime printed on a discarded tax form. She even builds number pictures in her head, such as the twin primes who "had matching outfits and stood holding hands as they waited in the number line".

As the story progresses, we meet the full range of supporting co-stars in this number-heavy tale: prime numbers, divisible only by themselves and 1; perfect numbers, whose divisors add up to the number itself; amicable pairs, whose divisors add up to each other; and triangular numbers which line up in three-sided shapes. We come across the concept of zero and a handy formula for finding the sum of all numbers up to

, derived by the housekeeper as

, but more commonly represented as

And in the most moving scene of the book, we find the professor stopping a painful argument by silently writing one of the most beautiful equations in mathematics on a scrap of paper, placing it on the table and leaving the room. The housekeeper is left to research the meaning of

in the neglected mathematics section of the local library.

There may be no page-turning plot to keep you reading, but the book's depiction of the true nature and attraction of number-crunching is captivating. The truth, we are told, is waiting "somewhere out there in a place no-one knows, beyond all the beaten paths. And it's not always at the top of the mountain. It might be in a crack on the smoothest cliff or somewhere deep in the valley." The description of searching for primes through the desert wastelands of millions of numbers is even more evocative. And while many schoolchildren will be disappointed — just like the housekeeper's son — by the professor's assertion that "a problem isn't finished just because you've found the right answer," this reflects — just like the descriptions of intuitive thinking, pattern-spotting, trial and error methods and uncertainty — the reality of mathematical problem-solving in practice.

This could, of course, all be seen as one giant metaphor for the reality of human relationships in practice. And the professor's unique predicament certainly prompts questions about how we form relationships in the here and now, with no history to build on. But Yoko Ogawa and Stephen Snyder's light touch means none of this is over-laboured and you are left to draw your own conclusions, focusing on or ignoring the issues as you wish. One thing's for sure: whatever level you engage with The housekeeper and the professor, you're in for a charming read.

Children and the Professor

Children are the prime numbers, the building blocks from which the future is constructed. The child in the story is given the nickname root (because his head is flat like a square-root sign!). The square-root of a prime number is always irrational, not in the sense of not being logical but in that its expansion is never finished so you don't need to remember it, it is always developing in the present.