So you think you can add up? 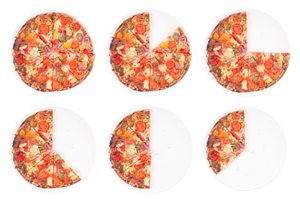 Perhaps the first great challenge we encounter as we learn maths is to add fractions. Although often treated as such, adding fractions is no unique art — after all, what is addition? It is just a uniting of objects which share some common ingredient. With whole numbers the shared ingredient is the number 1. It presents itself so naturally that we do not need to search for it. For example,

which is shortened to

But how about fractions? Even pupils who have mastered the addition of whole numbers may find

daunting. Mathematics may cherish symbols for their transcending of linguistic boundaries, yet by putting these compact notations into words, our sum not only takes on a more familiar look,

but reveals something crucial — we are presented with different ingredients: quarters and thirds. So how do we add them? Well, suppose we had a glass of wine and a cup of raisins — what would we have altogether?

because our wine and raisins are made from different amounts of the same constituent (a grape). So after the conversion, this looks just like our whole numbers example. And this is the key — we may not yet have found a common ingredient of thirds and quarters but, when we do, our example shows that (just as with whole numbers) we will be able to say something like this,

are different amounts of the same ingredient,

What could that same ingredient be? First notice that, since they are equal to quarters and thirds, our

must be expressible as fractions. That is, we can write

are whole numbers. These expressions allow us to pick our common ingredient. Say we choose to write them as

By choosing to write our equations in this way, we effectively nominate our common ingredient: we decide that

are the same. Setting

is a multiple of both 4 and 3. (Choice is a prominent feature of mathematics and this versatility allows us to solve some problems in many different ways. Henri Poincaré once even joked that "Mathematics is the art of giving the same name to different things".) 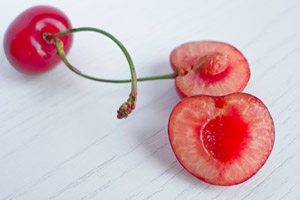 Whether it's halves or wholes: once you've found the common ingredient it's easy to add up!

can both be made from twelfths. Such commonality is usually described as a common denominator (as the number beneath the horizontal line of a fraction (12 here) is its denominator).

Substitution into our original sum

noting that we are now adding different amounts of the same object,

Be they whole numbers or fractions, adding objects does not differ in approach once you have found a common ingredient. Yet adding positive and negative numbers together involves no little subtlety. What is the common ingredient here? In finding it, we also discover the cause of the number line’s popularity when teaching arithmetic involving different signs.

All numbers with signs can be thought of as displacements: distances with direction. A number’s size gives a distance whilst its sign gives a direction. On the number line we can think of a positive number as an arrow (or, to use mathematical terminology, a vector) pointing a distance, which is given by the value of the number, to the right and of a negative number as an arrow pointing the distance that is given by the number to the left.

The plus operation then denotes a head-to-tail attachment of arrows. Their sum is equal to the arrow which begins at the tail of the first, and ends at the head of the last, arrow added. Viewing numbers in this way removes the obstacle of differing signs. For example,

results in a displacement of size 2 in the positive direction, equally describable by the notation

Although one of the most elementary lessons in our childhood, addition possesses a certain richness. We can bask in the knowledge that adding up is the single step that began this great journey into the modern world. 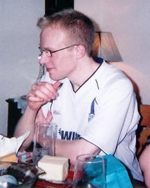 Andrew Irving received his PhD in applied mathematics from the University of Manchester, where his research focused on analytical techniques for biological networks. His current research interests also include Markov processes and collective behaviours. He also enjoys playing guitar and writing his own songs. 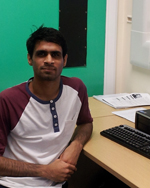 Ebrahim Patel is a postdoctoral researcher in the Mathematical Institute at the University of Oxford. He is interested in a variety of things, including discrete dynamical systems, max-plus algebra, Premier League footballer analysis and complex systems in general.

"But how about fractions? Even pupils who have mastered the addition of whole numbers may find 3/4 + 2/3 daunting. "

No doubt this would be daunting if the student is expected to jump straight from whole numbers to fractions that have different denominators and add up to >1. But luckily for the students in my locality, the teachers would be staging the learning materials in smaller skill steps.

The pizza pictures gave me great hope for this article; my students are immediately engaged and quickly become highly skilled when we draw and calculate 1/4 + 1/4 pizza makes 2/4 pizza which, hey presto is the same as 1/2 pizza. This fractions stuff is really easy and interesting - insight and great joy!

The rest of the explanation, via algebra and Greek letters, frustrated me. Yes, it follows a logical thought process, but no additional enlightenment, more an intellectual investigation for the benefit of the writers.

But then the extension of the idea to 'Adding up negative numbers'. Great, I thought, I'm always looking for concrete examples to help with the concept of ' +- = - ' etc.

Where does the adding 'up' in the heading fit within the practice of precision in formulating mathematical sentences? So the popularity of a number line when working with adding negative numbers can be explained using vectors, displacement, head-to-tail attachment of arrows?

Aah - of course! Now how can I fit 'displacement, vectors and head-to-tail atachment' in the the teaching programme before 'adding negative numbers'? Perhaps that's how the visiting teachers from Shanghai do it?

Interestingly, a TED talk came out after this article was published which shared some of the same ideas. See the link below.