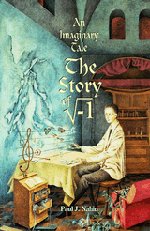 An imaginary tale: The story of √-1

Engineers often consider mathematics a necessary evil rather than a pursuit in itself. The author of An imaginary tale, Paul J. Nahin, is therefore a rare find. An electrical engineer with a self-confessed passion for building gadgets from Popular Electronics magazine, Nahin clearly adores maths! His boyish enthusiasm for algebraic puzzles, the romance of mathematical discovery and the almost magical power of complex numbers courses through every page of this in-depth text.

An imaginary tale is the story of the square root of minus one, a number we find variously described as "obvious nonsense", "absurd", "impossible", "paradoxical", "fictitious", "beyond the pale", "mystical", "sophisticated", "subtle" and, more familiarly, "imaginary". Nahin's historical and mathematical tour of complex numbers and functions stretches across two millennia and features a melting pot of awfully clever people. It's a tale of uncomfortable answers, head-scratching problems, near misses and conceptual breakthroughs.

The square root of minus one was such an unlikely concept for early mathematicians that they simply avoided or ignored it. In his first century AD publication, Stereometria, it's not clear whether Heron of Alexandria represents

) in error or as a deliberate fudge. For centuries after, mathematicians still viewed physically meaningless negative numbers as problematic and were desperate to steer clear of difficult expressions such as

It wasn't until the sixteenth century that these "mental tortures" were put aside in an effort to find the real roots of cubic equations. "Manifestly impossible" numbers were first manipulated according to the usual rules of algebra. A hundred years later, John Wallis struggled with the geometric interpretation of imaginary numbers (a term coined by René Descartes in 1637). Finally, despite earlier overlooked breakthroughs by others, Carl Friedrich Gauss "made possible the impossible" in 1849. Even then, the grudging acceptance of his description of

, as a 90 degree rotation operator was hardly an overnight success.

An imaginary tale is difficult to pigeonhole. The publishers describe it as a history text, the author as a book accessible to high school seniors (although he also indicates it may be easier for those with an understanding of "freshman calculus"). In fact it's really a book of three parts, with potential audiences from laypeople to undergraduate physicists, engineers and mathematicians.

A reader with little or no mathematics background could happily appreciate the tales of intriguing historical figures (who'd have thought the human heroes of this story would include a French gentleman officer, the royal chaplain to King Charles II, an Italian swamp drainer, a Norwegian surveyor, bigots, ne're-do-wells and code crackers?) and the demonstration of mathematics as an evolving discipline, complete with experimental explorations, discoveries and inventions. But Nahin simply loves showing off beautiful equations, graphical tricks, awesome solutions and diabolic challenges. To get the most out of this book, you'll need a sharp pencil, a thick wad of scrap paper and knowledge of algebra, geometry, trigonometry, calculus and power series. Working through every step of the numerous demonstrations is the only way to really appreciate the magic on display!

The first three chapters are squarely historical, introducing us to the challenges of

and the breakthroughs of Wallis, Caspar Wessel, Jean-Robert Argand and Gauss. There's plenty of mathematics to work through along the way as we solve irreducible cubics, graphically find complex roots and derive trigonometric identities from de Moivre's theorem. Throughout, anecdotal histories are seamlessly interwoven in a conversational approach to mathematical exposition.

Chapters four and five introduce the concept of complex numbers as vectors and present a rack of practical case studies, including relativistic travel, hyperspace wormholes and electrical circuits. Focusing on the mathematics, Nahin emphasises how the once meaningless

can aid analysis of many real phenomena. For example, he uses complex exponentials to help understand the mathematics behind the apparent periodic changes in direction of planetary bodies moving across the night sky. To fully engage with these new topics, we are necessarily introduced to some background physics, all treated in a historical context.

In the longest and toughest chapter, Wizard mathematics, Nahin lets rip on the use of complex numbers in challenges such as Euler's identity, the infinity of primes, the Riemann hypothesis, hyperbolic functions and the "miracle" of calculating

. Only the most adept mathematicians will follow everything in this chapter, but those lucky few will fall under the spell of Nahin's magic wand, oohing and aahing at the incredible results of manipulating complex numbers.

The story concludes at the end of the nineteenth century, with an introduction to complex function theory covering Cauchy's integral formulae. Of course, the real story doesn't stop there and some may ask why we don't find conformal mappings or fractals here. But at almost 300 pages, and a lot of scribbled calculations, there's still plenty to keep us occupied.

In this first paperback edition, Nahin delights at the opportunity to correct a number of minor typos and errors. It is strange however that he has not incorporated all these updates in the main text, simply alluding to some in the preface to the paperback edition. Readers should check themselves so they know which parts of the text are correct and which may need a quick update.

As an engineer, Nahin was always going to back the square root of minus one as an important and useful number with many practical applications. But An imaginary tale is more than a story of usefulness. This accessible and thoroughly researched work lays open the wizardry of complex numbers, exemplifying the pure pleasure of learning what the author himself describes as "pretty mathematics". If you share his passion, he won't leave you disappointed.

Anna Faherty read physics at Cambridge before working in publishing for fifteen years. She commissioned the Modular Mathematics Series and recently edited Mathematics: 50 things you need to know. Anna is now a freelance writer and consultant working with a diverse range of clients including the Science Museum, the National Maritime Museum and Time Out London Guides.

Today complex numbers have such widespread practical use--from electrical engineering to aeronautics--that few people would expect the story behind their derivation to be filled with adventure and enigma. In An Imaginary Tale, Paul Nahin tells the 2000-year-old history of one of mathematics' most elusive numbers, the square root of minus one, also known as i. He recreates the baffling mathematical problems that conjured it up, and the colorful characters who tried to solve them.

In 1878, when two brothers stole a mathematical papyrus from the ancient Egyptian burial site in the Valley of Kings, they led scholars to the earliest known occurrence of the square root of a negative number. The papyrus offered a specific numerical example of how to calculate the volume of a truncated square pyramid, which implied the need for i. In the first century, the mathematician-engineer Heron of Alexandria encountered I in a separate project, but fudged the arithmetic; medieval mathematicians stumbled upon the concept while grappling with the meaning of negative numbers, but dismissed their square roots as nonsense. By the time of Descartes, a theoretical use for these elusive square roots--now called "imaginary numbers"--was suspected, but efforts to solve them led to intense, bitter debates. The notorious i finally won acceptance and was put to use in complex analysis and theoretical physics in Napoleonic times.

Addressing readers with both a general and scholarly interest in mathematics, Nahin weaves into this narrative entertaining historical facts and mathematical discussions, including the application of complex numbers and functions to important problems, such as Kepler's laws of planetary motion and ac electrical circuits. This book can be read as an engaging history, almost a biography, of one of the most evasive and pervasive "numbers" in all of mathematics.